The beat goes on with Gilpin school musicians 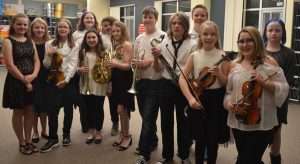 Variety was key at the Gilpin County Middle and High School fall concert on Thursday, October 11. Band and choir members were directed by music teacher Randi Ebers. Audience members gathered in the school auditorium for an evening of musical entertainment featuring strings, woodwinds, brass, vocals, a rain stick, and even a broomstick.

The band began with rousing tunes, including “When the Saints Go Marching In” and “Eagles Fight Song” composed by former Gilpin band director Lon Huckaby. “Debonair Dragon” posed a challenge for the band members just learning to play half-step tones.

“I also had to explain what ‘debonair’ meant!” joked Ebers.

And just when you thought it was safe to back into the bedroom … under the bed lurks the “Return of the Dust Bunnies.” Highlights of this tune included vacuum sound effects, shrieks, flute trills, special percussion sounds, and staccato plucking on the violins and viola. At the end, sixth-grader Max Peeples swept everything under the rug with his custodian’s broom.

The choir paid tribute to America with the “Star Spangled Banner” and “Celebrate America!” and honored our veterans with “Thank You Soldiers.”

“Thank you, oh thank you, men and women, brave and strong. To those who served so gallantly, we sing this grateful song.” The choir will perform the song again at the school’s Veterans Day program in November.

“Payphone” featured one student making the graceful motions of American Sign Language. “Shadowland” from Lion King Jr. highlighted the vocals of Jaden Schott. The “rattle, rattle, clink, clank” of “Dry Bones,” a fun arrangement of the traditional American spiritual, contained clever countermelodies and spoken sections. “Double Trouble,” from Harry Potter and the Prisoner of Azkaban was appropriate during this Halloween season. The Native American melody “Rain Dance” featured Aucklynn Sacco handling the rain stick, a long, hollow percussion instrument filled with small pebbles or beans that when tilted, made the sound of falling rain. Emma Hardy played xylophone on that number.

The program ended with “Popular” from the musical Wicked, a song about a popular girl trying to help her unpopular roommate become more popular.

END_OF_DOCUMENT_TOKEN_TO_BE_REPLACED

Where the dead get to tell their story By Jaclyn Schrock On Saturday, August 21, the Gilpin Historical Society held their annual Cemetery Crawl. Tickets allowed the shuttle of hundreds of guests from the Teller House parking lot to the Cemetery. Depending on v... END_OF_DOCUMENT_TOKEN_TO_BE_REPLACED

Benefitting the county, schools, and much more By Don Ireland   This year marks the 30th anniversary of casinos opening in the former little mining towns of Black Hawk, Central City and Cripple Creek, Colorado. In those early years, smoking was allowed inside ... END_OF_DOCUMENT_TOKEN_TO_BE_REPLACED