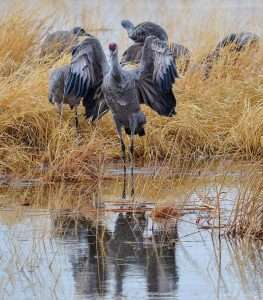 Mark your calendars for the 37th Monte Vista Crane Festival, scheduled for March 6 – 8, 2020. Ticket sales for the tours, speakers, movies and other events will go live on January 2 at www.mvcranefest.org. The annual festival celebrates the remarkable journey of some 25,000 Sandhill Cranes through the San Luis Valley each spring—a migration that begins in southern New Mexico’s Bosque del Apache National Wildlife Refuge and ends at the crane’s nesting grounds around Colorado’s Yampa Valley and other natural areas further north. While passing through the Valley, the tall, elegant birds gather by the thousands in and around the Monte Vista National Wildlife Refuge. Refuge staff manages the onsite wetlands and barley fields specifically to attract cranes and other wildlife. “The wetlands offer nighttime roosting sites,” said refuge manager Suzanne Beauchaine. “The barley fields are mowed just before the festival, providing a virtual smorgasbord for the cranes.”

The cranes feed on the fallen grain and small animals attracted to the food. “If you watch closely, you may see a crane spear a vole or mouse with its long beak and toss it to its partner,” Beauchaine said. “You’ll also see cranes hop and dance in courtship and hear the collective sound of their calls, which is breathtaking, especially with the majestic Sangre de Cristo Mountains in the background.”

This year’s festival includes crane and hawk-viewing tours as well as expert-led excursions to Elephant Rocks, Blanca Wetlands, the Scott Miller Archaeological Site and a private conservation site protected under the Rio Grande Headwaters Land Trust. Local ornithologist John Rawinski will return to lead bird walks around the Home Lake natural wildlife area (the bird walks sold out quickly in 2019). The wildly popular craft and nature fair will once again be held in the Monte Vista’s Ski Hi Building, with live birds on display from Hawks Aloft, a raptor rescue and rehabilitator out of New Mexico.

This year’s keynote speaker is the Colorado-based historian and Theodore Roosevelt reenactor Kurt Skinner, who whisks audiences of all ages back to a time when the former president imprinted on Americans a love of the natural world. Roosevelt’s “Conservation Crusade For America” set aside some 230 million acres of wild America for posterity. Roosevelt is well-known for his fight to save America’s natural treasures and an impressive legacy of federal resource conservation and wildlife protection.
Other speakers include Cleave Simpson and Max Ciaglo. Simpson is general manager of the Rio Grande Water Conservation District (RGWCD) in Alamosa, Colorado. His  talk—“Dealing with Water”—will spotlight water issues facing the Rio Grande Basin and San Luis Valley and how legal battles pit surface and groundwater users against each other. Ciaglo, a local ecologist, will present on the “Cranes for Grains” project—a unique partnership between Colorado Open Lands, U.S. Fish and Wildlife Service and Miller Coors. During their stopover in the San Luis Valley, Sandhill Cranes subsist almost entirely on waste barley from private farm fields after harvest. “Cranes for Grains” works with private barley growers to manage this vital food resource for cranes.

This year’s featured movies are “Rango” and “Bird of Prey.”

“Rango” is a good, old-fashioned (animated) western about a less-than-courageous chameleon who unwittingly ends up in the town of Dirt, a lawless outpost populated by desert creatures. As the new sheriff, Rango becomes the town’s last hope from a greedy developer’s water grab.

Winners of the Kid’s Crane Coloring Contest will precede the movie.

“Bird of Prey” weaves together stunning footage of the critically endangered Great Philippine Eagle with the remarkable story of wildlife cinematographer Neil Rettig and a small group of conservationists from the Philippine Eagle Foundation—who work tirelessly to save the bird from extinction.

Please note that all tours, speakers and movies require a ticket this year for admittance. For schedule and ticket information, visit www.mvcranefest.org.

Also please note that the crane festival is organized every year by a dedicated group of volunteers who depend on sponsorship dollars to support the event. Without sponsorship, the crane festival would not happen. Folks interested in supporting this important community event, please email mvcranefest@gmail.org or call 720-940-7561.

END_OF_DOCUMENT_TOKEN_TO_BE_REPLACED

Benefitting the county, schools, and much more By Don Ireland   This year marks the 30th anniversary of casinos opening in the former little mining towns of Black Hawk, Central City and Cripple Creek, Colorado. In those early years, smoking was allowed inside ... END_OF_DOCUMENT_TOKEN_TO_BE_REPLACED