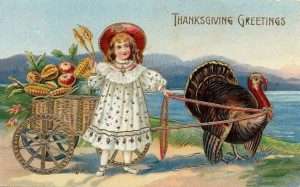 A rare holiday for miners reserved for ‘prayin and eatin’

The story of the first Thanksgiving is perhaps one of the best known and most mythical stories in American history, and while its importance is doubted by few, the holiday itself was slow to take hold. Between the time of the American Revolution and the Civil War, each state decided when to mark its own Thanksgiving. By the early 19th century most states had settled on the last Thursday in November for the holiday, but not until 1863 did Abraham Lincoln make it official that Thanksgiving would be celebrated on the last Thursday in November. But, even then, some states, especially those in the south who denied Lincoln’s presidential authority, ignored his declaration and continued to choose their own days for it. Not until the end of Reconstruction in 1877 did every state fall in line with Lincoln’s decision on the date. It remained the final Thursday in November until 1941, when Franklin D. Roosevelt signed a joint Congressional resolution moving the date to the fourth Thursday in November.

The early Thanksgiving celebrations in Gilpin County were one of the rare holidays that miners had off from work. With the Civil War still raging in the rest of the country at the time that Lincoln moved the holiday to the last Thursday in November, proclamations from the territorial governors urged the people of Colorado to be thankful that the territory had been spared from the terrible battles going on elsewhere. Gilpin County’s newspapers dutifully printed every Thanksgiving proclamation issued by both the presidents and the territory’s governors, giving them a place of importance on the first page of the newspapers. In 1870, for example, the Daily Register Call printed Governor Edward McCook plea for Coloradans to be thankful “for exemption from war, pestilence, and famine, for plentiful harvests, for increased prosperity, and for all the abundant blessings.” Echoing McCook’s sentiments, the newspaper wrote that “our lode mines have yielded more than during any previous year both in gold and silver, and many new and valuable discoveries have been made,” and that railroads “bring us nearer to the homes we have left in the East.”

The holiday was a chance for Gilpin County’s residents to celebrate, and they did so in a number of ways. Many churches and other organizations sponsored lectures the Wednesday evening before. Churches also took the opportunity to hold fundraising festivals the night before, and the Daily Register Call reported that the Methodist festival was especially well attended, raised a great deal of money for the church, and that “people…appeared to enjoy themselves as much as people can at such places.” Church services on Thanksgiving Day were also important events, and the newspapers dutifully listed each church in Black Hawk and Central City and what time their Thanksgiving services would be. In 1863, the Daily Mining Journal reported that the Rev. King’s Thanksgiving lecture at Lawrence Hall in Central City was “most eloquent, original, and effective,” and expressed its hope that his remarks would be printed in booklet form.

Music and dancing were also an important part of the Thanksgiving celebrations in Gilpin County, and the Daily Register Call reported prior to Thanksgiving 1868 that “something rich is on slate for next week, Thanksgiving night or the night before…” The preparations for the grand surprised had been kept secret for some time, but a few details were leaked in order to allow the newspaper to print a small article about the event. Though details afterwards were sparse, the evening was full of “fun, music, and a fair assortment of deviltry.”

Of course not everyone showed proper respect for the holiday. The first legal execution in Colorado came in December 1863, when William Van Horn of Central City was hanged for shooting Josiah Copeland, an acquaintance of his lady friend, Nancy Spence. After being arrested for the murder in October, Van Horn was held in the jail at Central City, where a few of his friends brought him a pie on Thanksgiving Day. Inside the pie was a long steel knife, which Van Horn fashioned into a crude saw, apparently with the intention of removing his irons. His guards stopped him before he could do so, and he was taken to the jail in Denver where he was held until his being returned to Central City the day before his execution.

Most people preferred their Thanksgiving pies without steel knives in them, and eating was a very important part of Thanksgiving in Gilpin County. Between each listing for church services in the newspapers were reminders that fresh turkeys were available at the stores in Black Hawk and Central City (at a cost of $3). In 1868, the publishers of the Daily Register Call informed their readers that, like other people, they wanted to enjoy Thanksgiving and so there would be no paper issued on Friday. In a move that would still ring familiar today, they wrote that “the Register proposes to obey the ‘time honored custom’ of attending prayer ‘and eatin’ on this blessed day afforded by Andrew Johnson.”

END_OF_DOCUMENT_TOKEN_TO_BE_REPLACED

Where the dead get to tell their story By Jaclyn Schrock On Saturday, August 21, the Gilpin Historical Society held their annual Cemetery Crawl. Tickets allowed the shuttle of hundreds of guests from the Teller House parking lot to the Cemetery. Depending on v... END_OF_DOCUMENT_TOKEN_TO_BE_REPLACED