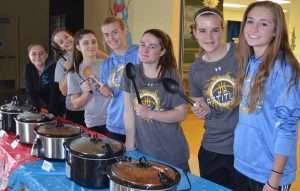 Members of Gilpin’s emergency services do so much for this community, much of it behind the scenes. Every day, they put others first. As a way to say “thank you,” the Gilpin High School girls’ basketball team ladled up a warm holiday meal to local law enforcement, firefighters, and ambulance personnel in the school cafeteria on Friday, December 16.

“Thank you for your service!” “Thank you for all you do!” read the signs, bearing the name of each agency and the autographs of the athletes.

Every first responder who was available showed up for tasty chili with all the fixings. Crockpots brimmed with gluten-free turkey, beef, chicken, and veggie chili. Members of the varsity and junior varsity basketball squads also served an impressive choice of cookies, pumpkin pie, cheesecake, and cupcakes frosted in red and green or topped with cheery plastic penguins. There were even candy canes with sweet notes attached.

Jenny Lepro, mother of junior varsity player Cicely Lepro, came up with the idea for the lunch. Lepro works for the City of Golden Police Department in animal and code enforcement, and also works part time for dispatch. She said that Golden puts on a thank-you meal for the responders there, and she wanted to pay it forward by doing the same for Gilpin’s responders. Many of them are parents of athletes and perform ambulance, police, or paramedic duty at the games.

“They do so much behind the scenes to keep us safe,” Lepro said. “We wanted to thank them and also teach the girls to show appreciation.”

Before the meal, the girls had basketball practice from 9:00 a.m. to 11:00 a.m. After their practice, the girls decorated the cafeteria and made the thank-you signs.

They had played Rocky Mountain Lutheran in the Gilpin gym the previous evening and were going to Lake County the next day for another game. Since the girls were so busy with sports and school, parents prepared the chili and desserts.

Lepro advised that any leftovers would be sent back to those in the various departments who were not able to come.

The gesture warmed up Gilpin’s responders on a cold day and meant a lot to those who do so much.

Gilpin Ambulance paramedic Dan Wall said, “I have been in this business for 27 years, and no one has ever invited me to anything like this until now. It’s very special.”

“This is awesome. It brings everyone together,” agreed Shelby Nation of Central City Fire Rescue.

The Lady Eagles continued to serve others during winter vacation. On Monday and Tuesday this week, they taught basketball skills at a hoops camp for both girls and boys from early elementary through middle school.

Girls’ Head Coach and Gilpin’s Athletic Director Jeff Schuessler said this camp has been a fixture at Gilpin for many years, and some of the high school players participated in the camp themselves as young children.

Schuessler was proud of his team for the way they have served others. “It’s indicative of the type of group they are. Their priorities are in the right place.”

END_OF_DOCUMENT_TOKEN_TO_BE_REPLACED

Benefitting the county, schools, and much more By Don Ireland   This year marks the 30th anniversary of casinos opening in the former little mining towns of Black Hawk, Central City and Cripple Creek, Colorado. In those early years, smoking was allowed inside ... END_OF_DOCUMENT_TOKEN_TO_BE_REPLACED

Where the dead get to tell their story By Jaclyn Schrock On Saturday, August 21, the Gilpin Historical Society held their annual Cemetery Crawl. Tickets allowed the shuttle of hundreds of guests from the Teller House parking lot to the Cemetery. Depending on v... END_OF_DOCUMENT_TOKEN_TO_BE_REPLACED