TFPD Board works on 2015 budget 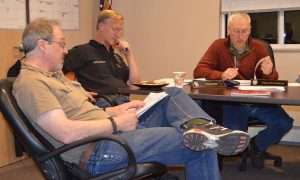 Summaries of public comments about hiring a new chief, as well as special meetings of September 22 and October 9, are presented in a separate article in this issue.

The Board reviewed the unaudited financial statements for September. Total assets were $5,997,367, including the balance in checking and savings of $655,682, retirement investments and property taxes receivable of $1,780,553, and total fixed assets of $3,413,643.

The September credit card summary showed $3,521 in charges for Jennings, including $450 to Lakewood Imaging for an MRI, for which no receipt had been turned in. Hinderman said she had been having difficulty getting Lakewood Imaging to bill workman’s comp. Crawford offered to assist in resolving the matter.

Henrikson noted, “67 percent of the budget had been spent, which is about where we ought to be.” Wenzel questioned why workman’s compensation was over budget by 115 percent, and Hinderman responded that some of the overage was due to Jennings’ salary change and the moving of one employee from part-time to full-time. She added that the workman’s compensation is billed one year in arrears.

Most general fund expense items year-to-date appeared routine in the budget; a few other items that were over budget included the service awards dinner (over by 182 percent at a cost of $4,551); business meals (over by 119 percent at $2,398); and hourly wages for maintenance/training staff (over by 246 percent at $18,451).

No new volunteer members will be accepted until spring 2015.

Surrounding local agencies have been contacted regarding TFPD’s recent changes in command, and all are cooperative and supportive.

There were 31 calls in September, generally routine. Carder elaborated on a difficult call where two patients had to be placed on helicopter and ambulance. Nederland Fire and Medic 1 had also responded, and the entire call took only 54 minutes from initial summons to wrap-up. “I’m proud of the response,” Carder noted.

The maintenance job description has been rewritten; maintenance staff will begin responding to calls on a paid basis while on shift.

Caleb Kropf was praised for assisting with numerous information technology issues, and Paul Ondr was thanked for his overall assistance. “The entire paid staff has knocked themselves out to accommodate the transition,” the Chief’s report said.

Credit card receipt submission from staff has been excellent, with no issues. Paid staff lunches have been discontinued.

Crawford spoke at DOLA hearings for the Gaming Impact Grant. He noted that the department should hear in December if all or part of the grant was awarded. The grant has a 25 percent match.

27 SCBA’s (breathing apparatus), masks, and 54 bottles were delivered on September 26 pursuant to a FEMA/AFG grant.

Automated external defibrillator (AED) pads have been updated, and servicing on the older pads will occur shortly and placed in service. All trucks will have an AED by the end of October.

Crawford noted that funds from a UASI security grant for a trailer are expected “any day.” The grant has a $5,000 match, which TFPD needs to give up front.

Trucks will be outfitted and inventoried by January 1, 2015. They are currently 75 percent complete. Issues occurring with accessing the inventory system should be resolved by the end of October.

Locks have been replaced or security codes changed at all stations.

The Board went into executive session at 7:30 p.m. regarding contract negotiations with former Chief Jennings. The regular meeting reconvened at 8:10 p.m.

Discussions had begun with Gilpin Ambulance regarding utility costs at Station 2, where an ambulance is housed. Preparation of an Intergovernmental Agreement was suggested.

The Board reviewed a draft budget for 2015. As of October 15, the budget is available for public viewing on the TFPD website, timberlinefire.com, under the “Board of Directors” heading. The budget is also available for viewing at Station 3.

Projections are as follows:

Crawford noted that the department has paid for a detailed report on the valuation from the Gilpin Assessor. After trying for six months, TFPD is still not getting what has been asked for.

“It’s 12 million dollars over what they gave in the certification notice,” he commented. “I’m getting frustrated, to say the least.”

Expenditure increases from 2014 are budgeted for technology services, training, hiring costs, insurance, wages and payroll taxes, cleaning at Stations 3 and 7, and rent at Station 9.

A workshop will be held Tuesday, October 21, at 6:30 p.m. at Station 7, 14908 Highway 119, to receive input from firefighters on the direction of staffing in the department, to be followed by training.

The next regular meeting will be held Monday, November 10 at 7 p.m. at Station 3.

END_OF_DOCUMENT_TOKEN_TO_BE_REPLACED

Where the dead get to tell their story By Jaclyn Schrock On Saturday, August 21, the Gilpin Historical Society held their annual Cemetery Crawl. Tickets allowed the shuttle of hundreds of guests from the Teller House parking lot to the Cemetery. Depending on v... END_OF_DOCUMENT_TOKEN_TO_BE_REPLACED

Benefitting the county, schools, and much more By Don Ireland   This year marks the 30th anniversary of casinos opening in the former little mining towns of Black Hawk, Central City and Cripple Creek, Colorado. In those early years, smoking was allowed inside ... END_OF_DOCUMENT_TOKEN_TO_BE_REPLACED