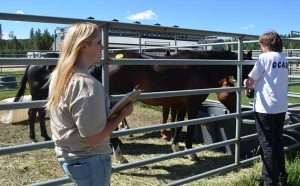 Gilpin County residents watched anxiously this week as firefighters desperately battled a blaze near the neighboring town of Nederland that started last Saturday, July 9, around 1:30 p.m. The fire started near Cold Springs Road and Peak to Peak Highway. No lives were lost, but the fire’s close proximity to residences made it the most dangerous of seven wildfires burning in Colorado this week.

By Monday evening, July 11, the fire had burned 606 acres, destroyed five homes and three outbuildings, forced the evacuation of nearly 2,000 people from their homes, and caused $2 million in damages. Nederland’s fire department, along with other local responders, fought the blaze. They were joined by hot shot crews from around the region, until the total force was around 500 strong. Two dozen planes dropped water from Barker Reservoir.

The five homes destroyed were located at 171 Bonanza Drive, 37 North Sky View Drive, 325 Sherwood Drive, 2315 Ridge Road, and 2454 Ridge Road. One of those homes belonged to Capt. Charlie Schmidtmann and his wife Bretlyn, both of whom are Nederland residents and serve on the town’s fire department, according to a report in the Boulder Daily Camera.

An online fund has been set up for victims by the Foothills United Way at ColdSpringsFireFund.org.

By Monday, July 11, the area’s 35-mph westerly gusts and low humidity made for a poor prognosis. However, the Boulder Sheriff’s Office reported that crews made good progress that day, and the fire did not grow as of Monday evening, despite the winds. The crews managed to get the fire down to 566 acres by Tuesday morning, although the fire was still at zero percent containment, according to a Denver Post report. Local weather forecasts predicted cooler temperatures, down to the 70’s for the Nederland area, lighter winds on Tuesday, and the possibility of thunderstorms for Thursday and Friday.

Wheeler summarized the details of TFPD’s assistance. The department helped on Saturday with nine firefighters and five apparatus. They worked until midnight on structure protection, when they were released to standby mode. TFPD firefighters worked extensively to check the area and to keep an eye on Highway 119, putting plans in place to fight the fire if it crossed Hwy 119 and to protect homes in TFPD’s district. As of Tuesday, four fully-staffed apparatus remained on 24/7 standby at district stations. At the same time, the department was busy fielding several calls on district emergencies unrelated to the Nederland fire.

The Gilpin Sheriff’s Office stood ready to assist if the fire came into Gilpin County or if Boulder County should need assistance, Wheeler said.

Effective Sunday, July 10, the Gilpin Sheriff’s Office instituted Stage 1 fire restrictions for Gilpin County. These include no building or using a campfire without a permit except in a developed camp or picnic ground and no smoking except in an enclosed vehicle or building.

The Gilpin County Fairgrounds opened to receive animals, and GCART housed ten horses and some goats on Saturday evening. They had about a dozen members performing animal rescue Saturday night and four or five trucks, then were placed on standby Sunday morning.

On Sunday afternoon, the fire “blew up,” said GCART leader Larry Sterling, and the team went into action again.

“We took in 123 animals,” GCART’s Vicki Nemec reported, including horses, chickens, ducks, geese, and a few cats and dogs. Wire crates stood ready in the fair barn, but most people kept their dogs and cats with them. On Monday evening, the team received five goats.

“This was the first real incident here and the first time to use our data base,” Nemec said. “It’s been a learning experience.” She issued a big thanks to all who helped, stating, “All we have needed has been provided – it just shows up!”

Sterling and the other GCART members were glad to help, but noted with disappointment that initially their team was overlooked by the Boulder responders.

“Boulder forgot us,” he said. “We are capable of taking more than 150 large animals, so when Boulder was told, they put us back on.” He added that radio station 103.5 FM (“the Fox”) mistakenly reported that Gilpin could only take small animals.

“It’s an issue when they don’t get the information right,” Sterling said. “That can kill people and animals. Of course, people are the first priority.”

GCART member Allie Nelson advised, “Up here in our community, animals are family.”

The Gilpin Community Center (GCC) was also open to assist evacuees, but no one availed themselves of that resource. GCC staff advised that they had not been designated as an official evacuation center. People could go in and use the showers or the GCC computer, which one person did. Had the GCC been designated as an official shelter, patrons would have been asked to leave and the Red Cross would have set up to receive evacuees.

Nearly 2,000 people were under mandatory evacuation orders by Monday evening. The evacuation area included Boulder Canyon west of Magnolia and Sugarloaf Roads, according to the Boulder Office of Emergency Management. Also included were both sides of Ridge Road and the east side of the Peak to Peak Highway. The affected subdivisions included Bonanza Mountain Estates, Cold Springs, Whispering Pines, St. Anton Highlands, and Silver Springs, 7NEWS reported. Nederland High School provided shelter, with enough room for 575 people, but the Red Cross advised that no one had used the shelter Saturday night. The shelter was to stay open as long as there was a possibility of evacuation.

The East Boulder Recreation Center in Boulder was also opened as an evacuation shelter, and the Boulder County Fairgrounds was also open to receive animals from nearby residents.

An investigation into the fire’s source led to the arrest of two men on Sunday, July 10. They were charged with not properly extinguishing a campfire they had made overnight Thursday into Friday near the Peak to Peak Highway and Cold Springs Road. The men, who appeared in court on Monday, are Jimmy Andrew Suggs, 28, and Zackary Ryan Kuykendall, 26, both of Vinemont, Alabama. The men face a fourth-degree felony arson charge because lives were endangered as a result of the fire, a 7NEWS report said. Suggs and Kuykendall, along with a friend, Elizabeth Burdeshaw, 20, were camping illegally on private property. Burdeshaw was not involved in building or extinguishing the campfire and will not be charged.

In addition to the Cold Springs fire, there are six other wildfires burning in Colorado as of the morning of Tuesday, July 12.

The Beaver Creek fire is burning north of Walden. The fire has burned 19,500 acres since it started on June 19 and has crossed into Wyoming. The cause is unknown. October 21 has been projected as a containment date.

The Hayden Pass fire has burned 12,000 acres near Coaldale in Fremont County, between Canon City and Salida. The fire was ignited by lightning on Friday, July 8, and was expected to reach the community of Coaldale by Tuesday, July 12, according to a report in the Denver Post.

The Fort Carson fire is burning on the training range located in the southwest area of Fort Carson. It is about 720 acres in size. The cause is under investigation. No people or homes are threatened at this time.

The LTE 4-Mile fire is burning eight miles southeast of Rangely, on the Western Slope. The fire has burned about 415 acres.

The Lodgepole fire is burning near Leadville at the base of Mount Elbert. The fire has burned about 34 acres, but is 100 percent contained.

The Spring Gulch Fire has burned 11 acres in the Pike National Forest, three miles south of Deckers, in Douglas County. No homes or buildings are at risk.