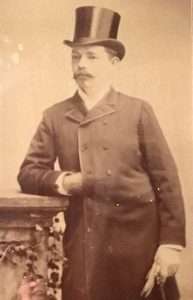 The Central City Opera House Roeschlaub designed was completed in 1878. The original structure had three large boilers in the basement, and used outhouses in the back, where there were tents for the entertainer’s dressing rooms. It was well received to enlarge the entertaining space from the overcrowded Belvidere Theatre back downhill on Main Street. The Central City Opera House was uphill on Eureka Street from the 150 room Teller House completed in July 1872. The Assay Office was between them, where precious mined minerals were verified as pure. Across the street in the Masonic Lodge upper floor is the original Weekly Register-Call office – the oldest weekly newspaper still printing in Colorado. Uphill from the Weekly Register-Call office is St. James United Methodist Church, still holding services since 1863. Uphill some more from the Methodist Church is the Gilpin County Court House that was completed in 1900. There are many historic buildings that neighbor the Opera House.

Two main rooms used for the tea had originally been used for the ladies social room and the adjacent men’s smoking room with solid, ornate nine-foot arching doors connecting them. Both rooms are also accessible from the central lounge. The second floor rooms of the Teller House are fully furnished as they had been when the Teller House was built. In the room the men had used, was a grand piano and a chandler still equipped as designed to make light from gas as well as electricity. Both rooms were furnished with large and small round tables with upholstered tall back chairs. On each table was fine china tea service and silverware, centered with fresh flowers on white linen table cloths.

Servers were Brenna Schembri of Gilpin County’s Historical Society, in historical serving attire, and Matthew Power who replaced Eric in property management in Boulder before he came to Central City. Matthew is nephew to five international sisters who also attended the tea. Dave Beightol was the chef who prepared the menu including: several teas, cream and sugars, finger sandwiches, fresh fruits and vegetables, traditional deviled eggs, and dainty desserts to include amazingly moist chocolate cake.

After many exquisitely performed classical pieces had enhanced conversations around and between tables, many cups of tea had been emptied. A variety of tasty sandwiches were presented on trays to each guest to select from along with the eggs and fresh fruit and vegetables, with repeated courtesies.

Our musician was able to join us at the table with some others from the Gilpin Historical Society and Opera Guild. Eric Chinn stood where all the tables could hear him and presented the story of Robert Roeschlaub.

Robert Roeschlaub was born 1843 in Munich, Germany, and with his parents settled in Quincy, Illinois. Robert was 16 years old when his father came out with the Colorado Gold Rush in 1859. As many who came seeking fortune, they soon returned home with tales of romance and hardship of Western pioneers. Robert’s father continued his medical practice, while Robert began working to engage in trades that developed his career.

Robert enlisted at the age of 19 in the Illinois Volunteers to serve in the Civil War. He quickly went from private to sergeant. In 1863 he was promoted to 2nd Lieutenant and again promoted to Captain of Company E after Robert E. Lee surrendered. He saw war through many battles in the western areas of the war, naming at least eight battles. He was wounded twice, and went home hoping to make light of the soldier’s experiences. He did later write about being a foot soldier 30 years after he re-read letters he had written home.

Once home Roeschlaub worked in a retail store, and eventually was able to become an apprentice with established architect, Robert Bunce. He developed his experience there for eight years. When Roeschlaub was capable of establishing his own architect business, he chose to go to Denver. Many of the buildings he designed kept the style of the times. As he was successful from Denver, to Central City, to Manitou Springs, Pueblo, Greeley, and even Wyoming he began making the inside uses, comforts and necessities a big influencer to his designs, along with the structure and style. In his later years, he did much work for the Denver Schools, both the University of Denver and public schools.

Eric was easy to listen to while relating of more details to his story. When finished, he presented Roeschlaub’s 3rd and 4th Great Granddaughters with gifts from Central City Opera House Association. They presented each woman with a copy of the book, The Glory That Was Gold, published by the Central City Opera House Association in 1992. Each page holds the name and story of persons who contributed in some way to the perpetuation of tradition and entertainment in the Opera House. Roeschlaub’s story is told on page 248, with 317 pages of stories in all. They also received the John Gregory key pendant to remember the one who made Central City possible.

Robert and Anna Roeschlaub had a daughter Grace Emmeline, who married George M. Sibley. Their oldest son, John Robert Sibley, is the 3rd generation from RS Roeschlaub, whose oldest daughter is Elisabeth Sibley Fumer who is the mother of Jennifer. In the photo at the tea with Eric Chinn presenting gifts, (on the left) is Kiera Elisabeth Vinson, Jennifer Elisabeth Fulmer Vinson with her oldest daughter.

The first two generations raised their families in Denver. Elisabeth Fulmer and her brother spent some time in Denver as young children, but moved with the family where they were raised in Franklin, PA. So the third generation moved east and the next two generations have stayed close to that area, interrupted by visits like this one to Colorado.

Other special guests at the tea included a sister’s reunion. The only children of the mother and father still enjoy each other’s company. They were thrilled to be invited by their nephew, Matthew Power, to celebrate time together. In the photo of the sisters in a bedroom on the 2nd floor of the Teller House, from left to right, they are in age order, with the oldest in her 70’s.

The Roeschlaub Tea at the Teller House was a memorable event to all who attended. Thank you, Central City Opera House! We look forward to enjoying the 2019 season.

END_OF_DOCUMENT_TOKEN_TO_BE_REPLACED

Benefitting the county, schools, and much more By Don Ireland   This year marks the 30th anniversary of casinos opening in the former little mining towns of Black Hawk, Central City and Cripple Creek, Colorado. In those early years, smoking was allowed inside ... END_OF_DOCUMENT_TOKEN_TO_BE_REPLACED

Where the dead get to tell their story By Jaclyn Schrock On Saturday, August 21, the Gilpin Historical Society held their annual Cemetery Crawl. Tickets allowed the shuttle of hundreds of guests from the Teller House parking lot to the Cemetery. Depending on v... END_OF_DOCUMENT_TOKEN_TO_BE_REPLACED