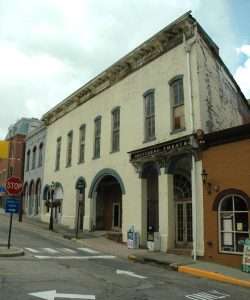 Gilpin County Board of County Commissioners met in Central City for their second meeting of the month on March 24, 2015. All Commissioners were in attendance.

Larry Krug, owner of PharmaStrategies, LLC and Tyler & Dylan Real Estate Co., LLC, is requesting a public/private partnership with Gilpin County in order to apply for a State Historical Fund grant. He would like to apply for the grant in order to restore the historic façade of the Roworth Block at 127 Main Street in Central City, but is ineligible acting as a for profit corporation. Krug is requesting that Gilpin County applies for the grant on his behalf and acts as an intermediary so that the estimated $250,000 restoration project can be completed with a cash match of at least 50%. County Planner Ray Rears indicates that to his knowledge, Gilpin County has never has never acted as a State Historical Fund grant intermediary. Commissioner Isenhart noted that she would feel more comfortable setting up a policy for this type of request since they would be setting a precedent. The commissioners noted they wish to maintain eligibility for state and county grants and they do not want to endanger any other county projects in the works. A policy will be created with the understanding that other grant requests will be considered within the context of other current and future projects within the county. Mr. Krug’s request was tabled until further notice until a policy is established in order to handle applications.

Alynn K. Hoffman reported that the Public Trustee’s office is down in anticipated income for both 4th Quarter 2014 and all of 2014. This office is strictly run by fees and costs that are collected. Based on current figures, Hoffman indicates that it is very possible she will not be taking a salary by the end of the year. In the fourth quarter, there were $24,393.84 in fees, costs and interest that came in. Funds from the reserve account had to be used to pay $5039.04 in salary expenses. The amount of funds taken from the reserve account to cover this was $649.10, leaving $17,336.04 in this account.  Hoffman continued to comment on the 2014 year report, where the Reserve Account came in $3823.96 below budget. Due to the reduction in collected fees, there will be no money going to the county commissioners for the Reserve account. 2014 fees were significantly below pre-recession numbers with only 20 foreclosures last year. The releases have gone down from 535 in 2013 to 355 in 2014. Total income for 2014 was $84,648.18 with disbursements at $96,909.72. For 2015, the first foreclosure was just received the week of the March 17th.

County Manager Roger Baker indicated that there is a need for the county to take possession of the Belvidere Theatre in Central City, which is anticipated to take until early June in order to be able to take title. This particular action is a first for many things; being Trustee Hoffman’s first time titling a property over to the county and Baker indicates that the County’s general goal is to get rid of property, not to acquire it. The Board of Commissioners approved submitting the appropriate forms to the Treasurer in order to get this process moving forward. The Treasurer currently holds a Treasurer’s Tax Sale Certificate issued pursuant to the tax lien sale held on November 19, 2008, for the taxes and special assessments for the year 2007.

Water Rights Lease between Gilpin County (lessor) and Gary Gambino (lessee) was approved for “Gilpin’s Four Inches” of Church Ditch water rights. These rights are not needed by Gilpin County for 2015 and Gambino owns property under Church Ditch, address 11950 W. 76th Ave., Arvada, CO 80005, with a need for irrigation water. The commissioners commented that it is in their best interest to make sure the water is being used, even though this lease is a very small amount of money ($540). Commissioner Buddy Schmalz noted that you can often buy water a lot cheaper than you can get the water rights for it.

Sergeant Steven Watson helped to present an agreement for Cooperative Wildfire Protection to the Commissioners. Baker described the agreement as a sort of insurance for counties. This cooperative agreement is throughout the state and allows guidelines for the state to help pay for wildfire disasters. It designates the lead Colorado agency for wildland fire suppression as identified in the Colorado State emergency operations plan. This agreement is important because it outlines duties between the State, County and Sheriff. All Colorado counties pay into a fund for wildfire disasters which are paid out as first-come, first-serve. There is always a concern that these funds could run out before Gilpin County needs it, but there are no other options for this type of agreement. No counties have opted out of the agreement, although many have threatened to make changes. Gilpin County pays in a very small amount for the agreement, which is already in the budget. The agreement was approved by the Commissioners.

Roger Baker presented the County Manager report by referencing a letter of support, signed by Commissioner Chair Buddy Schmalz, for a state historical grant for the Central City Opera House Association that is applying to get funds from the State Historical Fund for restoration of the Teller House. He also advised them about information in the Forest Service’s most recent draft Record of Decision (ROD) released in regards to the Eldora Ski Area expansion. In the most recent draft ROD, it was noted that the proposed expansion includes a section of lifts coming into Gilpin County. The property is thought to be owned by the Tolls, but this needs to be verified. Lastly it was noted that Todd Kumro, Gilpin County’s current Veterans Services Officer, has resigned from his position effective in April.

The Commissioners discussed possible short term solutions for a county Veteran Services Officer, like hiring for a temporary appointment that could later be made permanent. Isenhart recommends they speak with surrounding counties to see if a possible multi-county approach could be another feasible alternative. They discussed the other possible organizations or groups they would like to try to meet with this year. One of which is the I70 Coalition meetings where it was decided that County Manager Baker will attend as part of the public. At this time Gilpin County will most likely not be pursuing membership into the coalition that comes with voting rights. Currently this coalition spends a lot of time on the tunnel expansion projects and the county would like to stay informed as to what they are working on.

Gilpin county resident Patricia Eaton voiced her opinion about the proposed Rollins Pass Road project as well as the Marijuana ordinance during the Public Comments section of the meeting. In regards to the Rollins Pass Road project, she wanted to let the Commissioners know that she would not like to see this road opened. If the project was to be approved, the road would run between two wilderness areas and she believes the extra traffic would affect wildlife and these wilderness areas. She noted that not a lot of people understand the time and energy that goes into these hard-fought-for wilderness areas. The extra traffic and noise of four wheelers in this area would also cause more pollution. Eaton urged the Commissioners to visit the wildlife area before making any decisions. She also wanted to comment on the Marijuana ordinance. This issue has been tabled by the Commissioners until the ordinance is reviewed and handled by the State of Colorado. Eaton is concerned about the search aspect and feels that constitutionally it could be a violation of rights if a law enforcement officer smells marijuana and is provided the right to search the vehicle without a warrant.

The meeting ending with the approval of the meeting minutes for March 18, 2015.

END_OF_DOCUMENT_TOKEN_TO_BE_REPLACED

Benefitting the county, schools, and much more By Don Ireland   This year marks the 30th anniversary of casinos opening in the former little mining towns of Black Hawk, Central City and Cripple Creek, Colorado. In those early years, smoking was allowed inside ... END_OF_DOCUMENT_TOKEN_TO_BE_REPLACED

Where the dead get to tell their story By Jaclyn Schrock On Saturday, August 21, the Gilpin Historical Society held their annual Cemetery Crawl. Tickets allowed the shuttle of hundreds of guests from the Teller House parking lot to the Cemetery. Depending on v... END_OF_DOCUMENT_TOKEN_TO_BE_REPLACED