Taxes and appointments on the ballot for Central City 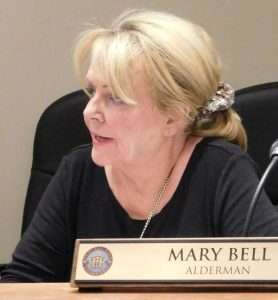 Voorhies led the Pledge of Allegiance and then asked for any amendments or additions to the evening’s agenda. There were no additions or amendments to the agenda.

Voorhies asked if there were any conflicts of interest for any member of the council. There were no conflicts expressed.

The Mayor pro-tem called for a motion to approve the consent agenda which consisted of the minutes from the August 21 meeting and regular bill lists through August 27. Alderwoman Bell asked for clarification on two items; a payment to GCAA, and a payment to Reliant Construction. Explanation was that the GCAA payment is to pay for art sales in the Visitor’s Center, and the Reliant payment is for the bubble building that is being constructed to house fire department apparatus. Alderwoman Laratta moved to approve the Consent Agenda and was seconded by Alderman Aiken and Alderwoman Bell simultaneously. The motion passed unanimously.

Mayor pro-tem Voorhies opened the floor to the public for anyone who wished to speak to a topic on that night’s agenda. No one chose to speak to the Council at this time.

Sales and Use Tax Increase on the Ballot

Manager Miera introduced Resolution 18-22 which would add a ballot measure to the November 6, 2018 ballot regarding increasing the local sales and use tax from four-percent to six-percent to fund fire protection and public safety services, programs, and facilities. Several work sessions have been held discussing the needs of the fire department and its aging assets.

Alderwoman Bell asked about tax relief for residents purchasing large tickets items; specifically, vehicles. Manager Miera replied that there are no provisions for a rebate for vehicle purchases and referred the question to City Attorney McAskin. Attorney McAskin replied that he was not able to answer the question in full at that time, but is not aware that there are exceptions made in tax measures for other entities. McAskin added that after the measure is put to the voters, an amendment can be considered.

Alderman Aiken moved to approve Resolution 18-22 and was seconded by Mayor pro-tem Voorhies. The Resolution passed three to one with Alderwoman Bell voting against.

Appointment Option on the Ballot

City Attorney McAskin reviewed Resolution 18-23 which would add a ballot measure to the November 6, 2108 ballot regarding approval of an optional method to fill vacancies on the Central City Council when vacated more than 180 days prior to the end of a term. The current charter rule requires a special election which costs the City between two to three thousand dollars. Should the ballot measure pass, the Council will have the option to appoint, by majority vote, a person to the position to serve the remainder of the term. The position of Mayor is excluded from the option. If the vacancy occurs less than 180 days from the end of a term, the Council currently has an option to appoint a qualified replacement.

Alderman Aiken moved to approve Resolution 18-23 and was seconded by Alderwoman Laratta. The Resolution passed unanimously.

City Clerk Bechtel introduced Resolution 18-23 which would call for a special election to be held on Tuesday, December 11, 2018, to elect a Councilperson to serve the remaining term for the seat vacated by Alderwoman Bell. Alderwoman Mary Bell submitted her resignation, to be effective after the next regular council meeting of September 18, stating that due to health reasons, she has found it necessary to step down from her seat, sell her shop, and leave Central City.

Attorney McAskin introduced the first reading of Ordinance 18-11 which would approve a license fee rebate agreement with 321 Gregory Street LLC and Gregory Gaming LLC (Grand Z Casino owner and operator). The rebate would help offset the cost of constructing a surface-level parking lot in Gregory Gulch. The parking structure, requiring storm water infrastructure and clean fill, would be immediately east of the Century Casino parking garage and would include sidewalk, gutter, and curb improvements. Alderman Aiken called this “A win-win situation.”

Alderman Aiken moved to approve Ordinance 18-11 and set the second reading and public hearing for Tuesday, September 18, and was seconded by Alderwoman Bell. The motion passed unanimously.

Opera board member Eric Chin was present and stated that the board is hesitant about the arrangement as they have not done something like this in a long time; however, “this will go a long way” toward convincing the board to move forward, stated Chin.

Alderwoman Laratta commented, “It’s been a great summer, I think, we got a lot done.”

Mayor pro-tem Voorhies opened the floor to the public for anyone who wished to speak to the council on any items not on the agenda. No one chose to address the Council at that time.

Voorhies adjourned the regular meeting at 8:08 p.m. The next regular Council Meeting will be Tuesday, September 18, 2018.

END_OF_DOCUMENT_TOKEN_TO_BE_REPLACED

Where the dead get to tell their story By Jaclyn Schrock On Saturday, August 21, the Gilpin Historical Society held their annual Cemetery Crawl. Tickets allowed the shuttle of hundreds of guests from the Teller House parking lot to the Cemetery. Depending on v... END_OF_DOCUMENT_TOKEN_TO_BE_REPLACED