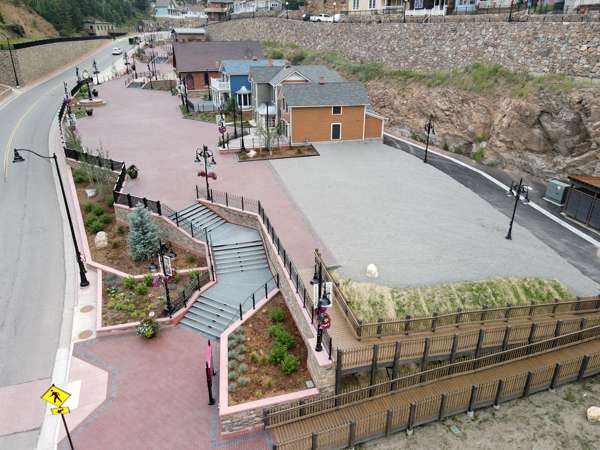 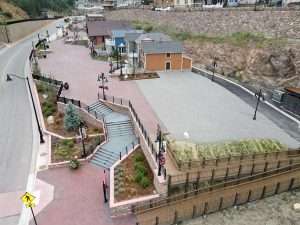 New park benches for Gregory Plaza and other city locations

Dozens of new park benches will be coming to Gregory Plaza and other locations around Black Hawk in the near future. Black Hawk City Council approved spending $60,617 with Treetop Products to purchase 35 black benches, 10 covered trash containers and a round picnic table with seats at last week’s council session. The new customized, plastic-coated benches will feature the Black Hawk name and logo.

The picnic table, some of the new benches and waste containers will be placed in the new Gregory Plaza Historic Appreciation Recreation District (HARD) along Gregory Street between the Stroehle Square and Gregory Point. It is anticipated the new benches will be in place before next spring’s ribbon-cutting ceremony and related grand opening celebration for Gregory Plaza, which pays tribute to Black Hawk’s founding and early history as a gold-mining community.

“The new benches will make the theme consistent in the HARD district and other areas,” according to Mayor David Spellman.

Mayor Spellman previously estimated the Lake Gulch Whiskey Resort may attract 60,000 visitors a year, while the other parts of the renaissance program could attract thousands more annually. In recent, pre-pandemic years, up to 20,000 visitors a day came to Black Hawk’s casino district, which the city calls the GOLD (Gaming, Outstanding Lodging and Dining) District.

Council appointed Judge Robert Mack to serve as a City of Black Hawk Associate Municipal Court Judge. He was recommended to the court bench position by Judge Ron Carlson, the primary judge for the city. Judge Mack can be a counterpart for Associate Judge Thad Renaud.

There will be no additional costs to Black Hawk for the new judge. Judge Carlson said he and Judge Renaud sometimes have schedule conflicts, so approving another associate judge will help resolve potential issues.

Mayor Spellman and city aldermen welcomed Alicia Marotti back to the city as a communications officer for the Black Hawk Police Department. From 2011 to 2018, Ms. Marotti spent one year as an evidence and property technician for the department and also was employed for six years as a communications officer. She left the city employment three years ago but decided to return. “I’m glad to be back,” she told audience members at the meeting.

Ms. Marotti’s reintroduction to the city last week included being asked to ring the church bell, which occurs to start each Black Hawk Council meeting. The bell is part of the historic, former Presbyterian Church building that is now home the city council chambers.

Previously, someone could obtain a 72-hour permit allowing a recreation vehicle to be parked in a residential area. Before the permit expired, that owner could get another 72-hour permit, then another and repeat the process. As a result, obtaining repeated permits meant the vehicle could park for extended periods of time – an action that resulted in neighborhood complaints. 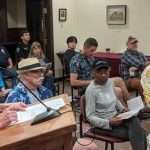 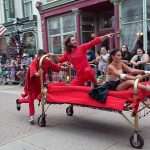