Taj Mahal – the blues is alright 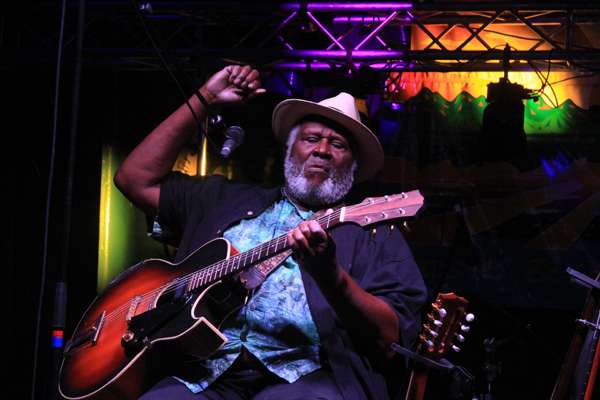 “She Caught The Katy (And Left Me a Mule To Ride)” is one of two-time Grammy Award winning blues artist Taj Mahal’s most popular songs. First recorded in 1968 on his album The Natch’l Blues, “Katy” refers to the Missouri-Kansas-Texas Railroad. His woman may have left on a train, but Taj has since traded-in the mule for a luxury tour bus that he travels the country with.

Credited with combining influences from the South Pacific, Africa, and the Caribbean in his music, Taj Mahal’s roots are firmly planted in the blues. Surely a national treasure, his playing style, whimsical songwriting, upbeat recordings, and longevity set him apart from the others. The lyrics “Champagne don’t drive me crazy, Cocaine don’t make me lazy, Ain’t nobody’s business but my own”, is a casual approach to alcohol and drug use set to a bouncy rhythm. Performed Saturday night at NedFest, “Fishin’ Blues” didn’t give anyone the blues, but rather celebrated the exhilaration of going fishing and satisfaction realized when frying the caught catfish in a pan.

The two hours spent in Taj’s company seemed over in an instant. At the conclusion of his last number, the fully entertained audience showed their appreciation by continuously clapping for five minutes until he was obliged to give them more. The lively encore “The Blues is Alright” featured call and response singing that got everyone into the act and even included a few John Lee Hooker’s A-haw-haw-haws thrown in for good measure. At the end, everybody in attendance agreed that “the blues is alright.”

END_OF_DOCUMENT_TOKEN_TO_BE_REPLACED

Benefitting the county, schools, and much more By Don Ireland   This year marks the 30th anniversary of casinos opening in the former little mining towns of Black Hawk, Central City and Cripple Creek, Colorado. In those early years, smoking was allowed inside ... END_OF_DOCUMENT_TOKEN_TO_BE_REPLACED