Published 9 years ago Wes Isenhart9y ago 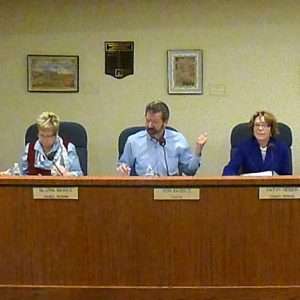 In the first Central City Council meeting of 2013, the council said goodbye to outgoing members Rita Lee and Bob Giancola and welcomed as new members Gloria Gaines and Kathy Heider. The first meeting of the year featured a number of yearly appointments as well as the first reading of two ordinances regarding the regulation of marijuana cultivation for personal use in personal residences and the purchase of a new truck for the Water Department. Council also approved an Intergovernmental Agreement with Douglas County Commissioners for access to a metro-wide sex offender registration system called SOTAR. Mayor Ron Engels presided over the meeting with all old and new council members present along with all department heads and legal counsel.

The meeting started with two ceremonies. The first ceremony was a recognition and appreciation for the service and contributions of the two outgoing council members Bob Giancola who served on the council for five years and Rita Lee who served for a year. Mayor Engels presented both with plaques of appreciation and both expressed in their final remarks an appreciation for the opportunity to serve as council members and highlighted some of the accomplishments that occurred during their terms. The second ceremony was the swearing in of the two new council members Kathy Heider and Gloria Gaines who took the oath for the office of Alderman that was administered by Municipal Judge David Goss and then took their seats on the council.

Annual appointments were the first item of business by the new council and were all approved unanimously. These annual appointments included Bob Spain as the Mayor Pro-tem, the Weekly Register-Call as the legal publication for 2013, Ron Engels as the DRCOG Representative and the appointment of city manager Alan Lanning to be the Gilpin Ambulance Authority Representative with Finance Director Shannon Flowers as the alternate.

The first ordinance of 2013 (13-01) which was unanimously approved on first reading concerned the posting of notices for regular and special meetings in public places. Ordinance 13-01 amends the Municipal Code to establish posting procedures and the public places designated for posting of meetings. In conjunction with Ordinance 13-01 was Resolution 13-01 which designated the two posting locations to be the Post Office and the front door of City Hall so as to be visible 24 hours a day. Washington Hall was removed as a posting location.  Resolution 13-01 was approved unanimously.

Ordinance 13-03 amends zoning regulations that the City Council previously adopted concerning residential cultivation of medical marijuana to expand the limitations on the number and location of plants in a residence. The new zoning ordinances prohibit marijuana from being grown outside in a garden, in separate structures like a garage and not displayed in visible areas like the front window of a house. Marijuana plants will be limited to six per individual with no more than twelve plants per residence if there are multiple adults in a residence. Councilwoman Gaines inquired about rentals and townhomes. Attorney Michow said that the renters would be subject to the terms of their rental agreement and attached properties would be regulated so that there would be no cultivation in the common areas of a multi-family or attached residential building. Due to the scheduled absence of legal counsel at the next meeting, the public hearings on Ordinances 13-02 and 13-03 will be opened at the February 5th meeting and then continued to the February 19th for a final vote. These two ordinances only regulate the cultivation and possession of marijuana for personal use. Council will have to determine before July 1st whether they will license retail pot shops in the business district or impose a moratorium on them like they did with the casinos.

Chief of Police Terry Krelle presented Resolution 13-02 to council regarding the approval of an Intergovernmental Agreement (IGA) with the Douglas County Commissioners for access to a sex offender registration system called SOTAR. Central City currently does not have a publicly searchable database to enter registered sex offenders. At any given time Central City has 1-8 registered sex offenders in residence in the city.  Thirty two law enforcement agencies that contribute to the SOTAR database and DouglasCounty require an IGA from each agency that participates. Motion to approve Resolution 13-02 carried unanimously.

During staff updates, Finance Directory Flowers told council that the first metered water bills went out in January. There was a billing mistake charging seniors and a two dollar credit will show up on their bills in February.

The two new council members took the opportunity during council comments to thank those who supported them in the election. Mayor Engels extended his welcome to the new members and said that he was looking forward to working with them. Councilwoman Voorhis reported that there had been a few complaints regarding how the roads had been plowed during the last snow storm.

The next meeting of the Central City Council will be on February 5th at 7 p.m.

END_OF_DOCUMENT_TOKEN_TO_BE_REPLACED

ShareTweetShare on Google+Pin on PinterestSend with WhatsApp
» Your mobile ad here!
8 recommended

END_OF_DOCUMENT_TOKEN_TO_BE_REPLACED

Benefitting the county, schools, and much more By Don Ireland   This year marks the 30th anniversary of casinos opening in the former little mining towns of Black Hawk, Central City and Cripple Creek, Colorado. In those early years, smoking was allowed inside ... END_OF_DOCUMENT_TOKEN_TO_BE_REPLACED