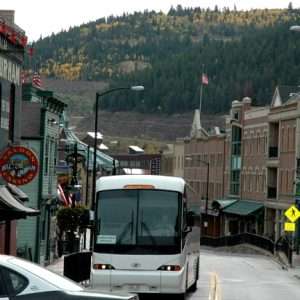 Gregory Street back on two-wheeling route

Bicyclists riding between Black Hawk and Central City can again sidle up to tour buses, shuttle buses, gaming and local traffic on a .4 mile stretch of Gregory Street that they’ve been banned from riding since 2010. Last week the Colorado Supreme Court overturned both the trial and district court rulings which had upheld the ban, and ruled instead that Black Hawk’s ordinance enacting the ban violated state law. Justice Gregory Hobbs, in delivering the opinion of the court, wrote that state law pre-empted Black Hawk’s municipal law because the municipal ordinance conflicted with specific statutory provision (Colorado Revised Statute 42-4-109 (11) ) “in a matter of mixed state and local concern.” The court found that Black Hawk could not ban bicycles from Gregory Street as it is the only route connecting Central City to Highway 119 and from there to other destinations such as Nederland. Further, Black Hawk was in violation of state law because no alternate route for the cyclists was provided within 450 feet of the banned route, as is required by statute. Because the matter went beyond local impact, the court also found that Black Hawk’s authority as a home-rule city did not apply.

For Black Hawk officials, the matter came down to one of safety and local authority. In 2009, acting on their authority as a home-rule city, the city council passed an ordinance authorizing them to ban bicycles, as well as other on-motorized vehicles, from any city street if it was found their use on those streets was incompatible with safety and the normal movement of traffic. City officials determined that streets in the commercial areas of Black Hawk, Gregory Street being the one with the most impact, were not suited to bicycle traffic because of narrowness and the heavy commercial use of these streets by large buses and delivery trucks. The .4 mile stretch of Gregory Street posted “No Bicycles” is a two-lane road with no room for shoulders. The incompatibility of simultaneous bicycle and commercial traffic was supported by an engineering and traffic study. Black Hawk’s ban, enacted in 2010, forced bicyclists to dismount and walk that stretch along the city’s sidewalks. That year, several cyclists chose to ignore the law and were ticketed by Black Hawk police. Three of them, Jamie Webb, Jeffrey Hermanson, and Michaleen Jeronimus fought the charges, unsuccessfully, through municipal court. They appealed to the district court, again unsuccessfully. These lower courts recognized the engineering and traffic study as a rational basis to promulgate the bicycle ban, and both courts determined that Black Hawk had the authority as a home-rule city to enact it. Then, with pro-bono legal counseling and support provided by Bicycle Colorado, a cycling advocacy group, the ticketed parties took their appeal to the Colorado Supreme Court.

The Colorado Supreme Court takes up a limited number of cases, hearing only one in fourteen cases, according to their website. The seven justices took up this case, Webb v. Black Hawk, in August, 2011 and then heard oral arguments from each party’s attorneys on November 8, 2011. Each attorney was allotted 30 minutes to make his case. The recording of those arguments show Justice Hobbs repeatedly interrupting Black Hawk attorney, Corey Hoffmann, while the opposing attorney, Paul Schwartz makes his argument smoothly. At one point, Hobbs appeared to make Schwartz’s argument for him, saying Black Hawk was making their decision to ban bicycles based on economic reasons rather than safety and topography. As the court routinely takes one to nine months to announce a decision, Black Hawk had not anticipated the ruling for several more months. David Spellman, mayor of Black Hawk, said it seemed to be an emotional ruling. Meanwhile, Bicycle Colorado claimed victory. Hobbs had written “Bicycling has long been a favorite recreational pastime of Colorado residents…” and cited several cycling events held in the state. Noting that “Bicycling is also a popular method of transportation,” Hobbs went on to say that cities in Colorado “have worked hard to accommodate and promote bicycle commuting,” and that bicycling as a mode of transportation is strongly endorsed by the Colorado General Assembly and that statute requires transportation planning to accommodate the needs of bicyclists. Bicycles are included within the state’s definition of “vehicle” and are subject to the same traffic regulations as automobiles. As such the cyclist is also subject to all the duties and penalties applicable to drivers of other vehicles.

When the Supreme Court overturned the ruling of the lower courts, upholding Black Hawk’s ban, the decision was watched not only by bicyclist advocacy groups, but also by numerous other municipalities and governmental agencies throughout Colorado and beyond. Conflicts between drivers of motorized vehicles and bicyclists have been recorded in the mainstream media on a more heightened basis in the past year. Other governmental officials, including Gilpin and Jefferson County commissioners, have heard complaints and considered solutions specifically when dealing with bicyclists on narrow two-lane mountain highways. Cycling advocates were also aware of the controversy. At the time Black Hawk initiated its ban, Bicycle Colorado members expressed concerns that Black Hawk’s ban would set precedent; similar bans could spread to other cities with the undesirable result of further restricting their riding access. That fear was not ungrounded. In 2010, Black Hawk’s city manager reported he’d been contacted by officials of other municipalities asking how to do the same thing (bicycle bans) in their cities. These cities had adopted a “wait and see” attitude, said then Black Hawk City Manager Mike Copp, postponing enacting their own bans to see if Black Hawk’s would be challenged.

Mayor Spellman said Black Hawk is now taking a look at options, but has no plans to build an alternative bicycle route. The confines of Gregory Gulch, with steep canyon walls and a creek flowing through the flume beneath the street, would make it difficult and expensive to widen the .4 mile stretch of Gregory Street at the center of the ban. The geography is also not conducive to creating a bike path within the 450 feet required by law. “Black Hawk has absolutely no plans to make any special accommodations for bicycles,” Spellman said, following the Supreme Court’s announcement. The court’s ruling determined the limits of Black Hawk’s municipal authority, but did nothing to insure the safety of those traveling Gregory Gulch.

END_OF_DOCUMENT_TOKEN_TO_BE_REPLACED

Where the dead get to tell their story By Jaclyn Schrock On Saturday, August 21, the Gilpin Historical Society held their annual Cemetery Crawl. Tickets allowed the shuttle of hundreds of guests from the Teller House parking lot to the Cemetery. Depending on v... END_OF_DOCUMENT_TOKEN_TO_BE_REPLACED

Where the dead get to tell their story By Jaclyn Schrock On Saturday, August 21, the Gilpin Historical Society held their annual Cemetery Crawl. Tickets allowed the shuttle of hundreds of guests from the Teller House parking lot to the Cemetery. Depending on v... END_OF_DOCUMENT_TOKEN_TO_BE_REPLACED