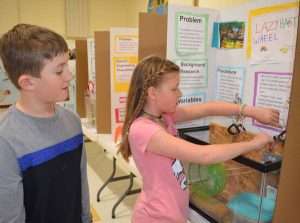 Gilpin County Elementary School’s multi-purpose room was filled with 80 original, creative STEM Fair projects on Tuesday, December 18. STEM is an acronym for Science, Technology, Engineering, and Math. Students in kindergarten through fifth grade in the traditional and Montessori classes participated.

The goal of the STEM Fair was to help these elementary-aged children begin developing skills necessary for college, career, and life readiness and to give them the opportunity to use science knowledge and skills just as real scientists, mathematicians, and engineers do.

The Fair was held during school hours. Parents were welcome to view before and directly after school on the 18th, as well as during the school day. All of the classrooms did a walk-through to observe and learn from the other experiments.

Bea Hanson won first prize for fourth grade and was the overall winner. Her problem? “My hamster, Elvis, sometimes doesn’t want to run on his hamster wheel. He doesn’t get as much exercise as he should.” She solved the problem by making a device that ran on its own, so when she set little Elvis down in it, he had no choice but to run.

Other first place winners were fifth-grader Ben Bushey, who built a hydraulic robotic arm; third-grader Ellianah Raynes, who learned that vegetables could be regrown from roots; second-grader Amelia Bushey for “fruit vs. vegetable electricity;” first-grader Norah Manley for her experiment on mixing oil and vinegar; and kindergartner Canyon Carlson for his homegrown crystals. All winners are listed at the end of this article.

The projects showed what students were curious about and what problems they wanted to solve. One student wondered what social media does to the brain. Another brought the real tooth of an extinct species of shark known as a megalodon tooth, and his twin brother made a replica of a T-Rex tooth. (Perhaps a future in dentistry awaits them!) One fourth grader made a “creation station,” and another built a sturdy wooden bike ramp because his dog had destroyed a dirt ramp.

Some students apparently like food that does more than just sit on the plate, as evidenced by the “dancing spaghetti” experiment. The pasta moved due to the chemical action of vinegar and baking soda. Unfortunately, it was also “exploding spaghetti,” necessitating a bit of kitchen clean-up. Another used club soda to get “dancing raisins,” although by his own admission he hated raisins.

Insect hotels were devised to see which of two containers bugs would prefer. However, no insects were attracted during the month of December, even though the young inventor tried to entice them with food. He thought he might try his experiment again in the summer.

Several students were intent on saving time and work for themselves because, as they claimed, they were lazy or clumsy or “too young to cook.” There was the pencil that would do homework, drones or robots that would deliver food, a pepper passer on wheels, and several room-cleaning robots.

This reporter’s personal favorite was the “Thinker’s Cap.” The student’s problem was, “I have a hard time getting out onto paper what I’m thinking. This cap knows what you’re thinking and it makes you write it,” he said. (I must get him to make me one.) You just need brain electrodes, a baseball cap, and a couple other things. If he could change anything, he said, he would use real electrodes.

A clever and possibly injurious project was the “Double Locker Shocker” that will protect you from invasion of privacy in the bathroom. The strategy was to shock the person trying to get in. Hopefully no real electrodes were used to test this one.

The chairs of the Fair were teachers Suzanne Diekman and Susan Sepanik. Eight judges reviewed the projects and selected the winners from those receiving the highest average score per grade level. Each project was judged by two to three judges, Diekman reported.

Only the third and fourth graders were required to do investigations and completed theirs in class. Participation for the other students was voluntary, but they had to do theirs at home. Most of the students began working on their tasks a couple of months ago. In keeping with aligning the assignments with their curriculum, third graders did a unit on scientific method, and fourth graders studied engineering design.

The school provided books and other resources for the students’ use. Each teacher received a STEM planning book to share with their students. The children also did research using dictionaries, Wikipedia, Youtube, various websites, people they knew, even museum paleontologists. Some made preliminary sketches or prototypes, making revisions as needed.

The judges were Chris Perez, Scott Murphy, Erin Trumble, Hannah Raynes, Ryan Raynes, Jim Larson, Jennifer Ferrante, and Kayla Carlson. They considered several criteria as they evaluated the scientific method or engineering process used in the experiments. Was the student’s question specific, or did they state a problem they were going to solve? What did the student predict would happen? Was the procedure explained and were the materials listed? Was the data analyzed? Did their solution solve the problem?

The projects needed to be visually appealing and creative, neat and well organized. Finally – and this was often a determining factor – was the student able to explain their project well and demonstrate that they understood the scientific method?

Results did not have to match predictions. Often the best way to learn is to discover how NOT to do something.

Judges commented on their reasons for volunteering at the STEM Fair. “It’s fun to see the kids learn. They are so excited and proud.” “I like seeing what the kids’ passions are.” “It’s great to see the kids develop over the years.”