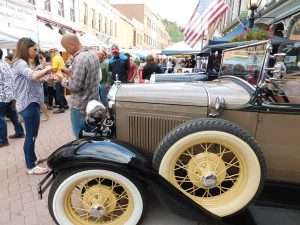 Gilpin County Isn’t the Only Thing Aging Around Here…

The fifth annual Stills in the Hills event rocked Central City on Saturday, June 24, 2017, drawing large crowds of thirsty folks looking to sample alcoholic indulgences. It was a partially sunny day that unusually stayed rain-free, although a cool breeze chilled some without sleeves, making perfect weather to hang out with friends while sipping locally distilled spirits from 29 distilleries. This event, spearheaded by the Business Improvement District and now in conjunction with Main Street Central City, has been gaining popularity over the years and is now in ticket-sale competition with similar events across the state. Inspired by the popularity of craft brewing, craft distilling was the natural next step as the public continues to thirst for uniquely crafted local products. Since craft distilling is perched to become as popular as craft brewing, it is important to know the difference between the various spirits.

Distilling boils down to changing the physical property of a liquid into a gas or vapor, and then back into liquid form. Brewing, by contrast, allows the fermentation of plant sugars to change the chemical properties of the liquids. Both methods use some sort of fermentation, but distilled liquids are typically aged much longer in containers that help flavor the contents.

The following is a list of common distilled beverages and their core ingredients. Vodka – rye and wheat or potatoes. Gin – malt flavored with juniper berries. Whiskey – barley or rye. Bourbon – malt, rye and at least 51 percent corn. Rum – molasses aged in oak barrels. Absinthe – flowers, leaves of wormwood, and anise or fennel. Moonshine – usually whiskey or rum made in secret and having high alcoholic content. Brandy – distillation of wine or fruit juice. Liqueur – any distilled spirit that is also flavored with sugary foods such as fruits.

Craft distillers may start with the basics mentioned above, but they are in the game because of a passion to create a drink uniquely different while maintaining high quality. Some of the more unusual products used among the distillers at this year’s event are ginger, kolsch beer, cilantro, coffee beans, bacon fat, bacon without the fat, cardamom, quinoa, violet petals, Szechuan peppercorns, elderberries, rhubarb, pumpkins, and genepi flowers.

Central City has several other summer events to look forward to including the Beat the Heat Wing Fest on July 22, the Great Central City Beer Fest following the 29th Annual Cemetery Crawl on August 26, and the Hot Rod Hill Climb on the weekend of September 15.

END_OF_DOCUMENT_TOKEN_TO_BE_REPLACED

Benefitting the county, schools, and much more By Don Ireland   This year marks the 30th anniversary of casinos opening in the former little mining towns of Black Hawk, Central City and Cripple Creek, Colorado. In those early years, smoking was allowed inside ... END_OF_DOCUMENT_TOKEN_TO_BE_REPLACED

Where the dead get to tell their story By Jaclyn Schrock On Saturday, August 21, the Gilpin Historical Society held their annual Cemetery Crawl. Tickets allowed the shuttle of hundreds of guests from the Teller House parking lot to the Cemetery. Depending on v... END_OF_DOCUMENT_TOKEN_TO_BE_REPLACED