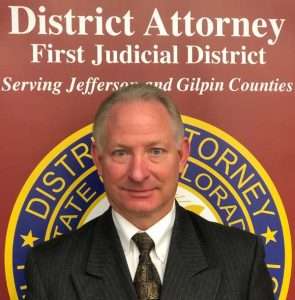 PRESS RELEASE – Chief Deputy District Attorney Steve Jensen announced on Saturday, February 2nd, that he is a candidate for District Attorney in the First Judicial District, which covers Jefferson and Gilpin Counties. He has been a prosecutor for 33 years, with the last 31 years in the First Judicial District. He has handled many of Jefferson and Gilpin Counties most significant cases, including the prosecution of the cases related to the Columbine HS massacre, the Deer Creek Middle School shooting, the cases related to the “rebirthing” suffocation of ten-year-old Candace Newmaker, the cases related to the burglary and murder of 82-year-old paleontologist Charles Repenning, and numerous other cases involving protection of children and the schools.

As a Chief Deputy District Attorney for the First Judicial District, he currently supervises the District Court and Gilpin County. He has previously supervised the County Court, Intake, Juvenile, and the Crimes Against Children units. The motto of his campaign is: “Protecting our community through the pursuit of Justice.”  During his announcement speech he said that he has dedicated nearly his entire professional career to breathing life into the US Constitution’s promise to “establish Justice.”

Chief Deputy District Attorney reviews and files all felony cases that occur in Gilpin County. He has successfully prosecuted three homicide cases in Gilpin County: Shawn Childs (1998) (life in prison); Collen Loris (2014) (32 years prison); Jeffrey Maynard (2018) (44 years prison). He also successfully prosecuted Randy Keesee (2011) (224 years prison) who committed the aggravated robbery of the Famous Bonanza Casino in Central City, getting away with some $10,000 in cash before he was apprehend, and who attempted to shoot Sgt. Ken Lloyd of the Black Hawk PD.

END_OF_DOCUMENT_TOKEN_TO_BE_REPLACED

Benefitting the county, schools, and much more By Don Ireland   This year marks the 30th anniversary of casinos opening in the former little mining towns of Black Hawk, Central City and Cripple Creek, Colorado. In those early years, smoking was allowed inside ... END_OF_DOCUMENT_TOKEN_TO_BE_REPLACED

Where the dead get to tell their story By Jaclyn Schrock On Saturday, August 21, the Gilpin Historical Society held their annual Cemetery Crawl. Tickets allowed the shuttle of hundreds of guests from the Teller House parking lot to the Cemetery. Depending on v... END_OF_DOCUMENT_TOKEN_TO_BE_REPLACED