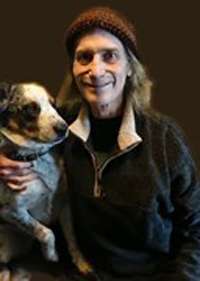 Steven Vidyaran Hanson, 68, a longtime resident of Pinecliffe, Colorado, died on February 16, 2020 of cancer. Born in Oakland, California on March 8, 1951 to Robert Carl Hanson and Margaret Bremner, Steve attended Flatirons Elementary School, Baseline Junior High, and Boulder High School. Steve worked as a chef on the Big Island of Hawaii in the early 1970s, then at the Broker Inn in Boulder. He made the most exquisite hollandaise sauce, and once earned a standing ovation from the brunch guests at a mountain eatery who had watched him prepare it on a camp stove.

Steve was a true Renaissance man: he was equally passionate about literature, art, spirituality, politics, sports, wildlife, and outdoor adventures. Steve took great pride in his work and creative pursuits, and his generosity was unmatched. He had a talent for living with an ultra-light environmental footprint, which he learned in rural Hawaii and perfected over many decades in the mountain communities above Nederland. He hiked and camped across the Front Range backcountry, especially the Indian Peaks and Rainbow Lakes areas, sharing unmapped trails and lakes with a few lucky friends. He taught many relatives and friends the art of fly-fishing, as well as other mountaineering skills.

A witty raconteur, Steve charmed friends and strangers alike with his stories and philosophical conversations. He also wrote maxims and tall tales about the heroic adventures of his beloved Akita dog, Bear, as well as the famous Chef Bon-Soir.

After recovery from a serious illness in 2008, Steve became an avid photographer, a watcher of BBC documentaries and classic movies, and he also began to practice yoga and play pickle ball. His greatest joy during the last decade of his life stemmed from the profound connections he developed with neighbors and with participants in his beloved yoga community.

Steve is survived by sisters Holly and Julie, cousins, nieces, a nephew, many beloved friends, and his faithful dog Motley.

A yoga scholarship fund has been established in Steve’s memory; contributions can be made to stevehansonyogafund@ gmail.com.

A celebration of Steve’s life will be held in the Nederland area in late July 2020.

END_OF_DOCUMENT_TOKEN_TO_BE_REPLACED

Where the dead get to tell their story By Jaclyn Schrock On Saturday, August 21, the Gilpin Historical Society held their annual Cemetery Crawl. Tickets allowed the shuttle of hundreds of guests from the Teller House parking lot to the Cemetery. Depending on v... END_OF_DOCUMENT_TOKEN_TO_BE_REPLACED

Where the dead get to tell their story By Jaclyn Schrock On Saturday, August 21, the Gilpin Historical Society held their annual Cemetery Crawl. Tickets allowed the shuttle of hundreds of guests from the Teller House parking lot to the Cemetery. Depending on v... END_OF_DOCUMENT_TOKEN_TO_BE_REPLACED