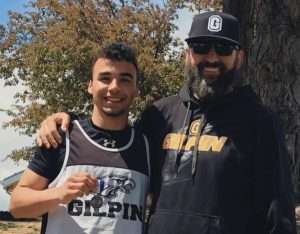 Stephen won second place and a silver medal in the 300-meter hurdles with a time of 41.94 seconds. His coach, Craig Ball, reported on the race.

“Stephen performed at his highest level of the year and delivered one of the most exciting races of the day,” Ball said. “He broke 42 seconds as he closed on and passed three runners down the stretch to the finish. Gilpin County had a large fan contingent for the finals race, which was at 2:30 p.m., so people from the county were able to come down after our high school’s graduation to support Stephen and the Gilpin track team for this final race of the season.”

The fans were not disappointed. The state track meet is “quite the spectacle on Champions’ Day,” Ball noted. “There are fans and athletes from all over the state and in all classifications, and they come together to celebrate the sacrifices and hard work of these young people. To see exuberance in young people is often hard to find nowadays, but you can find plenty of it here at this season-ending event.”

Stephen commented about his experience. “It was pretty intense to be at the state meet,” he admitted. “There were a lot of people who came to support me, and I felt honored to represent Gilpin High School.”

To give folks an idea of how special this accomplishment was, Ball shared that the track was so new that at the start of the season the team did not have all the necessary equipment, including hurdles, blocks, or even a rake for the pit. The first ten hurdles arrived about a month into the season, so the team tried them out for fun one afternoon at practice, then decided to try the hurdles event at the third meet of the season.

Stephen ran the 300-meter hurdles event five times during the regular season. He ran the eighth fastest time at the Holy Family Last Chance Meet on May 11 to qualify for the state meet. At state, he ran the third fastest time in the preliminaries on Friday, May 17 and took the silver in the finals on the 18th.

The season was one for Gilpin track and field’s record books. The whole team took advantage of the school’s new track and used their workouts to get ready for competition this year.

“This is a great facility. We are very appreciative of the community and are very proud of our new track,” Ball expressed.

New boys’ records were set by Nolan Lindberg in the triple jump and by Stephen King in the 100-meter dash, 200-meter dash, 300-meter hurdles, and the long jump.

END_OF_DOCUMENT_TOKEN_TO_BE_REPLACED

Benefitting the county, schools, and much more By Don Ireland   This year marks the 30th anniversary of casinos opening in the former little mining towns of Black Hawk, Central City and Cripple Creek, Colorado. In those early years, smoking was allowed inside ... END_OF_DOCUMENT_TOKEN_TO_BE_REPLACED