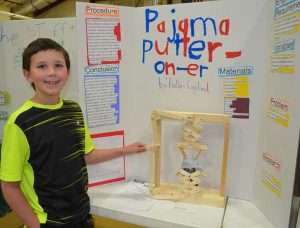 Dozens of innovative projects filled Gilpin County School’s old gymnasium last Thursday, November 17, for the annual science fair. More accurately, this year’s event was a STEM fair, or “Science, Technology, Engineering, and Math.” The goal was to broaden the scope of the students’ work and “take us into the 21st Century,” according to Montessori fourth and fifth-grade teacher Suzanne Diekman. She and Susan Sepanik, who teaches traditional fourth grade, were fair coordinators.

Elementary school pupils presented some 140 projects to more than a dozen judges in the morning, with public viewing held in the afternoon. The event culminated in an awards ceremony after school.

The grand prize winner was fifth grader Aucklynn Sacco, who took home the honors for her exhibit entitled “Numbers in Nature.” This was the third year in a row that she has won the top award. Her question was, “Where does the Fibonacci sequence appear in nature?” More on that later.

The STEM fair was held simultaneously with the traditional Thanksgiving dinner served by fifth graders to the ladies and gentlemen of Gilpin Community Center’s senior citizen program. The seniors took the opportunity to browse the exhibits following the meal. (Their findings? There were no experiments involving turkey or pumpkin pie.)

Diekman reported that the students began their scientific endeavors a couple of months prior. Some teachers made participation mandatory, and others left the choice to the pupils.

The children used three-part boards to present their questions, hypotheses, materials, procedures, data, results, and conclusions. Most of the projects also included photos, charts, graphs, or models they had built themselves. Classes took turns to come and explain their projects to the judges. The gym buzzed with multiple presentations going on all at once.

Sepanik’s students focused on engineering and came up with ideas based on their own experiences or things they were curious about. The youngsters worked on building prototypes in art class with teacher Curt Halsted. They came up with such concepts as an “Aid Doc Bot” to keep kids from getting hurt when grownups are not present, a food heater that cooks food more quickly than a microwave but makes it impossible to burn yourself, a metal enclosure to protect eagle eggs so hunters can’t get them, and every student’s dream: the “Homework Bot 1000,” which does homework for kids because they don’t like doing it. The “Pajama-Putter-On-er” (or PPO) was also intriguing; this device holds a child in place and has a crank you turn to get pj’s on a squirmy little one so parents can get them to bed faster.

“These things make sense to them in their world,” Sepanik related.

Older students researched how long it takes a Venus flytrap to digest bugs, whether or not pumice floats, how music affects heart rate, and how to build a skateboard that works on ice. Kindergartners through third graders sampled the scientific process with such ideas as how to sink a marshmallow, using fruits and veggies as natural batteries, and which soda will give you the best sugar high? (Mountain Dew)

Aucklynn’s winning project explored the Fibonacci sequence, which sounds baffling but is simply the series of numbers 0, 1, 1, 2, 3, 5, 8, 13, and so on. The next number is found by adding up the two numbers before it. The sequence is named for Italian mathematician Leonardo Pisano, also known as Fibonacci, who lived from 1170-1250. It appears in the spiral patterns of plants, such as leaf arrangements, the florets of a flower, the bracts of a pinecone, or the scales of a pineapple. Aucklynn found the design in pineapples and artichokes but not in broccoli or cauliflower.

The purpose of the fair was to allow students to learn the process of scientific investigation, to present and discuss their findings with other students, teachers, and scientists in the community, and to recognize and reward outstanding student thinking, research, and presentation.