Steampunk at the Station 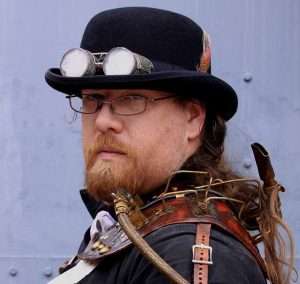 Imagine a world in which petroleum was never discovered. Gasoline engines don’t exist and nothing is made of plastic. Innovations are realized through the use of gears and steam power. Victorian fashion remains in vogue tweaked only by the elaborate metal accessories and goggles worn by the trendy. Welcome to the fantastical genre of steampunk.

Steampunk’s original inspiration sprouted from science fiction authors such as Mary Shelley, Jules Verne, and H.G. Wells. The 1960’s television show “The Wild Wild West” starring Robert Conrad and Ross Martin was instrumental in furthering notions of an abstract mechanized civilization. The 1999 Will Smith movie based on the TV series was popular at the theater and comic book artists and writers embraced the alternative history movement.

In modern society where we are constantly bombarded by the latest technology, it is sometimes fun to pretend “what if.” At the Colorado Railroad Museum’s “Steampunk at the Station” event in Golden recently, steampunks turned out in force donning their fanciful costumes. Riding behind steam locomotive No. 346, it was easy to transport oneself to the make-believe time period. A blacksmith fashioned tools and Salida Circus entertained the crowd with stilt walkers, jugglers, and dazzling aerobatic performances. Lady Elizabeth’s tea party on dining car #4801 replete with biscuits, marmalades, and Devonshire cream was the “must attend” social gathering of the day.

The Colorado Railroad Museum hosts interesting events throughout the year. For more information go to www.ColoradoRailroadMuseum.org or call 303-279-4591.

END_OF_DOCUMENT_TOKEN_TO_BE_REPLACED

Where the dead get to tell their story By Jaclyn Schrock On Saturday, August 21, the Gilpin Historical Society held their annual Cemetery Crawl. Tickets allowed the shuttle of hundreds of guests from the Teller House parking lot to the Cemetery. Depending on v... END_OF_DOCUMENT_TOKEN_TO_BE_REPLACED