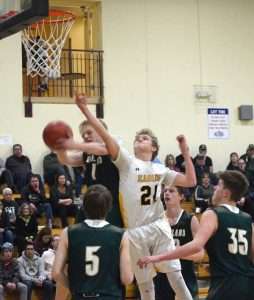 The Gilpin County Board of Education held its regular meeting on February 5 at 7 p.m.Craig Holmes, Sarah Swanson, and Kersten Armstrong were present at the start of the meeting. Brook Ramsey and Steve Boulter arrived following basketball games they were involved with. Superintendent David MacKenzie and Secretary to the Board Joni Schmidt were also present.

The boys’ varsity basketball team beat Denver Academy 72-33. The score of the girls’ game was unknown, but Gilpin lost by 2 points.

The middle school girls’ basketball team is now first in their league.

The middle school science bowl team won their first round at the regional bowl last weekend and came in 19th of 23 teams.

The Board approved several policies for first reading. These had been reviewed by the Board’s policy committee.

The old policy on annual board evaluation of superintendent performance was deleted and replaced with one enumerating the current procedures being used.

Policies regarding determination of budget priorities and vendor practices were formalized for the purpose of updating the District’s policy manual. Colorado Association of School Boards (CASB) recommendations were used.

The policy on public complaints about teaching methods was updated to align the policy with current protocol.

The policy on character education used CASB wording and stated that while parents are the primary moral educators of their children, the school and community should reinforce parental efforts. A character education program helps students to develop such traits as honesty, responsibility, compliance with the law, respect for parents, strong work ethic, and conflict resolution skills.

A sponsorship and advertising in schools policy formalized the practice the District has had in place. The District may enhance revenue through the marketing of advertising space, including at athletic events and the exterior of District school buses, among other avenues. MacKenzie said he would follow up with fee schedule recommendations, and Holmes recommended doing so as soon as possible.

MacKenzie noted that the District already had a policy on applications for a District charter school, but additional policies on charter schools were needed in case an application would be made. He wanted all procedures in place before someone would make application.

The final policy discussed concerned relations with education research agencies. MacKenzie said the District did not get many requests for research testing, but occasionally there has been a teacher who is taking a masters or graduate level course and wants to use their own students for research. MacKenzie wanted to ensure that student information was protected through the policy.

The Board approved District Calendar recommendations on first reading for 2020-2021, 2021-2022, and 2022-2023. The calendars are similar to the last three calendars the Board has approved. Holmes said public feedback on calendar preferences has been minimal in the last two or three years.

Gilpin endeavors to match Jeffco and other surrounding districts and coordinate vacations and sports schedules. MacKenzie said Jefferson County’s spring break is a week later than Gilpin’s in 2020-2021 but is the same for 2021-2022. Gilpin matches Boulder Valley.

“This is allowed by statute. Larger districts would be at 27 and higher. That would be nice for smaller districts, but it doesn’t mean that ours will be 27 — voters must pass it in the individual districts.”

MacKenzie also said the governor is in favor of funding for full-day kindergarten.

“This year, if there had been full funding, there would have been $144,542 for us. I think full-day kindergarten funding will pass this year and be in place for next year, and this would be a financial advantage for us.”

The wastewater treatment plant project is in a waiting mode. MacKenzie applied to the state for a change in compliance schedule and for surface water discharge some time ago and is still waiting to hear back.

The Board was to consider bids for the atrium stairs project during its executive session following the regular meeting.

“I’m waiting to hear back on a GOCO (Great Outdoors Colorado) grant for this project, and if we can get it, we can apply for a Daniels Fund grant,” he said.

Inclement weather on January 28 had delayed the route 1 bus when it slid off the road on Upper Apex. Another bus was sent to pick up the students from the first bus; they arrived at school 45 minutes late. The route had been plowed and confirmed by the county before 5:00 a.m., but most of the snow fell after that time.

MacKenzie said the school’s website notes that if a parent feels the weather is not safe, their child may stay home. Holmes wanted the public to know that the storm on the 28th hit at the worst possible time.

“We got the all-clear from the county that routes were plowed. The superintendent discusses closure with me as the Board president, but I left home at 4:30 that morning and the roads were plowed. We don’t take this lightly. We take all precautions to make sure this doesn’t happen, but sometimes it does.”

MacKenzie gave the Board a slide presentation of the District’s website, explaining some of the features. He highlighted an aerial photo of the school and its grounds taken by pilot Eric Ruhl, husband of teacher Monica Ruhl.

Recent news and weekly announcements are at the bottom of the home page. MacKenzie wants to direct parents to the site and hopes they will use at least that page. For example, parents can find information on the school’s accreditation and information on out-of-district and Montessori enrollment for 2019-20.

The school also has a Facebook page, facebook.com/ gilpincoschools. Three people followed the page when it was first started; now, 208 follow. Appropriate items get linked back to the website.

The Board will sponsor a Staff Appreciation Open House February 21 from 5 to 9 p.m. at the Elks Lodge.

The public session adjourned at 7:53 p.m. The Board went into executive session regarding matters subject to negotiations; personnel matters; and discussion of individual students where public disclosure would adversely affect the person involved.

END_OF_DOCUMENT_TOKEN_TO_BE_REPLACED

Where the dead get to tell their story By Jaclyn Schrock On Saturday, August 21, the Gilpin Historical Society held their annual Cemetery Crawl. Tickets allowed the shuttle of hundreds of guests from the Teller House parking lot to the Cemetery. Depending on v... END_OF_DOCUMENT_TOKEN_TO_BE_REPLACED