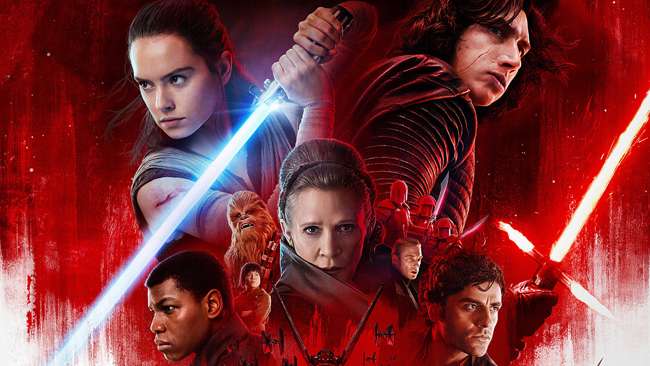 The biggest movie event of 2017 happened last weekend; the opening of “Star Wars: The Last Jedi.” Not only is it the biggest opening in ticket sales for 2017, it is also the second largest opening ever behind its predecessor, “Star Wars: The Force Awakens.” After the meandering storylines and childishness of the prequels, fans of the original trilogy were hungering for a return to the familiar Star Wars of their childhood and “The Force Awakens” delivered. Did “The Last Jedi” live up to expectations or was the Force not with it?

The movie opens with the Resistance evacuating their base after being discovered by the First Order. During the evacuation, several star destroyers and a dreadnaught appear, so Commander Poe Dameron, played by Oscar Isaac (“Ex Machina,” “Inside Llewyn Davis”), sees this as an opportunity to destroy a dreadnaught before jumping to hyperspace and escaping. Things do not go as planned; however, and the Resistance loses a large portion of their fleet and people. The First Order manages to track the rebels after their jump to hyperspace leaving no choice but for the Rebels to run just out of range until they run out of fuel and are slowly picked off. Meanwhile, Rey, played by Daisy Ridley (“Murder on the Orient Express,” “Scrawl”), has found Luke Skywalker, played by Mark Hamill (“Star Wars,” “The Flash”), and is hoping to be trained in the art of the Jedi, but Luke is a little less than willing. As the rebels are desperately fleeing, Rey must balance her priorities between training and getting back to the Resistance fleet.

Expectations. Since “The Force Awakens” practically mirrored the original “Star Wars,” I expected and feared that “The Last Jedi” would, closely follow “The Empire Strikes Back.” Although beginning in the same manner, I was very happy this movie did not copy the old material, but set off on its own track. Two big questions from the last movie were left hanging which this movie was expected to answer: who was Snoke, played by Andy Serkis (“The Lord of the Rings,” “Black Panther”), and who were Rey’s parents? The answers to both questions were unexpected – hooray!

Acting. Yes, there was some great acting in the sci-fi spectacular and for me, from one surprising source: Mark Hamill. As a child watching the original films, I always thought Hamill was poorly cast and I did not like him as a whiny brat looking for adventure. Since those films, Hamill has done some excellent voice-over work and bit roles on television showing he is skilled far beyond his Skywalker character. This time around, Mark’s portrayal of the aged Jedi Knight was nuanced and excellent.

Special effects. When making a Star Wars film, less CGI is a good rule of thumb. “The Last Jedi” has some impressive special effects. This should be no surprise, but after the prequels, one cannot assume it to be true.

The music. John Williams is continuing to compose the score for these films, so… duh, it’s great. There is an undercurrent of dissonance tension weaving through the main themes setting the tone perfectly for the plot. When appropriate, we hear exact duplication of the familiar themes of the original films.

Let the past die. This is a recurring theme in this film and it seems to be directed at fans. At times, it means “forget about the prequels; we are.” Luke has a monologue that pretty much contradicts everything the prequels taught us about the Force. The phrase is really referencing Luke’s goal to eliminate the Jedi Order entirely.

No ewoks. The ewoks of “Return of the Jedi” were such an obvious cash grab in merchandising, they cheapened the story. The trailers for “The Last Jedi” introduced some cute birds that could have been the same thing. The birds, though, turned out to be less-intelligent nuisances to the heroes and not important to the story. It was the perfect amount of cuteness in a galaxy of cruelty.

Surprise cameo. There was a special appearance by a character that was kept completely unspoiled. Sometimes this leads to a forced dialogue to justify putting the character in, but this was different. Director Rian Johnson honored the character and made it make sense to the story.

Gifted characters. For the convenience of plot, some characters seem to be “gifted” in skills that they would not normally have. For instance, a mechanic has the ability to fly a space fighter into battle with no previous training.

Um… that’s it. Upon first viewing, this is all the bad I could come up with. I will be seeing it again and will surely find several things that bug me; plot holes, unnecessary filler, etc., but until then, my list is done.

“The Last Jedi” took the Star Wars saga in a slightly different direction which may upset some fans, but I enjoy the change and am looking forward to the conclusion. The story feels natural to me and fits within the galaxy I know from my childhood. Even though I was entertained by this film, it still felt like an “in-between” story to get from part one to the conclusion. I’m not sure how much of it makes sense without first seeing “The Force Awakens,” therefore my rating must be lower. The film is rated PG-13 for sequences of sci-fi action and violence. I rate the film four and a half out of five imperial guard ninjas. My lovely adult daughter rates the film four and a half out of five caretakers.

END_OF_DOCUMENT_TOKEN_TO_BE_REPLACED

Where the dead get to tell their story By Jaclyn Schrock On Saturday, August 21, the Gilpin Historical Society held their annual Cemetery Crawl. Tickets allowed the shuttle of hundreds of guests from the Teller House parking lot to the Cemetery. Depending on v... END_OF_DOCUMENT_TOKEN_TO_BE_REPLACED

Benefitting the county, schools, and much more By Don Ireland   This year marks the 30th anniversary of casinos opening in the former little mining towns of Black Hawk, Central City and Cripple Creek, Colorado. In those early years, smoking was allowed inside ... END_OF_DOCUMENT_TOKEN_TO_BE_REPLACED