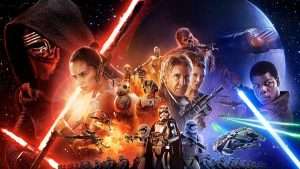 A new hope for the franchise – movie review

It is finally here; the seventh movie-chapter in the Star Wars saga which began almost forty years ago in the mind of George Lucas. When Star Wars was released in 1977, we didn’t know it was A New Hope and there was no talk of sequels. And then, The Empire Strikes Back opened with “Chapter V” printed in the opening scrawl. From that point, not only did fans start discussing what might have happened in chapters one through three, but also eagerly discussed rumors that this was a nine-part story and there would be parts VII, VIII, and IX. Well George Lucas did decide to tell the origin story in the first three parts, but by that time, Lucas lost sight of what made Star Wars such a big hit in the first place. Perhaps he was tired of the series, or perhaps his loss of creative vision helped his decision to walk away and allow someone else to take the helm. The Force Awakens will be the first in the Star Wars franchise practically untouched by the original creator as direction is handed over to J.J. Abrams. The pre-release hype has been crazy and at times manic with anticipation of a movie that recaptures the feelings we had the first time we saw Star Wars. So, how well does this movie stack up to the hype, and is it any good? Or did Lucas make a big mistake walking away?

I am a fan. I grew up with Star Wars and I recall standing in line three hours to see a showing of The Empire Strikes Back at the Cooper Theater on South Colorado Boulevard. Five years after the first movie was released, I walked by an appliance store and was captivated by the TV in the window showing Star Wars; standing on the sidewalk watching it from the twin Tatooine suns scene to the end. To prepare for this movie, I have stayed away from social media and have not read a single review from another person to try to keep this one free from outside bias. Due to how tight Disney kept this movie from spoilers and leaks, I was not able to see it early, but instead, happily bought my tickets like everyone else. I will not be a fair judge of this movie as a stand-alone film for it is difficult for me to view it from a Star Wars virgin’s eyes. So what does this fanboy think? Let’s find out.

It has been thirty years since the defeat of the Empire and the death of Darth Vader. A new dark force is rising in a group called The First Order ruled by an unknown entity appearing only as a hologram and referred to as Supreme Leader Snoke. The First Order, as any good villainous group likes to do, wants to rule the galaxy, but thinks it cannot do so until the last remaining Jedi, Luke Skywalker, is found and killed. They have been building a huge army of Stormtroopers, not through the cloning program, but by kidnapping young children and raising them as soldiers. Skywalker vanished a few years ago leaving pieces of a map of his location and a void in the light side of the Force. The First Order is being led by the masked, ruthless villain Kylo Ren who seems to have a personal vendetta against Luke Skywalker. Fighting to stop the First Order is the Resistance led by General Leia Organa. The Resistance is desperate to find Luke Skywalker, whose map pieces were distributed to various locations, and General Organa dispatches her best pilot, Poe Dameron, to retrieve a piece of the map.

Meanwhile, one Stormtrooper with a conscience, Finn, refuses to kill villagers in cold blood and seeks a way out. Poe is captured by the First Order, but escapes with Finn’s assistance and the two of them end up crashing on the hot and dry planet Jakku. When Finn comes to, he assumes Poe did not survive the crash and takes off on his own to find a scavenger Rey accompanied by a BB-8 droid that is said to contain a missing section of Luke’s map. This sets the stage for the rest of the movie as Finn and Rey try to get BB-8 back to the Resistance while being hunted by the First Order.

The heroes of this movie, and most likely the rest of the trilogy, are Finn, a deserting Stormtrooper, and Rey, a mechanically gifted scavenger without an identity with an uncanny knack to tap into the Force. The villains are Kylo Ren, a masked Sith Lord with a conflicted conscience, and Supreme Leader Snoke, an unknown and mysterious, but evil entity. Other characters, both familiar and new, surround and interact with the heroes and villains to achieve their ends; to find Luke Skywalker to either appeal for his help or to kill him.

Abrams tapped into the heart of the original trilogy making characters more important than special effects. In whatever incestuous galaxy this is, the main characters all seem to have connections in one form or another. Finn’s origins are not revealed, but can probably be guessed. Kylo Ren’s fascination with Luke, Han, and Leia, makes sense once the connection is revealed; and that connection is proclaimed fairly early in the movie. (A lost lesson from Abrams?) Rey’s past also remains mysterious, but you know she must be related in some fashion to known characters. The point is the story is told in such a way that you care about the characters, their motivation, their struggle, and their joy.

Some of the missteps of Lucas are avoided. The simpering C3PO, so well introduced in the original and becoming a huge annoyance in the prequels, is relegated to a minor character and the annoyance factor is toned way down. There are no CGI characters inserted for comic relief with offensive racial stereotyping. The special effects are high-quality without distracting from the movie. Abrams went with non-CGI effects for many of the aliens and used the motion-capture technology developed with the Lord of the Rings movies.

Abrams has an MO in his movies, but is such a fanboy himself, refrained from some of his more agitating ideas (lens-flare overload) and focused on what Star Wars should be. As Abrams is known to do, he casted as minor roles several of his good luck charms such as Ken Leung, Michael Giacchino, and his old friend Greg Grundberg. He also inserted many, many references to the original movies as subtle as symbols on a back wall to less subtle such as the two footed square looking clunky droid walking by to the more obvious spoken lines about trash compactors. Abrams was also able to utilize several famous actors in cameo and uncredited roles such as Simon Pegg and Daniel Craig. He honored those who have voiced characters in the animated series by including several of them. Somehow, with juggling all these people, it never distracts and indeed, unless you have a keen ear and sharp eye, you will never notice.

One of the noticeable differences between the casting of Lucas and of Abrams is that Abrams either intentionally uses or blindly casts women in key roles. I love that Rey seems to be the ultimate trilogy heroine. Women are liberally used in this story as they naturally would be in the galaxy of this tale.

John Williams is back for the score. The good part is he delivers fresh melodies and themes for the new characters while weaving in some of the old. The movie is audibly fresh even with the iconic opening credits theme.

Logic. Luke left a map for folks to find him when he could have just placed the location in the head of his force-aptitude sister. Why hide from society if you’re going to give them a way to find you? Once again, it’s the Death Star size and improbability issue. The Death Stars were the size of moons, but on each one, surprisingly and improbably the key locations were all located within walking distance. In The Force Awakens, the First Order has built a “Starkiller” around a sun harnessing the sun’s energy to create a death ray that can destroy several planets at once. Wouldn’t you know it, the main characters and key points all seem to congregate within range of each other.

There was one character death that was, unfortunately more of a “duh” than a surprise. So many things pointed to this character being killed off, that a lot of the emotional impact was lost.

Okay, logic aside, that’s about all I can come up with which could be considered bad.

This movie rocked with the force of excellence. You can tell J.J. Abrams cared deeply about this story and the series (much more so than Star Trek, I’m afraid). There were some excellent performances on the parts of Daisy Ridley, John Boyega, Harrison Ford, Carrie Fisher, Mark Hamill, and Adam Driver. The dark side of the prequels could not quench the light of this one. There are one or two things that didn’t quite live up to the hype. The more I sit on this, the more I think about how similar this story is to the original tale and I hope it takes some different twists and turns or otherwise this trilogy will become predictable and a tad boring. The score is great and fit the movie perfectly. The editing was mostly perfect, a tad bit rushed nearer to the end. The movie is rated PG-13 for sci-fi action and violence, but I found nothing terribly horrific. There are definite scenes of violence, angry lightsaber duels, and a few drops of blood. If you remember loving Star Wars without nightmares when you were seven, I think our seven year old children (or gasp, grandchildren) will be fine – (spoiler alert?) the heroes win. I rate this film four and half out of five Abrams’ good luck charms. My lovely wife (not a fangirl) rates it four and a half out of five fanboy nods. My wonderful 18 year old fangirl daughter rates it five out of five Stormtroopers that can aim.

END_OF_DOCUMENT_TOKEN_TO_BE_REPLACED

Benefitting the county, schools, and much more By Don Ireland   This year marks the 30th anniversary of casinos opening in the former little mining towns of Black Hawk, Central City and Cripple Creek, Colorado. In those early years, smoking was allowed inside ... END_OF_DOCUMENT_TOKEN_TO_BE_REPLACED

Benefitting the county, schools, and much more By Don Ireland   This year marks the 30th anniversary of casinos opening in the former little mining towns of Black Hawk, Central City and Cripple Creek, Colorado. In those early years, smoking was allowed inside ... END_OF_DOCUMENT_TOKEN_TO_BE_REPLACED