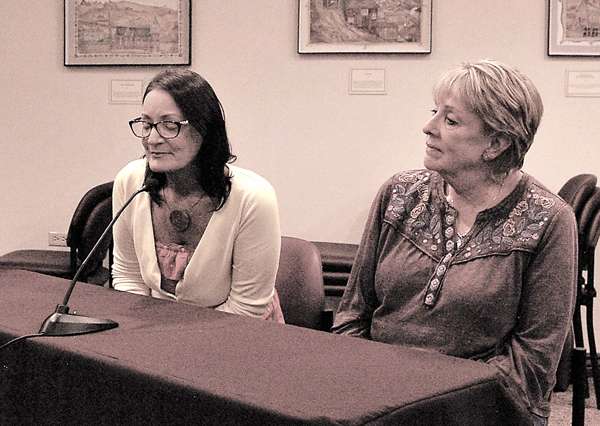 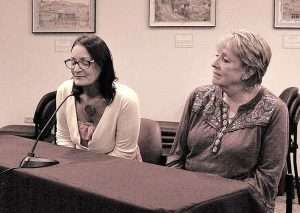 Council met with Staff for an alderperson vacancy candidate forum on Tuesday, August 3 prior to the regular meeting. Mayor Fey opened the Work Session at 6:13 pm. Two people expressed interest in being appointed to the vacant council seat: Michele Roussel and Marcia Enlow. Council members took turns asking questions to either or both candidates.

Michele Roussel has been a resident for eight years and is the gallery manager at Washington Hall for the Gilpin County Arts Association. She is the secretary for one of the county’s political parties and is on the Planning Commission. “I feel I could bring some strong assets to the table,” says Michele, “leading with common sense, thoughtfulness, exceptional work ethic in addition to having good people skills and practicing tasks at hand in a nonpartisan manner.”

Marcia Enlow has been a resident for 13 years and has worked in Central for seventeen years. She served on the Fire Department 501c3 Board and is an alternate on the Planning Commission. “I love Central City,” says Marcia, “and I want to see it succeed on a commercial as well as residential level.”

Alderman Jeff Aiken asked of Michele, “you work at the arts thing (Washington Hall Gallery), so you’re involved in the community. What else are you involved in?” Roussel answered that she gets to meet a lot of people in the community through the gallery, including people from all over the world, and she is “Very honored to be a part of that.” She has also participated in the City clean up days. “I try to participate when I can, and I have no problems stepping up to a challenge.”

Alderman Aiken then asked both candidates, “Jeffco Health recommended masks in many indoor gatherings where you cannot be socially distant; how do you feel about the mask issue?” Michele answered, “I feel vaccinations are a personal thing, but of course I would comply with a mask mandate. We implemented temperature checks and distancing in the gallery. I don’t see a problem with that; it’s become part of the norm at this point.” Marcia answered, “I absolutely agree with wearing masks if that’s what they recommend, also vaccinations. We need to keep everybody safe.”

Alderwoman Laratta asked both candidates, “What is our biggest hurdle to overcome in Central City to remain stable and grow economically and as a whole?” Michele answered, “My perspective is finding a balance between local businesses and casinos; a common ground so both can thrive in this community and bring in more visitors as a destination city.” Marcia replied, “We need to fill these (empty) buildings. We need to get things in them that are not casinos so there is a diversity of things to do. If we had different opportunities to do here with family, it would be a wonderful thing.”

Additional questions were asked about when the candidates found out about the vacancy, and if they were planning on staying here throughout their term. Both candidates gave favorable answers to each question. A recording of the meeting can be found on the City’s website.

The Mayor called for a motion to approve the consent agenda which consisted of the minutes from the July 20 meeting and regular bill lists through July 27. Alderwoman Laratta moved to approve the Consent Agenda and was seconded by Alderman Aiken. The motion passed unanimously.

Mayor Fey opened the floor to the public for anyone who wished to speak to a topic on that night’s agenda. Commissioner Web Sill chose to address Council saying, “I’m not a voter in Central City, but what I do have is two pieces of important experience with Michele. My wife is on the Art Board and Michele is a hard worker, a go-getter. She’s intelligent and would be a very good member of Council.” He also said that he gets to work with people that make him look good and Michele is one of those people.

Council considered action on five items of new business: consideration of the candidates for appointment to the vacant council seat, the 2020 Audit Presentation, and three Resolutions.

Alderwoman Tinucci asked how much consideration council should give toward a candidate who has already gone through the process of elections. Mayor Fey commented he considers prior candidacy runs important because in his own experience, he was surprised how much work went into getting signatures and campaigning. Both candidates have shown intent and interest in being part of the city government. Fey commented that only one candidate gave a letter of interest within the time limit and wondered if that was on us (the council) or the candidate. Alderman Aiken responded that “we are on uncharted ground.” Mayor Fey then mentioned that the Charter says they must have an appointment within 30 days. “We are going to be choosing (appointing a candidate) on the 17th of August.”

No Inconsistencies in 2020 Audit

Finance Director Abigail Robbins presented the 2020 Audit results which were conducted before July 20th. The unmodified opinion is, “There are no inconsistencies in your processes, the financials were all presented fairly.”

Alderman Aiken said, “Great job as usual; what a great finance director and city manager we have.”

Alderwoman Laratta moved to accept the 2020 Financial Audit and was seconded by Alderwoman Tinucci. The motion passed unanimously.

Community development Planner and Main Street Advisor Lindsey Flewelling introduced Resolution 21-20 which would support the grant application for a community impact grant from the State Board of the Great Outdoors Colorado Trust Fund for the construction and completion of the Stairway to Heaven project. The financial impact to the City would be a 24% grant match of $38,531 plus in-kind work of $3,780. The grant is submitted at the end of August and would be awarded in late 2021, so the cost would be budgeted in 2022. The project is to construct an official trail between Gold Mountain Village Apartments and downtown Central. Through the years, many residents of Gold Mountain have created an unofficial trail as they traipse up and down the mountain, so the City desires to make an official trail in honor of fallen firefighters Cody and Shelby Allen.

Alderwoman Laratta moved to approve Resolution 21-20 and was seconded by Alderwoman Tinucci.

Alderman Aiken commented, “I haven’t seen any drawings or blueprints. I was never on board with the construction of this in consideration of parking and crossings.” Manager Miera responded that the design is part of the project cost and will be created as part of the process if the grant is received. Part of the process will be determining the best way to accomplish the route. Alderman Aiken then said, “I would like to get some input from people living there.” To which Alderwoman Laratta responded, “Go talk to them, Jeff.” The Resolution passed unanimously.

Public Works Director Sam Hoover introduced Resolution 21-21 which would award a bid for the Central Street Striping Project and authorize the city manager to execute a contract with Harvey Contractors Inc., dba American Striping Company. This is for striping four miles of the Central City Parkway and eight miles inside the City. “We only received one proposal,” said Hoover. The city has commonly received two companies competing for road projects. The bid came in at $48,822 which reflects increases in fuel costs and paint products. Hoover recommends awarding the contract. “This is not a project that is done in-house because the equipment cost is high,” said Hoover, “very expensive.” There is also the issue of surplus paint and how to handle that.

Alderwoman Laratta moved to approve Resolution 21-21 and was seconded by Alderman Aiken. The Resolution passed unanimously.

Historic Preservation and Code Enforcement Officer Lindsey Flewelling introduced Resolution 21-22 which would approve an amended Grant Guide for the City of Central Historic Preservation Paint Reimbursement Grant Program. This would add application deadlines of September 1 and October 1 or until funds are exhausted. As of today, only three applications were received and approved; there are also three additional applications under consideration for approval. The grant funds must be dedicated by the end of the 2021 year even if the funds are not expended until 2022. All work must be completed in 2021.

Alderwoman Laratta moved to approve Resolution 21-22 and was seconded by Alderwoman Tinucci. Mayor Fey reported, “I’ve heard from many of my neighbors that they would partake in the program if they could paint their own house and use funds for materials. Is that something we could amend this program at this time?” Alderman Aiken piggybacked, “I would be in favor of that.” Attorney McAskin responded, “I think if there was direction to amend, staff can come back with the amendment.” Manager Miera added, “I think it is possible; we have to address performance issues through the Historic Preservation Commission. This is certainly something we can approach and adjust.” The Resolution passed unanimously.

Manager Miera reported, that the Floyd Hill CDOT project is getting close to releasing an RFP for the project. This is the highway project improving sections of I-70 from Floyd Hill through Exit 243 (Central City Parkway) to increase traffic flow and speeds. A tunnel is still on the table but is not the most economical. If there is a contractor that can do the tunnel within the set project budget, it will be considered. Line of sight for exit 243 is being taken into consideration.

Alderwoman Laratta commented, “I think we need a policy on wearing masks instead of guessing, I personally don’t want to guess about my safety. If someone hasn’t been vaccinated, I think they should be wearing a mask. It isn’t a political situation it’s a public health situation.” The guessing is referring to knowing whether someone is vaccinated just by looking at them or if they’re wearing a mask.

Alderman Aiken commented that today is the anniversary of Lew Cady’s death. “I think he would be very proud of what’s going on with the Belvidere.”

Alderwoman Tinucci commented, “It was really exciting to be part of the Pocket Park celebration today and how many people from the community were there.” She then commented that she doesn’t feel like she has enough information about the changes regarding COVID to give her opinion regarding policy.

Mayor Fey said, “We don’t have a health department; we have been relying on the County which is relying on the state which is relying on the federal government. It’s been out there for 18 months now and people know about it. I’m afraid that coming out with any stringent policy will bring about more divisiveness; more conflict on the streets considering the policing of policy. I don’t think anything we do will change people’s behavior.”

Mayor Fey publicly thanked Marcia Enlow and Michele Roussel for coming forward to apply for the vacancy on the Council.

Mayor Fey adjourned the regular meeting at 8:37 pm. The next regular Council Meeting will be Tuesday, August 17, 2021. 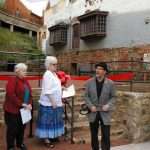 A pocket party everyone can enjoy
Next Article 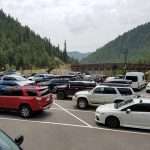