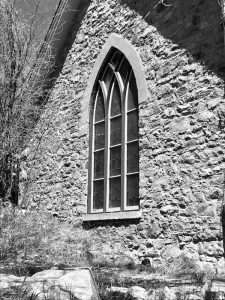 Whatever your walk in life – join us in Central City

Saint Paul’s Episcopal Church has been part of the life of Central City since the 1860s. The current church building was constructed by Cornish stonemasons in 1874, and it has not changed much. The stained-glass windows, many of the furnishings, and the retired carbide lamps hanging from the ceiling are original. A Sunday morning visitor is likely to see communion celebrated with a 19th century silver chalice and century-old altar linens.

We are a sacramental, inclusive community, and you don’t have to be a member of our church to share communion with us. Services are drawn from the 1979 Book of Common Prayer and led by either a visiting priest or a parish member. We like to sing, and the hymns often have familiar tunes that people can manage without reading music. Our services will seem most familiar to someone who has attended a Roman Catholic or Lutheran Church. We usually ask the youngest person in attendance to ring the bell.

An old joke among Episcopalians goes, “Wherever two of us are gathered you’ll find three opinions, and wherever you find four of us, you’ll find a fifth.” The idea is that we tend to be comfortable with a wide range of theological opinions and that we find unity when we pray and socialize together. Prominent Episcopalians have ranged from presidents George Washington, Franklin Roosevelt, and George H.W. Bush to Associate Supreme Court Justice Sandra Day O’Connor, musician Jerry Garcia, and entertainers Humphry Bogart and Robin Williams.

The Episcopal Church is part of the worldwide Anglican Communion headed by the Archbishop of Canterbury. He is viewed as a symbol of unity, a first among equals, and a link to our beginnings with the Church of England. Anglicans are the third-largest grouping of Christians in the world next to the Roman Catholic Church and the numerous Orthodox churches. The bishop is the Diocese of Colorado, and is Rt. Rev. Kimberly (Kym) Lucas. When she was installed earlier this year, Bishop Lucas made history by being the first woman and the first African American to hold that position.

When people are baptized or received into the Episcopal Church, they promise to “strive for justice and peace among all people and respect the dignity of every human being.” On our part, we pray that God sends the Holy Spirit and gives the new member “an inquiring and discerning heart, the courage and will to persevere, a spirit to know and love God, and the gift of joy and wonder in all God’s works.”

Services at St. Paul’s are at 10:00 a.m. every Sunday morning. We’re located on First High Street next to the History Museum. There is some parking on the street, but if there is a crowd you can park in the Century garage and take the stairs just east of Johnny Z’s.

Whatever your walk in life, you will be welcome.

END_OF_DOCUMENT_TOKEN_TO_BE_REPLACED

Benefitting the county, schools, and much more By Don Ireland   This year marks the 30th anniversary of casinos opening in the former little mining towns of Black Hawk, Central City and Cripple Creek, Colorado. In those early years, smoking was allowed inside ... END_OF_DOCUMENT_TOKEN_TO_BE_REPLACED