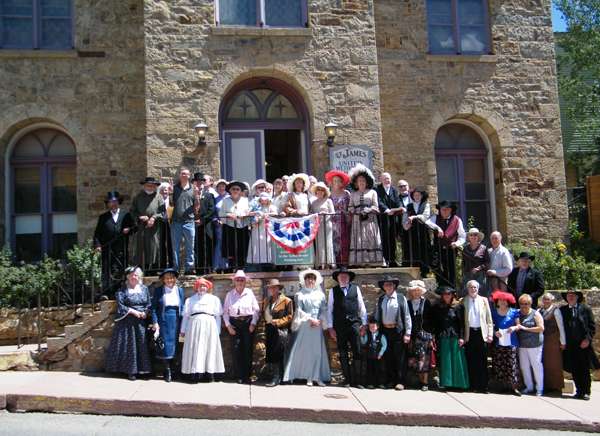 The 158th Anniversary and Homecoming Celebration was a joyous occasion for St. James United Methodist Church, 123 Eureka Street in Central City. The traditional yellow roses were in full bloom for the occasion and the festive cake, punch and tables perpetuated that same yellow tradition. The masses of blossoms on the old bushes outside the church are said to have come from Cornwall England. Many transplants and cuttings found throughout homes in the area kept that hopeful color obvious. Many of the attendees in the upstairs sanctuary dressed in Victorian attire in honor of the original members of the church. The St. James United Methodist Church is recognized as the longest continual Protestant Church to still hold regular services in Colorado.

Our Lady of Guadalupe Church in Conejos of San Luis Valley in Southern Colorado built their impressive church in 1858 with people moving into Colorado from New Mexico. Sadly, an electrical fire just before lent 2016, in an addition to the original historic building, caused severe smoke damage so services continued in a nearby Catholic church. Oddly, they had another fire 90 years previous that also caused them to meet in another temporary location. This is why Central City’s St. James holds the distinction of the oldest continual Protestant Church. Being a stone structure it survived Central City’s fires.

St. James Methodist Church is considered to have been organized July 10-11, 1859. For a while, services were believed to have been held in a home of the infamous laundress, “Aunt” Clara Brown. Methodist’s often provided missionary circuit riders as preachers traveling to various communities. The original traveling preachers were Rev. William H. Goode and Rev. Jacob Adreiance. A wagon maker and lay preacher, Rev. George W. Fisher, was the first residential pastor, according to the website waymakers.com. Gilpin County Museum on High Street in Central City (the former school house), dates construction of the current location beginning in February 1863, with the stained glass installed 1871, and the building dedicated July 21, 1863.

The historical craftsmanship honors the sacred focus of St. James revealing how amazing and mighty God is bringing His people to be dependent on the spiritual Holiness of God and his love of mankind through teaching about Jesus. St James United Methodist’s congregation remaining strong through the decades hints at the humbling choices His people make to honor God by joining in His plan to spread the Good News more than getting caught up in the distractions for which late 1800 living demanded and the pioneering miners are known through the mid-1900s. Even though Central City may have had modern conveniences before Denver and was considered to bring a higher culture to their community with the Opera House, Teller House, and Gilpin Hotel, the churches may have helped maintained what is really important – spiritual health. The magnificent stained glass and interior details have been maintained to keep historical integrity.

The 10:00 am service on Sunday, July 9, 2017 held to their traditions, but the original organ was not played. The upright piano accompanied many hymns: What a Mighty God We Serve, When the Saints Go Marching’ In, Just a Closer Walk with Thee, Precious Lord Take My Hand,  Just a Little talk with Jesus, and Across the Hills of Time. Two of the songs were sung well by Quinn Silco and Lynn Snyder, rather than the opera singers originally planned. Ragtime Pianist, Richard Kroeckel, also played the introduction Grow Quiet, Grow Still, Grow Close to God, the hymns, and a ragtime closing that had couples dancing down the aisle to exit to the fellowship hall, followed by festivities downstairs and a group photo in front of the church.

The Rev. Dr. Richard A Vickery, Jr invited Dr. David Forsyth to present the message on this historic occasion. Dr. Forsyth is the 8-year Executive Director of the Gilpin Historical Society and former tour guide for the Teller House and Gilpin Historical Museum. He spoke on the most common questions asked of him, the mysterious unknown details of Clara Brown. He declared many reports of her activities to be exaggerated, and tried to identify what he understood to be true, even though some newspaper reports of her did not agree with his understanding. Clara Brown was a laundress and real estate investor, having been a former slave. She is remembered as being kind-hearted, contributing to other former slaves and to religious organizations in her years, from approximately 1810 to 1885.

Clara Brown was likely born about 1810, some say in Virginia declaring herself 60 in the 1870 Colorado census. Dr. Forsyth named her first Master, debating to have been in Kentucky or Tennessee. It has been mysterious that her documentations have not been revealed, detailing that slave masters often kept accurate records of their slaves, but none had identified her birthing that would have been recorded through her mother. She is said to have been sold to a slave owner in Tennessee with her mother when she was about 8. When the Tennessee slave master passed, Clara’s husband and son, Richard were sold to someone in the deep South. She desperately tried to keep track of the locations of her daughters: Margaret and twins Paulie Anna and Eliza Jane. Margaret was believed to have had many different masters and may have passed before Clara. Paulie Anna passed when she was 8, so Eliza Jane was the child she continued to seek.

Clara was purchased by a hat maker, perhaps in Kentucky and took on his last name of Brown. When he passed away in 1856, he willed $300 to Clara, a most unusual opportunity for a slave. Mr. Brown’s three daughters wanted to help her buy her freedom, so put her on the market for $12. She would have had to only come up with 1/3 the cost to buy her freedom with $4. Unfortunately, a very high bid was given for her of $300, so with the inheritance, she purchased her freedom by paying $100. The 1850’s was not a safe place for a free slave, since other black people had been kidnapped and returned to slavery. She first went to St. Louis in 1858 and then on to Kansas where she began her career as a laundress. Because of continued segregation, she could not purchase a ticket to travel from Kansas. Clara was able to get hired to travel with 25 men as a cook to Colorado with her laundry tub and supplies.

Clara Brown first purchased a home in Mountain City (between Central City and Black Hawk) for $50 cash. This is where she did her laundry business and may have held church meetings. She held many other properties in the area, in Boulder and in Denver. It is believed that she had a monthly income of $1,000. Sadly, unable to read or write, white businessmen swindled some of those properties from her. She did get to sell the Mountain City house for $500.

When blacks were freed in 1879, she searched for her daughter in Kentucky. She did not find her, but did help many other freed slaves get to Colorado and nearly lost her own savings in the process. She returned to Gilpin County where she continued to be prosperous, so shared generously with the building of St. Paul’s Presbyterian Church in Central City, next door to the school.

She asked everyone she met about Eliza Jane, and though her health was failing and she was living on Arapaho Road in Denver, someone thought they may have found Eliza Jane in 1884. Clara Brown was able to send a telegram quickly and confirm that her Eliza Jane was in Council Bluff, Iowa. She no longer had the resources to travel, so a Denver newspaper posted the need of the well-known Clara Brown and donations arrived so she could travel to see her daughter. When they met, it is told she jumped out of the street car before it stopped near her daughter’s home being so happy to see each other. Eliza Jane and Clara’s granddaughter traveled with her back to Denver and lived with her until she passed away. Her last trip to Central City was in 1885 when the Colorado Pioneer Association welcomed her as the first women member, providing a stipend for her lifelong efforts.

The anniversary and home coming event is an annual tradition at St. James United Methodist Church in Central City. The Gilpin Historical Society cooperates with the church in this event. We look forward to the other 2017 activities they support to keep the traditions fresh in the lives of the current Gilpin County residents. Saturday, August 26th is the Cemetery Crawl, and Saturday, September 9th is the Stroehle House Tea. Other events on the calendar found at www.gilpinhistory.org.