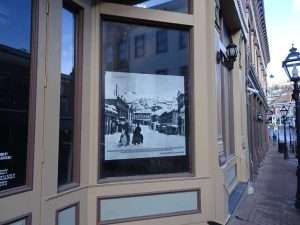 You may have seen some interesting developments taking place in some of the vacant storefront windows in the downtown Central City area. Instead of vacant windows staring back at the frequent guests, now there will be large historic photos displayed that are pertinent to that building. This is a project that Eric Miller has initiated to help present historic downtown Central City in a better light.

Eric Miller states, “The first couple of large 4×4’ prints we’ll be displaying in some of the vacant storefronts around town is a project that took a while to come fruition, but thanks to the City of Central for working with me on approving my concept as well as funding it via a grant. Thanks also to Gilpin History for procuring a few of the images, and to Jeremy Kaiser for the help with the installation. Keep an eye out around town for more prints and enjoy the history. And yes, we’re standing in the entrance to the old Grubstake.”

The first six historical photographs are located on the north side of Lawrence east of the Visitor Center, in buildings that were known as the Edmundson Blocks. Dr. Edmundson was a Central City physician and a prominent citizen who built three commercial buildings over a five year period. The buildings were known as “blocks” and Dr. Edmundson built them as investment property. The Edmundson Blocks were built as part of the rebuild of Central City, which occurred right after the great fire of 1874. Per Frank C. Young, “The great fire of May 21, 1874, swept the gulches from end-to-end and left Central City a mass of smoldering ruins and a loss of over three-quarters of a million dollars.” Three of the following historical photographs were taken before the great fire:

The fifth historical photo is of the Montana Theater Concert Hall, showing the band on the balcony and patrons below. The theater displays the sign, “Concert Hall Billiard Rooms.” The nearby sixth historical photograph looks north on Main Street, and depicts the wood constructed commercial buildings. At the end of Main Street the Montana Theater Concert Hall is visible. The tenth historical photograph was taken early in the 1870’s, still prior to the great fire. This photo is from a similar vantage point, but showing more of the town and hillside, allowing the viewer to see the town’s growth.

The 1880’s began a time of prosperity, fueled by gold mining that lasted until World War I. Three historical photographs portray early 1900’s stores, and the people who ran them. The second historical photo displays the inside of a hardware store, showing the merchandise and the salesclerks. The fourth historical photographs depicts the Charles Trenowith Store, which features a complete line of men and boys’ clothing, gents’ furnishings, haberdashery, boots and shoes.

The ninth and tenth historical photos are located in the A.O.U.W. building. This building survived the great fire and was originally built as a one story building. The A.O.U.W. Building got its name from the Ancient Order of Workmen Lodge No. 16. The Lodge purchased the building and enlarged it to the back, and added a second story, for the Lodge meeting room.  The Central City post office was on the main floor.

The first and seventh historical photographs depict the aftermath of a record setting snowstorm, which occurred over several days and ended by December 5, 1913. According to a Weekly Register-Call article, “Never within the history of Gilpin County was such a site witnessed as that which greeted our people this morning when they woke from their slumbers to get ready for work. There was snow everywhere, ranging from 5 to 20 feet in depth, some of the houses were virtually covered out of sight, with only the chimney sticking through.”

The following is an interview with Eric Miller, about the Historical Photograph project.

Eric – Yes, the large prints and photos I installed in the visitors center some five years ago was the inspiration. At that time the Visitor’s Center was a mish-mash of images that were randomly hung on the walls, and I approached the city about making categorized photo installations that act as more of a learning experience about Central City for the viewer as they walked through the space, which I believed was accomplished. We wanted this project to have the same effect.

WRC Question – How were the images selected and were they matched with the display building?

Eric – The images were selected based on my viewing thousands of photographs over the past 25 years of collecting and studying local history. I wanted the photos to be, as with the Visitors Center, to be more of a learning experience rather than a random old photo in the window. My goal was to find images that were relevant to where the pictures were to be hung. I included text on the prints that helps describe the photo but more so it helps engage the viewer in the scene.

WRC Question – How are the 4 x 4 pictures made?

Eric – The 4×4 prints were made by taking making high-resolution scans of the original 8×10″ photos and then sending them off to Fastsigns in Arvada, who did the printing for the Visitor’s Center project, where they were printed using a UV protected ink on sheets of 8mm PVC. Once the prints were delivered to Central City, I made a basic wooden 4×4’ frame that the prints were then mounted to and with the help of a couple eye hooks and some fishing line they were ready to hang.

WRC Question – How did the Gilpin Historical Society and the City of Central assist your project?

Eric – Dr. David Forsyth, director and curator of the Gilpin County Historical Society has in-depth knowledge of the society’s collection of photographs and was a great help in finding the specific imagery I was looking for. The City basically helped with securing the grant which was done via the Main Street Central commissions work as well as coordinating with the property owners to allow us access into their vacant buildings.

WRC Question – How did you become interested in the history of Central City?

Eric – When I moved to Central City in 1996, I rented a room in one of the town’s grand old homes and after settling in I found an old cigar box on the upper shelve of my closet. In that cigar box was a Rocky Mountain National Bank check from 1888 that captivated me, as did the old city I found myself living in. Long story short, from that point on I collected anything on paper that said Central City, Black Hawk, or was related to Gilpin County whether it was finding things at antique stores, online auctions, trading with other local collectors and or the occasional dumpster dive! 25 years later I’ve amassed a collection that contains a thousand of pieces of vintage ephemera, maps, blueprints, photographs, books, bottles, trinkets and everything in between. More importantly, I’ve amassed great joy and knowledge in doing so. Thanks to thank Lisa Roemhildt with the City of Central for her help in coordinating and securing the funding for the project as well as Jeremy Kaiser, Larry Joe Saenz, and the light of my life, Danae Beaudette, for their ingenuity and help installing the prints.

So, next time you’re strolling through downtown Central City, stop and check out all the historic photos in the store windows. Maybe someday soon they’ll all have small businesses occupying the store-front space or the entire building, but until then enjoy a glimpse of history!

END_OF_DOCUMENT_TOKEN_TO_BE_REPLACED

Benefitting the county, schools, and much more By Don Ireland   This year marks the 30th anniversary of casinos opening in the former little mining towns of Black Hawk, Central City and Cripple Creek, Colorado. In those early years, smoking was allowed inside ... END_OF_DOCUMENT_TOKEN_TO_BE_REPLACED