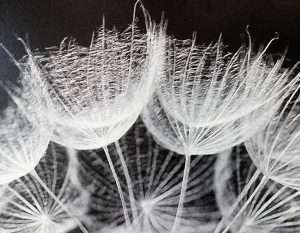 As the temperatures drop and the snow starts to fly, Gilpin County Arts Association (GCAA) wants to help you ease into the cold months with their new exhibit in the gallery above the Central City Visitor’s Center titled Spring into Winter. The exhibit features the exhilarating creations of three Colorado artists; Andi Sahlen in photography, Dan Fyles in water color, and Amelia Marlowe in crystalline pottery.

Marlowe lives in Grand Junction and has won several awards for her crystalline pottery. When pieces are fired, sometimes the glaze forms crystals which had long been considered defects. Amelia sees things differently and purposely produces the crystals in her work making them elegant and functional.

Andi Sahlen lives in Aurora and has been very active in the Aurora Artist Guild. Andi revels in taking photographs and playing with them to add her signature artistic effect. Some of her photos you would swear are paintings. She focuses on unusual or unfamiliar viewpoints of common natural things.

Dan Fyles also lives in Aurora and has won several awards in juried shows in multiple states. He graduated from the Colorado Institute of Art and spent several years as a commercial artist for local newspapers and publications. He took his experience and applied it with flair in water color mixed media paintings. Aesthetically pleasing and artistically excellent, his pieces would be a great addition to anyone’s collection.

The Spring into Winter exhibit is open for viewing during regular hours of the Visitor’s Center and will be on display through January 15, 2017. The GCAA would like to remind everyone that as always, all pieces on display are for sale. During the off season, just speak to the attendant downstairs if you would like to take home a great piece of art.

END_OF_DOCUMENT_TOKEN_TO_BE_REPLACED

Where the dead get to tell their story By Jaclyn Schrock On Saturday, August 21, the Gilpin Historical Society held their annual Cemetery Crawl. Tickets allowed the shuttle of hundreds of guests from the Teller House parking lot to the Cemetery. Depending on v... END_OF_DOCUMENT_TOKEN_TO_BE_REPLACED