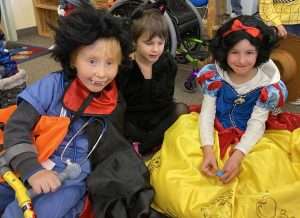 Get your fright on!

Gilpin School always celebrates Halloween in the most extravagant ways. Between the annual Halloween Carnival, Trick-or-Treat Street, Elementary Parade, and classroom parties everyone has a great time. This year’s festivities were especially buffoonery. Monsters and princesses walked the halls laughing all week, but the whole holiday began on Saturday, October 26, with the Annual Halloween Carnival.

During the carnival, pumpkin cut-outs and moving pictures lined the walls. Booths were set up throughout the gym with kids crowding around and playing everything from toilet paper toss to plancko. Downstairs, parents bid at the silent action and families scarfed down food provided by the PTA. Just down the hall Trick-or-Treat Street was in full bloom. People of all ages collected candy from friendly firemen and various volunteers. The night ended as the PTA and high school students vigorously cleaned up all the fun.

A few days passed before Halloween, the special day the entire student body was looking forward to. Elementary students brought costumes to school and hurriedly changed into them around 2:45 p.m. in anticipation for the annual Elementary parade. Meanwhile, in Mrs. Beth’s preschool, Mr. Worshinski, a retired Gilpin teacher, introduced the kids to his famous Halloween costume. He also explained that they would be leading the entire parade. The students all paraded down the hall as parents watched from the sidelines. Upon return to the classroom, students enjoyed a Halloween party with cupcakes and all sorts of treats. Kids went on to Trick-or-Treat later that night. Although candy was the main distraction on Monday, Gilpin schools wrapped up Halloween on a high note. Despite the occasional tricks, everything went smoothly.

END_OF_DOCUMENT_TOKEN_TO_BE_REPLACED

Where the dead get to tell their story By Jaclyn Schrock On Saturday, August 21, the Gilpin Historical Society held their annual Cemetery Crawl. Tickets allowed the shuttle of hundreds of guests from the Teller House parking lot to the Cemetery. Depending on v... END_OF_DOCUMENT_TOKEN_TO_BE_REPLACED

Benefitting the county, schools, and much more By Don Ireland   This year marks the 30th anniversary of casinos opening in the former little mining towns of Black Hawk, Central City and Cripple Creek, Colorado. In those early years, smoking was allowed inside ... END_OF_DOCUMENT_TOKEN_TO_BE_REPLACED