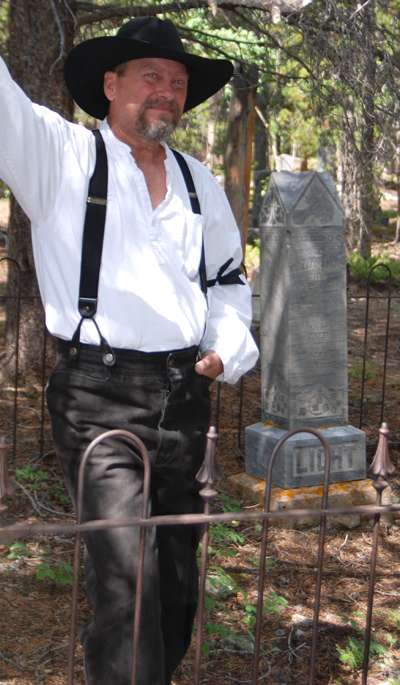 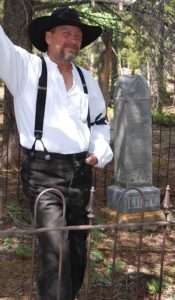 At the Bald Mountain Cemetery

The 27th Annual Cemetery Crawl took place at Bald Mountain Cemetery between Central City and Nevadaville last Saturday, August 22, 2015. This much-loved event is presented each year by the Gilpin Historical Society and precedes the Central City Beer Fest on Main Street. The event is put on to share our area’s rich history and to support the Gilpin Historical Society in their mission to preserve, promote and interpret Gilpin County’s history.

Over 100 adults and children entered the cemetery gates to hear the stories of ten “spirits” that appeared for the crawl. Most of these characters are buried at Bald Mountain Cemetery with the exception of a few visiting spirits that came to share their perspective of the area and to no doubt, catch up with some old friends from the late 1800s. Life was hard in the Wild West and spirits’ memories shed light on many of the obstacles.

William Light (1854-1891) shared his life as a hardworking log hauler who lived in Nevadaville with his wife and five children. Less than a week after his death, his wife also passed. An 1887 edition of The Weekly Register-Call reported that the five children were left destitute after the life insurance claim was denied. His corpse was even exhumed by the insurance company so the cause of death (kidney stones) could be determined.

The spirit of Agnes Gates (1900-1993) shared many memories from her long, full life. She helped to create the Gilpin Historical Society and started the Gilpin History Museum in Central City. This mother of five supported her children as an author of Western-themed romance stories and an avid pianist. She donned her skills as a pianist at the Glory Hole Bar in Central City. With a love for the arts and writing that started as a young child, her third husband was Frank “Pancho” Gates, a former technical director for the Central City Opera. Gates explained how Pancho would regularly take items from their home to use as props at the Opera like the drapes, rugs, vases, urns and even the wood stove.

The Spirit of Fred S. Bolsinger (1860-1912) was accompanied by current Colorado resident and grandson James Bolsinger. This German family lived in Nevadaville (Fred’s father founded the town in 1859) and several members have served in Colorado’s House of Representatives throughout the decades. Fred worked for an insurance company, Woodman of the World, and upon further questioning it was determined that he was not involved in the denial of Mr. Light’s claim. This father of nine became Sheriff of Gilpin County in 1910 and died a couple years later when he showed up quite ill-prepared to a gunfight donning a stick in hand.

Lovdy Davey (1862-1932) was born in England and had always dreamed of living in America’s Wild West. In 1882 she married her husband and set off for America in a ship across the Atlantic Ocean. The spirit described the journey as nothing short of a “rough trip” in her diary, until they arrived and continued to head west on a wagon train. The Davey’s settled in Nevadaville, a city of nearly 40,000 people at the time and bigger than Denver city. Lovdy’s best friend, Sarah C. Seymour, and her were known for their kindness and volunteerism in the community. Their friendship extended past death as the two purchased adjoining family plots at the Bald Mountain Cemetery.

Minnie Morgan (1890-1986) and her husband Walter moved to Central City in the 1930s. Walter was the general manager of The Weekly Register-Call. After he passed, Minnie worked as a clerk for the select service board while many of the nation’s men were away in the war. She was a member of the St. James Methodist Church and was an avid rock collector, with part of her collection covering the family plot. Minnie was dedicated to local history, having re-founded historic Washington Hall in Central City. She was known as the discoverer of Washington Hall since she uncovered the history showing where this influential building was located. The hall sported the first city hall, jail and courthouse. It now houses the gallery for the Gilpin Arts Association and tours by the Gilpin Historical Society, located across from the Opera and Teller Houses. Minnie authored a small booklet for Operagoers providing a walking tour of the area and its history called “A Historical Souvenir of Central City, Colorado” which was published by The Weekly Register-Call in the 1940s.

The spirit of Margaret “Peggy Ann” Trezise (1854-1934) arrived with her husband in Nevadaville on July 4, 1876. She explained their struggles, especially in having children. The pair had twelve children, of which only seven survived to adulthood. The cemetery was filled with the gravesites of children. Illnesses and plagues were the biggest killers of children in the 1800s and Peggy’s story of child loss was similar to many others.

A “cousin Jack” from Cornwall, England by the name of Frances E. Warren shared his life as a miner in the Colorado mountains. Many of the miners were referred to as cousin Jacks because when workers were asked where more help could be found for the mine, a more-than-common response was “I have a cousin back in England. If you pay for his passage here, he will prove to be a good hard worker for you.” These miners were well-educated and experienced in mining. They also brought their culture, food and superstitions with them. Cornish miners were responsible for helping lay the rock foundations still seen standing in Central City today. The “pastie” was a traditional potpie pastry that could be heated in the miner’s metal lunch box using a candle in the mine. These miners believed in Tommyknockers, little jokesters that lived in the mine who would warn if danger was present by knocking on the walls.

These are just a few of the mysterious histories of the people buried at Bald Mountain Cemetery. Regardless of stature, Nevadaville and Central City offered several opportunities for riches, adventure, danger and illness. Sickness took far more miners than any mining accidents ever did. The thin air at this high altitude made miners quite susceptible to pneumonia and respiratory complications.

The 27th Annual Cemetery Crawl was a great success. All the Spirits were represented by incredible volunteers who contribute countless hours to research and prepare for the event. Deb Wray organized the crawl this year and she noted she was “very proud of our volunteers, who always seem to save the day!”

You can support the Gilpin History Society through membership and donations. There are several properties in Central City where you can learn and experience the area’s rich history. Visit their website at www.gilpinhistory.org or call 303-582-5283 for more information. 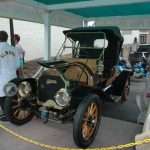 A Tailing Tale of Mining Books and Elmore
Next Article 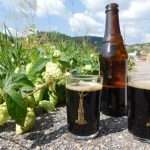