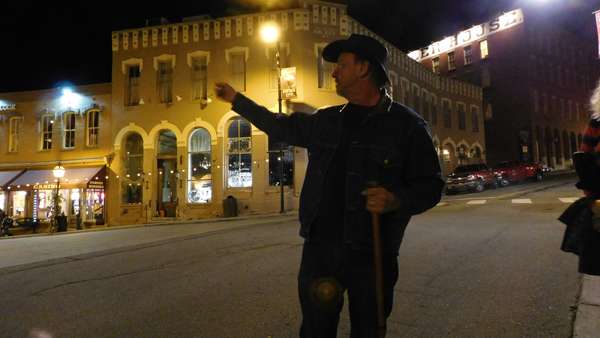 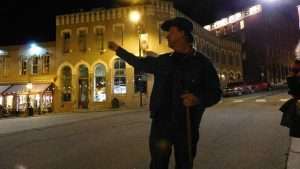 In the 10th Annual Creepy Crawl

The temperature drops, and clouds threaten as darkness descends upon the cobbled streets of Central City. When this happens in the weeks preceding All Hallows Eve, the spirits of long-dead citizens come back to tell their tales in the old, oft-times decrepit buildings they inhabit and 2018 is no exception. For the past ten years, the Central City Creepy Crawl has been held to entertain participants with true stories of the past, albeit embellished somewhat for theater.18

Inside the Central City Opera House, a single light burns continuously above the stage, while in the shadows of the auditorium, a train engineer from the old Golden Ralston Railroad confesses of the time he hit a man while running the train to Golden. They never found a body, just a hat with a feather and a collar with a ruby button. Sightings of a ghostly mauled man have been seen along Highway 93 ever since.

The Washington Hall Art Gallery normally stands silent during the winter, but this year art continues to hang on its walls; although perhaps the GCAA should rethink that idea since after hours, William Jefferson wanders around; looking, never touching. He can’t, you see, because he is in a strait jacket. William Jefferson, “An insane Colorado man from Gilpin County… was so violent that he had to be pinioned,” was incarcerated in the insane asylum in Pueblo, Colorado, in 1893, a time when very little attention, care, or funding was paid to institutions such as this. Many inmates/patients died and were buried in unmarked graves in one-size-fits-all pine boxes (some of them had to be folded to fit). Since then a prison has been built on the site and every time the excavate, they uncover more human remains.

The Williams Stables houses a theater in the round used by the Central City Opera and is also home to T.M. Ramsey, a Nevadaville businessman with a store in Dog Town, just east of Nevadaville. Ramsey’s neighbor grew concerned when he had not seen or heard from Ramsey in two days, so he called Sheriff Williams and they investigated the store. The door was not locked and when they went inside, the money box was empty, and T.M. Ramsey was slumped in the corner with his head bashed in. The murderer was never caught.

Coyote Creek Casino sits empty and abandoned on Eureka. Empty, that is, except in October when the spirit of Josette walks the building. Josette was murdered in that building and begins to haunt the place scaring away her windowed husband, Tom. Tom’s friend, Frank, moves in knowing what Tom had told him, but in disbelief, paid no attention. After three days, Frank is convinced Tom must have been going mad, but then on day four, he starts hearing a woman’s voice at night. After a few nights of hearing things and seeing a woman out of the corner of his eye who disappears when he tries to look straight at her, Frank starts sleeping downstairs in the hall. Josette is not satisfied and begins her tricks on the bottom floor telling Frank to go away. Frank eventually signs the deed over, hops a train to Denver, and is never seen from again.

Baby Doe’s Silver Dollar Casino once brought in heaps of money, which may be why former Gilpin County Treasurer Christopher Trezise chooses to hang around. Trezise was once the County Assessor, and then elected as the County Treasurer, but met an untimely end in 1908. Christopher was liked by many people and won his elections soundly. He was a boarder in the home of Addy Hicks, a comely woman with a 19-year-old daughter, Vera. Christopher fell in love with Addy, but his feelings were unrequited; however, Trezise was relentless. When Addy became engaged to a man from Boise, Idaho, Trezise was enraged with jealousy and attempted to force Addy to love him at gun point. Things went awry, and he accidentally shot Vera instead. Realizing what he had done, Christopher took his own life. Vera survived and lived a long life.

The Gilpin County Historical Society puts on the Creepy Crawls as an annual fundraiser, and this is the tenth year for the event. Dr. David Forsythe says he and Society President Deb Wray, “easily put in more than 100 hours” getting it all together. It is exhausting, but worth it. Each year presents new problems with actors moving away, medical issues taking out key people, and convincing property owners to use their buildings. This year’s show was positively received by the people on tour. Every ticket holder of age is given a voucher for a free beer at Dostal Alley as a thank you. The Creepy Crawl will be held again this coming Friday and Saturday, October 19 and 20, so there is still time to get in on the spooky action. 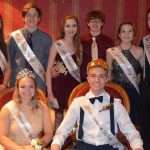 The parade, the dance, and the big game!
Leave a comment