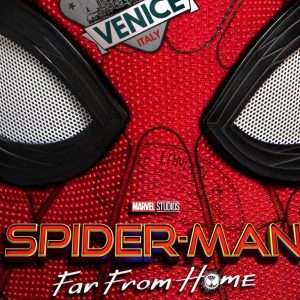 The final superhero comic book movie of 2019 (until October) opened July 2 concluding Phase Three of the Marvel Cinematic Universe. “Spider-Man: Far from Home” is a cooperative effort between Marvel Studios and Sony Pictures after Sony, who owns the rights to the Spider-Man character, allowed Marvel to use Peter Parker for a total of six movies. If you are not keeping track, this will be the fifth MCU movie the famous web-slinger has made an appearance. This movie’s release may be overshadowed by the towering hulk that is “Avengers: Endgame,” so it will need to be uniquely good to have any traction against the summer blockbusters. Before I accidentally reveal the secret identity of my rating, I’ll go over the plot; the good, and the bad.

Peter Parker, played by Tom Holland (“Avengers: Endgame,” “The Current War”), is still dusting off the adventures of his unintended trip to space and feeling very much alone in the superhero world, but is signed up for a summer trip to Europe with his school and intends to make the best of it. He intentionally leaves his Spidey-suit home hoping to enjoy the trip as an ordinary teenager. However, while in Venice, Italy, a water creature attacks the city and Peter finds himself helping an unexpected superhero to save the city. The other hero, dubbed “Mysterio,” played by Jake Gyllenhaal (“Nightcrawler,” “The Sisters Brothers”), by his classmates enlists Peter’s help in stopping the evil forces that not only attacked Venice, but also a small community in Mexico, with plans to attack in Prague, Czech Republic. Peter tries to turn down Mysterio’s offer, but when Nick Fury, played by Samuel L. Jackson (“Shaft,” “Glass”), steps in, Peter cannot avoid taking on his superhero role instead of enjoying his vacation.

CGI. The special effects are good, but not polished and there is too much reliance on computerized animation. Spider-Man is a down to earth type of hero; so, the quantity of animated effects made it feel more like a Doctor Strange film.

Plot. Unless you are new to the superhero genre, the plot is predictable to a fault. This did not take away from the enjoyment of the movie, but you sure don’t need much brain power to figure things out.

Characters. The school teacher chaperones are caricatures of bumbling, naïve adults that either don’t notice when things are awry or choosing not to notice. I believe they could have been written as more realistic people without effecting the rest of the movie; even adding to the threat of discovering Peter’s secret identity creating more tension in the plot.

Editing. Most of the editing in the movie is done well, but there is one time that the continuity of editing took me out of the movie for a moment which is after an intense battle, Peter is pretty banged up, but in the next scene (allegedly a short-time span), he appears perfectly fine. Perhaps it was an unusually long plane ride?

Characters. Mysterio is an intriguing character and natural evolution of villainy after the Thanos Blip (“Avengers: Infinity War” and “Avengers: Endgame”).

Music. Film score guru Michael Giacchino once again applies his talents to create a score uniquely Spider-man while weaving notes of Avengers and the original TV Show theme into the music.

Meaning. This story is a natural follow-up to “Avengers: Endgame” from a teenage perspective. Peter learns about himself and grows into a more mature responsibility of what he can do and what his limitations are. There is a great line reflective of modern society, “People need to believe. And nowadays, they’ll believe anything.”

Uniqueness. The feel of this movie is very different from other MCU movies. Director Jon Watts does a good job creating a unique feel and tone while staying true to the MCU.

This movie is a well-done, feel-good summer blockbuster. The kind of movie you wouldn’t mind seeing more than once. You should walk out of the theater feeling good about life and ready to tackle the obstacles of your own reality. The film has drama, tension, comedy, action, and romance all rolled into a great two hours. It is rated PG-13 for sci-fi action violence, some language and brief suggestive comments. The critiques I have are not enough to detract from the enjoyment of the film. On a scale of five, my remarkable daughter rates the film four and a half ghosted calls, my lovely wife rates it four and a half blips, and I rate it four night monkeys.

END_OF_DOCUMENT_TOKEN_TO_BE_REPLACED

Where the dead get to tell their story By Jaclyn Schrock On Saturday, August 21, the Gilpin Historical Society held their annual Cemetery Crawl. Tickets allowed the shuttle of hundreds of guests from the Teller House parking lot to the Cemetery. Depending on v... END_OF_DOCUMENT_TOKEN_TO_BE_REPLACED

Where the dead get to tell their story By Jaclyn Schrock On Saturday, August 21, the Gilpin Historical Society held their annual Cemetery Crawl. Tickets allowed the shuttle of hundreds of guests from the Teller House parking lot to the Cemetery. Depending on v... END_OF_DOCUMENT_TOKEN_TO_BE_REPLACED