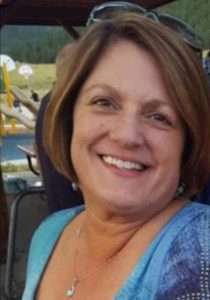 “I’ve had a great career!” says Central City Postmaster Patti Sprague, who will be retiring on May 24 after a 14-year stint serving at the 80427 zip code. Patti’s customers feel the same about her and will miss seeing her smiling face. The regulars enjoy talking with her, sharing their news, and using the post office as a social hub.

This reporter sat down with Patti as she described her life’s route to becoming Central City’s postmaster.

She was born in Phoenix but moved to Arkansas at age seven, where she was raised on a farm in tiny, sweet-sounding Strawberry. She graduated from Strawberry High School.

She was first employed by the postal service at age 22 in Batesville, Arkansas as a distribution window clerk. After eight years, she was promoted to the postmaster’s position in Cord, where she served for four years. Patti then worked at the larger office in Smithville for nine years. In 2005, following her marriage to husband Rick, she came to Central City. In all, she has been employed with the U.S. Postal Service for 34 years.

Interestingly, Rick also served as a postmaster in Dillon and in Empire. In fact, the couple got acquainted at a conference of the National League of Postmasters when she was secretary-treasurer of the Arkansas branch of that organization and Rick was president of the Colorado-Wyoming branch.

“We met in Washington, DC and kept meeting at conventions!” she chuckles.

The pair was married in January 2005 in a wedding chapel in Las Vegas. Each of them has two grown children from previous marriages, and they have five grandchildren.

Patti recounts the providential nature of her coming to the Central City Post Office.

“The previous postmaster, Maureen Ellsworth, retired in 2005, and this position opened,” Patti says. “I transferred here from Arkansas. The timing was just right.”

Patti and Rick live in Empire. Rick retired eight years ago after 20 years as Empire’s postmaster. He now serves as the town’s mayor.

“I guess that makes me Empire’s first lady,” she notes.

In the Central City Post Office lobby, all is neat and orderly, with rows of post office boxes and notices posted squarely on the wall. Patti allowed me in her work area behind the scenes, which is quite a contrast. In fact, it looks a bit like the jumbled underside of an embroidered towel. The backs of the P.O. boxes are stuffed with mail, boxes and trays are stacked on the floor, and messages and supplies litter the tables. But, like the top of the embroidered design, there is a method to it, and Patti is efficient in all her duties.

“In a small office, the postmaster has to do everything. Mail comes from a district office in Denver, all sorted by machine, but some has to be manually sorted. Starting at about 8:00 a.m., we sort the mail that’s in bags and trays and do all the P.O. box deliveries, which is the only kind of deliveries we do. We have about 700 customers. That takes till about 10:30.”

She also waits on customers at the often-busy window, answers the phone, orders supplies and stamps, and pays the bills.

She had two clerks, both of whom recently quit, so she has been doing most everything on her own for the past month. A certified interviewer will soon be conducting interviews with applicants, and Patti will participate in the selection process. No successor has been chosen yet for her own position. She does note that the only employee she currently has is Deb Fischer, the faithful cleaning contractor for the past 11 years.

While in Arkansas, Patti was a trainer, transfer official, route inspector, and member of the cultural diversity team.

Interacting with her customers is the best part of her job, though.

“As a postmaster, I wasn’t allowed to serve for more than 15 hours a week at the window, but with no clerks right now, I have been able to reconnect with my customers,” she relates. “I will really miss the bonds I have formed with them.”

Sometimes, the postmaster or a clerk is the only person an elderly customer will speak to all day, especially if they have no family.

“They can have a daily connection more with us than with others in the community. Sometimes they just want to talk, and I talk with them even though I have work to do, because they need that. If I don’t see them for a few days, I call and have an officer do a welfare check,” she advises.

The post office also distributes mail to those camping at the KOA during the summer on a general delivery basis.

“We’ve built a rapport with those who return year after year; some of them even send us postcards from other places they go!”

Patti provided a bit of our area’s postal history. The post office was originally established here in January 1860, serving Mountain City when the area was part of Arapahoe County in Kansas Territory. In August 1860, this locale became part of Colorado Territory. It became Gilpin County in 1865 and was then changed to Central City on October 8, 1869. Patti Sprague has had the longest tenure of any woman postmaster here and the second longest of any postmaster, serving for 14 years. Max T. Robb served 21 years, from 1957-1978.

Patti recalls a few changes in the postal service over the years. When she first started in 1985, a postage stamp cost 22 cents. Now, a stamp is 55 cents. Everything was done manually, but automation arrived with the introduction of the IRT (Integrated Retail Terminal) machines in the 1980’s. Those were the forerunners of the machines customers see at the counter today that display the price of postage on a package, its destination, and the like.

After the terror attacks on September 11, 2001, aviation security measures became part of daily operations for the postal service. Clerks began having to ask customers, “Is there anything fragile, liquid, perishable, or potentially hazardous in your package?” The reason these very important questions are asked, Patti explains, is that priority packages go on commercial airlines.

The Spragues plan to travel in retirement. They recently sold the house they built in Empire and are now renting and taking care of a home and adjacent cabin for some snowbird friends. The friends will be returning next month, so Patti and Rick are moving back into their fifth-wheeler.

“We’ll camp around Colorado this summer, then go back to Arkansas as our home base. We also have two grandchildren in Colorado City near Pueblo, so we’ll get to visit with them,” she says enthusiastically.

Patti is also anticipating a trip to Hawaii next January. “My husband was there once in the military, but I’ve never been there. I also have a daughter in Maryland, and we hope to visit her this fall.”

In this age when people often communicate through impersonal electronic methods, it is sometimes good to connect face-to-face with a human being. When that person is Patti Sprague, the kind and caring lady in charge of distributing good old-fashioned snail mail, even the junk mail and bills are more of a special delivery.

We thank her for her many years of service to Central City and wish her a happy and blessed retirement!

END_OF_DOCUMENT_TOKEN_TO_BE_REPLACED

Benefitting the county, schools, and much more By Don Ireland   This year marks the 30th anniversary of casinos opening in the former little mining towns of Black Hawk, Central City and Cripple Creek, Colorado. In those early years, smoking was allowed inside ... END_OF_DOCUMENT_TOKEN_TO_BE_REPLACED

Benefitting the county, schools, and much more By Don Ireland   This year marks the 30th anniversary of casinos opening in the former little mining towns of Black Hawk, Central City and Cripple Creek, Colorado. In those early years, smoking was allowed inside ... END_OF_DOCUMENT_TOKEN_TO_BE_REPLACED