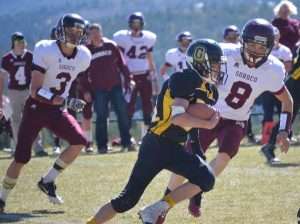 The Gilpin H.S. Eagles football squad was close to pulling off a win against the Soroco Rams last Saturday, October 8. But as they say, “close only counts in horseshoes and hand grenades.” Dreams of victory blew up in a disappointing 20-14 overtime loss, but the Eagles made their stronger competitors work for every point.

Gilpin’s Head Coach Craig Ball remarked, “When you play a top 10 team, you need to keep the game close. We did that with great determination and grit and fought them to a 14-14 tie at the end of regulation. This Gilpin football team battles for every yard on that field, and I’m very proud of them.”

Gilpin was first to receive, and the Eagles’ #26 Matthew Immordino ran in a touchdown less than three minutes into the game. The 2-point conversion attempt was no good. Gilpin kicked off to Soroco, who picked up the ball at the 4-yard line and ran into the end zone, but flags on the play revealed illegal blocking on the part of the Rams and a sideline violation by the Eagles, so no score for Soroco.

The next points for Gilpin came when #19 Austin Boulter ran in a TD with 1:25 left in the first quarter, and Immordino attempted the conversion. A penalty against the Eagles pushed them back to the 14-yard line. #21 Jack Ball made good on the conversion, and the score was 14-0 Gilpin.

Eagles’ highlights of the second quarter included a pass interception as well as a blocked pass by #8 Braedyn Perez. On a Soroco possession, the Rams sprinted for a 77-yard touchdown and brought the score to 14-6. The 2-point conversion attempt failed, however. With less than a minute to go in the half, Soroco intercepted an Eagles pass, bringing the play to the 10-yard line. Soroco threw 2 incomplete passes into the end zone.

The Eagles were hurt by errors in the second half and remained unable to score. In the third quarter, the Rams made good on a bid for the end zone and a 2-point conversion, which tied the score at 14-14.

The teams held each other from scoring during the fourth quarter. The refs were kept busy handing out penalties to both teams, including delay of game, false start, and unsportsmanlike conduct. As the quarter drew to a close, the Rams were on third down with 25 yards to go and tried a pass that was blocked by #2 Eryk Lorenz. On fourth down, Immordino tackled the Ram player just short of a first down, and the ball was turned over to the Eagles with 7 seconds to go in regulation play. The clock ran out as Gilpin moved toward the goal line.

Overtime went quickly. Gilpin’s tries for a touchdown were thwarted, and possession was turned over to Soroco. The Rams completed a pass and ran it in to the end zone to beat the Eagles 20-14.

#50 Jaime Alexander was selected as Player of the Game for Gilpin, with 11 total tackles, including 3 for a loss of 16 yards, 1 hurry of the quarterback, and 1 fumble recovery.

Gilpin’s varsity had a tough week, going down in defeat to three strong rivals in away league games.

The Gilpin Eagles met their third Eagles opponent in the past two weeks as they battled against the Heritage Christian Eagles (HC) of Ft. Collins on Tuesday, October 4. HC came away with a 3-1 win. Gilpin’s season record is now 8-8 overall and 3-5 in league play. HC stands at 10-4 overall and 4-2 in league games.

On Thursday, October 6, Gilpin clashed with the Union Colony Prep Timberwolves (UCP) at Greeley, coming away with a 3-0 loss again. UCP has a 10-5 overall record, 4-3 record for conference play.

Alex Martin and Jessica Wilhelm led the Eagles with 6 kills each; Kasen Nelson contributed 3, for a total of 15 for the team. UCP had 27 kills total. Gilpin’s Bailey Hobson-Kroll and Wilhelm each served up 1 ace, while UCP had 6 aces. UCP was superior in blocking with 19 solo blocks and 3 assisted blocks. Gilpin had 1 solo block. Aspen Nadeau was tops in digs for Gilpin with 20 of the team’s total of 54. UCP hit 73 digs. Cicely Lepro helped the Eagles with 14 ball handling assists, while UCP competed with 26. Finally, Gilpin received a total of 57 serves – 27 by Nadeau and 18 by Martin. UCP received 51.

Martin and Wilhelm were first in kills for the Eagles with 11 and 9, respectively; the team had a total of 27. Kiowa had 47 kills. A trio of Courtney Holmes, Martin, and Hobson-Kroll each slammed 2 serving aces to add to Gilpin’s total of 9. Kiowa batted 13 aces. Gilpin improved their blocking record with 4 solo blocks by Wilhelm and 1 by Nicole Adams. Kiowa had 2 solo blocks. Both teams excelled in digs: Gilpin hit an amazing 92, with three players getting double digits, but Kiowa surpassed that with 100. Lepro had 22 ball handling assists; Kiowa managed a total of 44. Gilpin received a total of 79 serves, 28 by Nadeau, 24 by Martin, and 13 by Holmes. Kiowa had 66 serves received.

END_OF_DOCUMENT_TOKEN_TO_BE_REPLACED

Benefitting the county, schools, and much more By Don Ireland   This year marks the 30th anniversary of casinos opening in the former little mining towns of Black Hawk, Central City and Cripple Creek, Colorado. In those early years, smoking was allowed inside ... END_OF_DOCUMENT_TOKEN_TO_BE_REPLACED

Where the dead get to tell their story By Jaclyn Schrock On Saturday, August 21, the Gilpin Historical Society held their annual Cemetery Crawl. Tickets allowed the shuttle of hundreds of guests from the Teller House parking lot to the Cemetery. Depending on v... END_OF_DOCUMENT_TOKEN_TO_BE_REPLACED