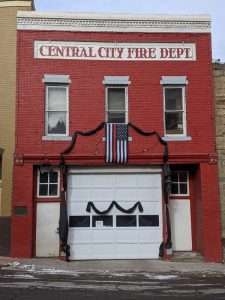 Council met with Staff at 5:00pm for a work session prior to the regular meeting. The topic of discussion was an overview of Ordinance 20-13 which adjusts the sales and use tax code.

Mayor Fey asked for a full minute of silence in honor of the passing of Cody and Shelby Allen, two firefighters who served the community in many ways, not the least of which was with the Central City Fire Department. Memorial Services will be held Friday, December 18 with an honor parade from the church in the metro area to the Gilpin County Fairgrounds.

The Mayor called for a motion to approve the consent agenda which consisted of the minutes from the December 1 meeting and regular bill lists through December 1; and the approval of the City Manager Employment Agreement. The City Manager’s agreement includes a 2.2% cost of living increase with a total salary of $136,742.34. Alderwoman Laratta moved to approve the Consent Agenda and was seconded by Alderman Aiken and Alderwoman Johnson simultaneously. The motion passed unanimously.

Mayor Fey opened the floor to the public for anyone who wished to speak to a topic on that night’s agenda. No one chose to address council.

The Council heard annual reports from three organizations and considered approval on one Historic Preservation agreement, eight Resolutions and two Ordinances. All Resolutions are considered housekeeping items as they are renewing pre-existing contracts for the coming year. The annual reports are available to the public as part of the packet for tonight’s meeting and can be found on the City’s website.

Scott Dessens, CFO of the Central City Opera and Eric Chinn, Director of Historic Properties, presented their annual report. Alderwoman Laratta commented, “It has been totally delightful seeing some work done on the outside of these houses.”

Eric Miller, President of the Gilpin County Arts Association presented their annual report. One highlight from the report is that they will be hosting the Watercolor Artists Jury Show in March 2021. Mayor Fey commented that their cooperation with the Central City Opera has been a wonderful development in the last few years.

Deb Wray, President of Gilpin History presented their annual report. Gilpin History has been hit hard by the pandemic restrictions limiting their ability to conduct tours and hold annual events. They are optimistic about the coming year.

Lindsey Flewelling presented an agreement for historic preservation with the Arapahoe and Roosevelt National Forest. This agreement clarifies the relationship and communication between federal agencies and the City when intervention is taken due to emergencies and disasters such as wildfire and flood especially to historic places and properties. There is no action to take on this item.

A Future for Vacant Properties

Historic Preservation and Code Enforcement Officer Lindsey Flewelling introduced Resolution 20-48 which would support economic development efforts in Gilpin County. This supports the County’s efforts to revitalize and repopulate the vacant commercial properties in the County through the incentive of C-PACE (Colorado Commercial Property Assessed Clean Energy). Approval of this Resolution has no fiscal impacts for the City.

Mayor Fey asked why the City would pass a Resolution prior to the County making a decision. Director Rears responded that this Resolution would be another tool they could leverage for money for the City. Passage would encourage the County that this could be an option for them. Joe Behm, Executive Director of the Business Improvement District commented that this looks like another excellent opportunity for the City and an “arrow in the quiver.”

Alderwoman Laratta moved to approve Resolution 20-48 and was seconded by Alderman Aiken. The Resolution passed unanimously.

Public Works Director Sam Hoover introduced Resolution 20-49 which would approve an extension of an agreement with One Way, Incorporated for residential trash disposal services. The City has contracted with One Way for the past ten years. The cost of this agreement is $72,120 which represents an increase of just under three percent over 2020. Alderman Hidahl commented that there was no provision for recycling. During budget meetings, Hidahl suggested they added recycling to the agreement. “Why we live in a world we insist on trashing, I don’t understand,” said Hidahl.

Professionally Planning on Building and Inspecting

Alderman Aiken moved to approve Resolution 20-50 and was seconded by Alderwoman Laratta. The Resolution passed unanimously.

Unzipping an IT Service

Alderman Aiken moved to approve Resolution 20-51 and was seconded by Alderwoman Laratta. The Resolution passed unanimously.

Young and the Parkway

Director Rears introduced Resolution 20-52 which would approve an easement agreement in extraordinary circumstances along the Central City Parkway for operation, maintenance, and repair and authorize the mayor to execute the agreements on behalf of the City of Central. Owner of much of the adjoining property to the Central City Parkway, Robert Young, is working with the City allow access to his property for maintenance or emergency issues prior to procuring his permission. Director Rears referred to this as a “good neighbor agreement.”

Alderwoman Laratta moved to approve Resolution 20-52 and was seconded by Alderman Aiken. The Resolution passed unanimously.

Director Rears introduced Resolution 20-53 which would approve an agreement for the form of trails and boundary fencing and authorize the mayor to execute the agreements on behalf of the City of Central. This Resolution would form and define the easements to facilitate future trail development, especially bordering land along the Robert Young properties near the Central City Parkway and Russell Gulch and would ensure fencing would be continuous in consideration of cattle on the property.

Alderman Aiken moved to approve Resolution 20-54 and was seconded by Alderwoman Laratta. The Resolution passed unanimously.

Sales and Use Tax Updated

City Attorney Marcus McAskin reviewed the second reading of Ordinance 20-13 which would repeal and reenact Article III of Chapter 4 of the City Code regarding Sales and Use Taxes.

Mayor Fey opened the public forum for the Ordinance and no one chose to address council. Alderwoman Laratta commented that she would love to see a freeze on those taxes for one year.

Alderwoman Laratta moved to approve Ordinance 20-13 and was seconded by Alderwoman Johnson. The Ordinance passed unanimously.

Betting on the Odds

Attorney McAskin reviewed the second reading of Ordinance 20-14 which would amend Chapter One of the Municipal Code by adding a new Article VIII regarding limited gaming to implement the voter approved Amendment 77. The changes made by this Ordinance are bound by the State passed Amendment and will not be effective until May 1, 2021.

Mayor Fey opened the public forum for the Ordinance and no one chose to address council.

Alderwoman Laratta moved to approve Ordinance 20-14 and was seconded by Alderman Aiken. The Ordinance passed unanimously.

Manager Miera stated that their packets include information about the memorial service for Cody and Shelby Allen. A procession will take place from Flatirons Church up the Central City Parkway and through Central City on Lawrence Street (in the opposite direction of traffic) and then on up to the Gilpin County Fairgrounds. There will be temporary closures to facilitate that.

Director Rears had confirmation from Xcel Energy of their commitment to provide 250 carbon monoxide detectors for the City to distribute. Additionally, the Gilpin County Food Bank and Nederland Food Pantry are receiving an anonymous donation of 200 CO detectors and they will be handing those out as late as next Tuesday, December 22, 2020.

Alderwoman Laratta exclaimed, “Merry Christmas and Happy New Year to everybody. And that next can’t possibly be worse. Keep smiling; our City looks beautiful and we’re still alive.”

Alderman Aiken asked people to not be complacent about mask use and hand washing. “It’s not something to take lightly.”

Alderwoman Johnson commented that this is still the season of love, joy and peace. Please share these attributes even in the light of tragedy.

Mayor Fey commented that this has been an “incredibly tough year on many levels” and thanked the City Staff and the members of the community for sticking through it. He encouraged people to find a cause to volunteer. He helped with the food distribution at Gold Mountain Village with the Food Bank of the Rockies and it was a profound experience. He then pledged, as tears fell from his eyes, to honor the spirit of Cody and Shelby Allen and never let their spirit to leave the community. He then recommended that the street in front of the firehouse be renamed in their honor.

Mayor Fey opened the floor to the public for anyone who wished to speak to the council on any items not on the agenda. No one chose to address the Council at this time.

Mayor Fey adjourned the regular meeting at 9:19 pm. The next regular Council Meeting will be next year, Tuesday, January 5, 2021.

END_OF_DOCUMENT_TOKEN_TO_BE_REPLACED

Benefitting the county, schools, and much more By Don Ireland   This year marks the 30th anniversary of casinos opening in the former little mining towns of Black Hawk, Central City and Cripple Creek, Colorado. In those early years, smoking was allowed inside ... END_OF_DOCUMENT_TOKEN_TO_BE_REPLACED