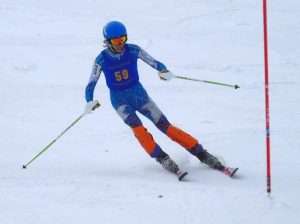 The weather in Steamboat Springs February 23 and 24 proved challenging for the high school skiers competing in the state championship. It was cold, snowy and icy with periods of wind.

Wes Davies of the Golddiggers took home the 5th place award in the state-wide skimeister competition and Coach Conradt Fredell was presented with the Alpine Coach of the Year Award. Fredell plans to retire after this season, so the 36 years makes it the longest any coach has served at the high school level.

Seniors participating in the state meet were given special recognition and Sam Snyder was joined by team members Col Koepsel, Annaliese Gould, and Zach Schell in this honor.