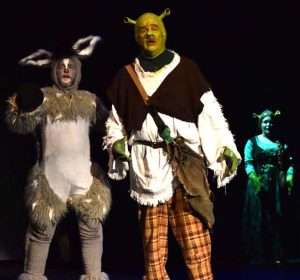 Presented by Peak to Peak Players at Gilpin School

Peak to Peak Players put on one “Shrektacular” show with their performance of Shrek the Musical that ran from July 26th-28th and to the first weekend in August at Gilpin County School. It was show for all ages to laugh, dance and even sing along with.

Shrek the Musical was directed by Ed Schoenradt who said, “This production started out with 30 people, some knew each other some did not. After months of rehearsals we are a family.” You could sense that feeling throughout the entirety of the show as the actors were so comfortable with each other on stage that they made the audience feel like their family too.

“We had people in this production from Aurora, Arvada, Denver, Bailey, Nederland, Central City and Genesee. We reached out to people from all over some of who had hardly stepped on stage, but once they did it was magic. This is theater at its finest” said Ed, “with the diversity and age ranges of actors coming from all over Colorado.”

Peak to Peak Players really is a local theater gem at its finest as the production was set to make the audience feel warm inside at the end of the show as Shrek, played by Dr. Charles Smith, Fiona, played by Angela Hunt from 7/26-28th then Jacquelyn O’Brien from 8/2-3,  live happily ever after. Who could forget the ending musical number of “I’m a Believer” when the cast ran through the audience celebrating the happy ending for the two main characters and the disappearance of their ruler Farqaud played by David Josselyn who got chased off by a dragon.

“We want to thank all the parents of these talented actors to the volunteers who helped build sets and to local companies such as JQK Barbeque for hosting auditions and to Dr. Dave McKenzie and Gilpin County School.”

Peak to Peak players is planning their show of Willy Wonka Jr. in November. To stay updated with upcoming shows and announcements regarding Peak to Peak Players, visit their website at www.PeaktoPeakPlayers.com.

END_OF_DOCUMENT_TOKEN_TO_BE_REPLACED

Where the dead get to tell their story By Jaclyn Schrock On Saturday, August 21, the Gilpin Historical Society held their annual Cemetery Crawl. Tickets allowed the shuttle of hundreds of guests from the Teller House parking lot to the Cemetery. Depending on v... END_OF_DOCUMENT_TOKEN_TO_BE_REPLACED