Shooting range locations is a hot topic in Gilpin 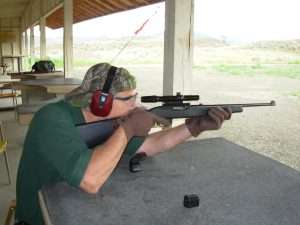 On July 24th, “Coffee with Commissioners” was held at the Community Center. About 60 residents attended the meeting. Commissioner Gail Watson, District 3, and Commissioner Buddy Schmalz, District 1, were in attendance along with County Planner Ray Rears and Sheriff Bruce Hartman. Commissioner Watson explained that the County had joined Northern Front Range Recreational Sport Shooting Management Partnership because of reports of shooting problems. “The purpose of the Partnership was to develop a landscape-level, multi-jurisdictional strategy to provide safe, responsible and accessible recreational sport shooting opportunities while addressing conflicts near residential areas and with other recreation users across the northern Colorado Front Range,” Watson explained. “I have met with shooters and non-shooters who all addressed the number one issue of safety.”

Gilpin has recreational shooters, both county residents and individuals coming up from the Front Range, that use public Forest Service lands to target practice. While most shooters are courteous, safe and clean up after themselves, others do not partake of these desirable practices. Problems arise when residents are annoyed by the noise created by target shooters, and spent shells and trash left behind are unsightly. Safety becomes a huge concern for both parties.

According to Hartman, his office has had 55 calls for service for target shooters so far this year. However, of those 55, only one resulted in a summons being written. “Most shooters are responsible,” Hartman reported.

Hartman explained that there are Forest Service regulations for target shooting and State statutes for unsafe shooting. However, his deputies are not able to enforce Forest Regulations on Forest Service land (only Forest Service rangers are.) These regulations include the use of approved targets such as cardboard, paper, manufactured metallic targets, and clay targets (no exploding targets), following fundamental firearm safety rules, and not shooting in specifically closed shooting areas in any of the Ranger Districts. Shooters must also be at least 150 yards from any residence, building, campsite, developed recreation area or occupied area and cannot shoot across a road or adjacent body of water. Shooters are not allowed to use tracer bullets or incendiary ammunition. All targets must have a safe backstop (one that will stop a bullet.)

State misdemeanor charges that Hartman and his deputies can enforce include shooting across the roadway, reckless endangerment, and unlawful conduct on public property. “A safe and adequate back stop is first criteria,” Sheriff Hartman noted, “Beer cans hanging on an aspen branch is not safe.”

Hartman also noted that it is extremely difficult to write a summons based on the county’s new ordinance, Resolution #13-24 passed last December. He states that a projectile has to leave the shooter’s property before the ordinance can be used to write a summons. “We have better state laws to write instead of the county ordinance,” Hartman said. Watson noted that this was the most the county could write for an ordinance according to state statute.

Watson stated to the crowd that this is not a public hearing, but a public meeting where the commissioners sought to glean opinions from the public. She said this was also an act of transparency where the Commissioners desired that the public understand the process. All the sites selected thus far are on public land, either Forest Service or State land, according to Watson. She said the county therefore has no jurisdiction and can only give input on the selection process.

–½ mile from any subdivision or town site

–¼ mile from any single home

–¼ mile from any recreational development such as trails, campgrounds, etc.

–¼ mile from any communication tower

–Land slope less than 10% as measured in tiers

The site selection secondary phase then narrowed down the field by looking at:

–Number of owners/parcels (preferring to deal with one owner, one parcel)

–Willingness of the owner to develop the parcel

Phase two of the process produced the following locations up for consideration:

–Tacoma – located in the Boulder Ranger District off Tolland Road

Phase three will look at twenty-two other criteria, including safety, ADA accessibility, and developmental impacts such as sound, parking, and environmental considerations. Another consideration during phase three is long-term management and enforcement of the site.

Commissioners intend to secure grants from Colorado Parks and Wildlife to help partially fund the shooting range. Hunting and fishing licenses purchased through the State fund such grants. The new Baker Draw Designated Shooting area on the Pawnee National Grassland was partially funded in this manner. It, too, was the solution sought as a result of problem shooters and shooting-related complaints.

Large pieces of paper hung on the Community Center meeting room with the names of each sight written on it as well as a map of each location. Each paper had “pros” and “cons” written on it, and Commissioners had requested that participants give their suggestions under those headings for each site. Commissioners said they would take the suggestions written on those papers into account through the next phase of the planning process.

The room was heavily populated with residents from the South Beaver Creek Corridor who were there in opposition of the Emory site. A loud cheer came from the crowd when Commissioner Watson announced that she herself was removing the Emory site from the selection list due to the negative feedback received from residents.

Public comment came from all sides of the range, so to speak. One participant stated that it “defies logic that people who are shooting illegal are not going to stop doing illegal things even if you build a range.” Still another participant said, “You do not get to misbehave in a shooting range because other shooters don’t tolerate bad behavior.” A comment was made, and supported by many in the room, that the ¼ mile standoff required in phase one was not far enough, even though the ¼ mile requirement far surpasses the National Forest’s requirement of only 150 yards.

One participant asked Hartman if he thought his office would get more calls if there was a range. Hartman responded, “We will have less (calls) if they know where to go. If we can funnel them to a safe environment, our calls overall will go down.”

More information regarding the Northern Front Range Recreational Sport Shooting Management Partnership can be obtained at their website at http://www.sportshootingpartners.org.

Caption: County Planner Ray Rears (standing, left) discusses the site selection phases with an audience of approximately 60 people at a recent “Coffee with Commissioners” meeting on the County’s pursuit of a new shooting range.

END_OF_DOCUMENT_TOKEN_TO_BE_REPLACED

Benefitting the county, schools, and much more By Don Ireland   This year marks the 30th anniversary of casinos opening in the former little mining towns of Black Hawk, Central City and Cripple Creek, Colorado. In those early years, smoking was allowed inside ... END_OF_DOCUMENT_TOKEN_TO_BE_REPLACED