Shoot-outs on Main Street in Nevadaville! 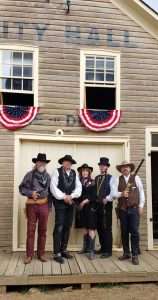 Nevadaville may be considered a ghost town, but those are not ghosts who live there and keep its recollections alive. Real people have brought back to us, with much restoration work, the Nevadaville Masonic Lodge No. 4 completed in 1879 on Main Street, across from the original City Hall. With improvements to the building in the last few years, the continuing members have had an annual fund raising pancake breakfast. Originally the event was held the first weekend after Mother’s Day, but with years of weather challenges on the unpaved road from the Central City Parkway, it was changed to July 14th for this year’s festivities.

This year’s pancake breakfast, served from 9 a.m. – 2 p.m., included a menu that included a berry mix, beverages, pancakes, eggs and sausage links in the main floor on red checkered table cloths covering large tables with folding wooden chairs. The front board walk deck had an old mountain man displaying two black powder guns, with one on his hip, as well. There were many other trinkets of a mountain man’s life on a table.

If the “shoot-out” on the rutted dirt road were ghosts in old west clothing and firing off noisy pistols, they may have been able to get up again without being hurt by real gun fire. As it was, the Central City Wild Bunch came for the annual pancake breakfast on Sunday to re-enact what we remember from days gone by, when Nevadaville’s Masonic Lodge served the many miners in the late 1800’s and early 1900s.

The Central City Wild Bunch of the Gilpin Historical Society did fire off blank shots at the 10 a.m. show, and then somehow miraculously recovered from their mortal wounds and got up to do the show again at noon. The show’s story line is often motivated by the thrills of the old west movies, which dramatized folk tales, books, and newspaper stories, real or imagined. In the second show, Wild Bunch hard-luck guys annoyingly interrupted (characterized by Tom Matthews’s) Central City undertaker Ed Harris’s attempts to tell local history, the way it was.

The re-enactment group performed between the old Nevadaville City Hall and the Masonic Temple next door to the old saloon turned livery stable, turned museum/ home. The City Marshal produced a wanted poster for a obnoxious gun-toting Gilpin man.

Before the Wild Bunch’s City Marshal produced a wanted poster for the bad guys, the group had been introduced with their current names and detail of some upcoming events given. Back into character, the wanted poster was disregarded, and shot right through! So no handcuffs and quietly being taken to the Nevadaville Jail occurred. Instead, two bad guys played dead in the dirt as gunfire filled the street in front of the Nevada Lodge.

By noon, extra folks dressed in Victorian attire were there for the Wild Bunch Shoot out. A crowd from the St. James Methodist Church in Central City arrived after Sunday morning services. This 2019 St. James celebration recognized the 160st year of Christian services, the oldest continual congregational meeting in the state of Colorado. In memory of those who founded and maintained the church, many join in the festivities wearing the old Victorian clothes. Some celebrated after service at the Teller House, and others came to Nevadaville Masonic Temple for their annual pancake breakfast/ lunch, both places being established about the same time as St. James Church.

Many gold rush towns erupted upstream after John Gregory first found gold (1859) in what became Mountain City, between the soon to be developed towns of Black Hawk and Central City. A short three miles uphill, the town of Nevada, Colorado (1860s-70s then later called Nevadaville) grew from miners arriving to prospect.  Nevada, CO was set up as a town site three weeks after Gregory’s gold discovery as one of many neighboring communities of predominantly immigrant Irish or Welch seeking their fortune in gold mining, surrounding what became known as the richest square mile.

As a dangerous Wild West mining community needing a sense of security for life and death, various men’s fraternal organizations were common to bring lives unity, comradery and death benefits for members, as few had life insurance. The Nevada Masonic Lodge #36 A.F. & A.M formed when this area was Kansas Territory, granted dispensations by Grand Lodge of Kansas.

The Nevada Lodge #4 originally met in an upper room of the Ira H. Morton building in Nevada City. Sadly, much of the town burned in September 1861. Soon after the fire, the lodge purchased two lots on Main Street (now 1430 Nevadaville Road). The new brick building was completed in 1879 for $7,140 as credited to M. S, Bruhans as the contractor. Wikipedia suggests that after Leadville’s gold boom around 1900, many miners moved away from Gilpin County so that by World War II, Nevadaville was nearly a ghost town. Lodge #4 members abandoned the building to meet with the Central City Mason’s until 1965 when they began meeting in Nevadaville again to raise money for the building’s restoration. The last few years has completed enough work to host the annual breakfast.

The lot where the former Nevada Masonic Lodge had met was also purchased by the Freemasons after the fire. Once the new building on Mains Street was completed, the original lot housed another fraternal organization formed in North American in the early 1800s, the Order of Red Men. The ORM for white men, not American Indians, assumed to practice Native American rituals as they understood them at the time.

The new Masonic Lodge building had shop space on the main floor (meat market, barber shop) while the upper level had a large 22 foot by 45 foot lodge room. There were other rooms for preparations, office, and sleeping quarters. The outside was load-bearing stone and brick, with cast iron pillars for the storefront.

The restored room looks more like a museum with memorabilia, posters, photos and upholstered furniture for small group meetings in the center of the room.

After breakfast, folks were able to tour the building’s restoration with appreciation of the work well done. Many also found historic items of interest in the museum next door to the Masonic Lodge.

The Wild Bunch also performed in three more shows in Morrison the following Saturday, July 20th. The Town of Morrison was thrilled to welcome back home Marshal Glass (Jonas Schrock III)  who had grown up there with his dad as the lone town cop (1960’s). Granddad Schrock, after serving in the Civil War, pioneered to the Morrison area in 1874, so he helped grow the town. He provided railroads with timber and cattle from his land south of town and then later land on Mount Falcon, now Jefferson County Open Space land, Mt. Falcon Park. He originally worked in a meat market, and then bought it, and was then later a hotel and saloon owner in the building next to where the Wild Bunch performed.

Central City’s Wild Bunch is frequently found in front of the Belvedere Theatre or along Main Street on Saturdays, with shows from noon to 4 p.m. at the top of each hour. From Lou Bunch Day until Labor Day, the re-enactment group walks the street to greet folks and keep frontier history alive.

On August 10th, the Wild Bunch will return to Roy’s Last Shot Restaurant in mid-Gilpin County to have a fund-raising benefit for their trip in late September to Wichita, Kansas for a gun-fighter’s convention and competition.

END_OF_DOCUMENT_TOKEN_TO_BE_REPLACED

Benefitting the county, schools, and much more By Don Ireland   This year marks the 30th anniversary of casinos opening in the former little mining towns of Black Hawk, Central City and Cripple Creek, Colorado. In those early years, smoking was allowed inside ... END_OF_DOCUMENT_TOKEN_TO_BE_REPLACED

Where the dead get to tell their story By Jaclyn Schrock On Saturday, August 21, the Gilpin Historical Society held their annual Cemetery Crawl. Tickets allowed the shuttle of hundreds of guests from the Teller House parking lot to the Cemetery. Depending on v... END_OF_DOCUMENT_TOKEN_TO_BE_REPLACED