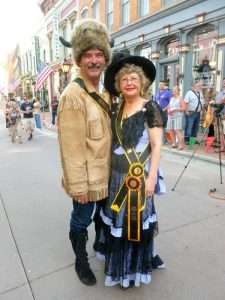 For 22 years of service in Central City

Tuesday night, December 18, 2018, as the crack of Mayor Kathryn Heider’s gavel resounds Alderwoman Shirley Voorhies will get up from her chair behind the bench in Central City’s council chambers for the final time. Each step Shirley takes from those chambers represents her walk away from 22 years of civil service to the City of Central; eight on the council and before that, fourteen years on the Historic Preservation Commission and Historic Planning Commission. On Saturday, December 8, the postal lady’s friends threw a party to honor her service to the community and years of friendship. Most Central City residents know Shirley as the friendly, helpful post office worker who always provides great service with a smile, and often a laugh. You might also recognize her as the permanent honorary madame leading the Lou Bunch parade. Along with Barb Thielemann, Shirley co-founded the Tommyknocker Bazaar; four days of fun marking the beginning of the holidays with a children’s parade, tree decorating, tree lighting, caroling, community pot-luck, and of course the rooms of local vendors in the historic Teller House.

Shirley is a Colorado native, born and raised in Westminster, and her parents often took family trips up to Central City. Those fond memories enticed Shirley, and her husband Jim, to move to Central City. Thinking back to when they first moved up here, Shirley says, “We were amazed at how open and giving this small community is. We were welcomed with open arms and in a small way, we are just giving back to this wonderful community.”

Shirley’s perspective of the community is not wrong. When people talk about her, here is what they say:

“The most hard working, dedicated person I know; fun, too!” – Kathy Heider

“The fanciest of all ladies on Lou Bunch Day!” – Sharon Cate

“With the exception of Bill Russell, the longest serving public servant in Central City.” – Jack Hidahl

“Shirley is a long-time resident postal clerk, asset to the community. I will miss her on Council.” – Jeff Aiken

“She is a Lou Bunch ancestor, always there to help.” – Deb Wray

“My friend and customer.” – Eric Miller

“A champion for historical preservation and for good times.” – Daniel Miera

“A loving wife, friend for life, partner that will always be there.” – Jim Voorhies

Shirley Voorhies leaves a lasting impression on folks leaving no doubt that she is a decent, humble, human being. Although Shirley is “retiring” from public service, she says she will be taking some time for herself, but she is not done giving back to the community. She isn’t going anywhere, and her large heart will not allow her to just stand back and watch. Thank you for twenty-two years of service to this community!

END_OF_DOCUMENT_TOKEN_TO_BE_REPLACED

Where the dead get to tell their story By Jaclyn Schrock On Saturday, August 21, the Gilpin Historical Society held their annual Cemetery Crawl. Tickets allowed the shuttle of hundreds of guests from the Teller House parking lot to the Cemetery. Depending on v... END_OF_DOCUMENT_TOKEN_TO_BE_REPLACED