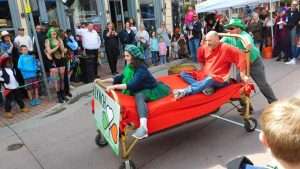 Mayor Fey asked if there were any conflicts of interest for any member of the council.  Alderwoman Tinucci reported she has a conflict with Resolution 21-13 (regarding Madame Lou Bunch Day) because she can receive monetary compensation from having a booth at the event. Attorney McAskin stated that while monetary compensation might be minimal, there could be an appearance of impropriety due to her participation in the BID and volunteer work for the event.

The Mayor called for a motion to approve the consent agenda which consisted of the minutes from the May 4 meeting and regular bill lists through May 11. Alderwoman Laratta moved to approve the Consent Agenda and was seconded by Alderman Aiken. The motion passed unanimously.

Mayor Fey opened the floor to the public for anyone who wished to speak to a topic on the agenda.

Katie Nicholson with the Central City Opera addressed council regarding the Yellow Rose Ball. She referred to a one-page document sent to Council with reasons why they are appealing a decision for street closure time. Further comments were postponed until that item on the agenda was addressed.

The Council considered approval on two Resolutions and one event permit.

Johnson – “Are we looking at upgrading the barriers? I see someone get run over (by the bed) every year.” Mayor Fey confessed he almost took out Fire Chief Gary Allen in the 2018 bed race. Fey also suggested adding port-a-potties during the event, especially for kids who delay letting their parent(s) know they have to go.

Alderwoman Laratta moved to approve Resolution 21-13 and was seconded by Alderman Aiken and Alderwoman Johnson simultaneously. The motion passed unanimously. Alderwoman Tinucci recused and did not vote.

Manager Miera introduced Resolution 21-14 which would declare support of and appreciation for the Gilpin County Sheriff’s Office. The text of the declaration is as follows: “The Mayor and members of the City Council of the City of Central declare and acknowledge their support of and appreciation for the commitment and sacrifice made by each and every member of the Gilpin County Sheriff’s Office. The City council asks that all citizens and business owners join the City Council in giving the dedicated professionals of the GCSO much-deserved support and appreciation.”

The Whereas’s that precede include statements about “officers endure long shifts and demonstrate the utmost professionalism and integrity when operating under pressure and often unpredictable circumstances,” and “the GCSO plays an integral role in our community and its members deserve the deepest respect and gratitude for their continuing service.”

Alderwoman Laratta moved to approve Resolution 21-14 and was seconded by Alderwoman Johnson.

Alderwoman Laratta commented that she has been here almost 30 years and has seen the changes the City has gone through, “Namely from the Police Department to the Sheriff’s, I’ve gotten nothing but compliments for the deputies. I love ‘em.”

Sheriff Armstrong stated, “I’m beyond words, and I’m extremely humbled by the Council’s resolution. We are very blessed.”

The Central City Opera filed an appeal of their conditional approval for their Yellow Rose Ball requesting additional time for the street closure. The original request received May 5, was for almost five hours; the appeal reduced the time to almost four hours.

Katie Nicholson reported that due to the pandemic, they have two flower girl classes in one year which doubles the participants which is why they need the longer closure. Additionally, due to COVID restrictions, they need do their performance outdoors. They are trying to maintain as many of their traditions as possible. This request is unique to this year.

Kathy Tyree of the Central City Opera re-emphasized that they have two classes of girls and over 450 people coming up. She added that the Opera considers the history of Central City and its tradition to be of extreme importance. They considered doing a remote Ball, but felt it would not be adequate.

Dena Hunter, resident of Central, expressed her concern that all the Central City residents and employees of the businesses can get in and out during the street closure.

Alderwoman Laratta moved to grant the appeal to the Central City Opera and was seconded by Alderwoman Tinucci.

Alderwoman Laratta commented that she is also concerned about the people the live west of the Opera House to “get out of town if necessary. I think we need to find an alternative to get people through town. She added that they need an emergency passage in case of fire or medical emergency. Manager Miera responded that there are alternate routes; County Road, Spruce Street, and the back road around Bald Mountain and down by Nevadaville.

Alderman Aiken expressed his concerns about “folks turning at the Methodist Church then along the High Street to the sharp turn by Johnny Z’s; many people will be coming down with trailers and ATVs and “it’s going to cause a problem. We need many traffic-control people.” He also pointed out that if they are expecting to feed 450 people, then the concern for COVID is not relevant.

Alderwoman Tinucci commented that directing large and towed vehicles over Bald Mountain Road to Nevadaville would be a good idea.

Mayor Fey agreed that the biggest issue is the ATV traffic coming down Eureka and the safety of our residents and guests in the case of an emergency. He suggested Council either articulate their conditions, or to table it until they can vote on it in two weeks.

Katrina Benes from the Central City Opera assured Council that they put no structures on the street or the sidewalks, so in case of emergency, the street can be cleared immediately.

The Gilpin Ambulance Authority has need for additional and permanent space for employees while on duty and for sleeping quarters. They have shared space with Black Hawk Fire Department and now they are looking to use some of the Apex Facility on Apex Road. There is a cost to do to renovations for their needs and Central City would be contractually obligated to pay their share which is estimated to be between $7,600 and $10,300. Alderwoman Johnson commented that until last year, they have had no permanent space and this change would be great for them. Council indicated their support.

The Belvidere Foundation submitted a budget request of $75,000 for operating expenses, mostly contractual and fundraising. They have raised just over $1,000 in donations to-date and had a starting balance of $5,000. The funds would come from the Belvidere Fund balance already reserved.

Alderwoman Laratta commented that it feels like all money from the City is going to the Belvidere. “I have been here six years and have seen very little progress, if any.”

Alderwoman Laratta commented, “We’ve all been through a strange kind of hell this past fifteen months. We deserve transparency from our elected officials.”

Alderwoman Johnson commented, “I don’t like the anti-vaxxer, pro-vaxxer labels. I know how labels feel. I know what power it gives certain groups, and I know how it gives people power to oppress people. I will not allow any woman in my circle to use labels and point fingers; we don’t know what people are going through. My children have been hurt by labels, even in this community. Do not label your neighbors; treat people with kindness and love, and if you don’t believe in that, stay away from me.”

Mayor Fey adjourned the regular meeting at 9:12 pm. The next regular Council Meeting will be Tuesday, June 1, 2021.