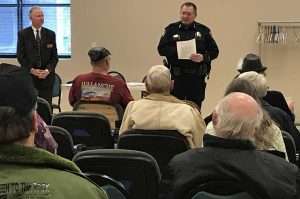 Over 60 county residents arrived to voice their concerns on Tuesday, April 29, from 6-8 p.m. at the Gilpin County Community Center. The meeting was spurred by an abundance of phone calls and emails to the Sheriff’s office regarding the recently passed Red Flag Bill that was signed into law by Governor Polis on April 12.

The purpose and goal of the meeting was to lie to rest any false misconceptions people may have of the law, while clarifying some of the language and answering questions from the group. A fact sheet prepared by Sheriff Armstrong was made available to everyone, and specifically laid out the major points of the statute. Armstrong and Wheeler spent the first twenty minutes or so of the meeting going over the fact sheet before taking specific questions.

First, the petitioner, the person bringing the complaint, must file an affidavit with the court. They must provide to the judge enough evidence to show that the respondent, the person for which the complaint is being made against, poses a significant risk to themselves or others in the near future, and either possesses or has the ability to purchase a firearm. This is called a Temporary Extreme Risk Protection Order. It is important to note that a neighbor CANNOT file this petition on another neighbor. Only family or other household members, i.e., domestic partners, common-law partners, step parents, legal guardians, or a law enforcement officer may act. The court must schedule a hearing the same day, or next court day to determine if the Protection Order is warranted. If the judge finds by a Preponderance of the Evidence, which is generally finding that a least 51% of the evidence presented favors the petitioner, or the greater weight of evidence supports its probable truth or accuracy, they will proceed with issuing a Temporary Extreme Risk Protection Order.

The Sheriff’s Office will then serve notice to the respondent in person and inform them of the upcoming hearing to be scheduled no more than 14 days from the date of the initial petition. At the time of being served notice, the respondent will be required to turn over all his/her firearms.

The respondent will be assigned an attorney by the court, or they may hire their own attorney or represent themselves during the hearing. Each side presents facts, and the judge will then determine by Clear and Convincing Evidence whether the temporary order should be made permanent. If so, all firearms recovered at the respondent’s residence will be relinquished for a period of 364 days. Clear and Convincing Evidence is defined as evidence provided by either party that demonstrates it to be highly and substantially more probable to be true than not. It is considered a higher standard of proof than Preponderance of the Evidence.

During the 364 days the respondent has one chance to request a termination of the Order by providing adequate information to the court that they no longer pose a threat to themselves or others. This proceeding would be similar in format to the previous hearing as both the petitioner and respondent will be present. The judge may decide, based on evidence presented, that the respondent is no longer a threat to his or herself and others and terminate the Order at that time. If not, the Order would continue until its expiration upon reaching 364 days. The court will notify the petitioner 63 days before the order is due to expire. The petitioner will have that 63 days to decide if they want to request a renewal. Again, a renewal of the Order would be based on Clear and Convincing evidence presented by the petitioner.

According to Steve Jensen, one of the main concerns many people have is the process by which the initial hearing is conducted. It is referred to as an ex parte proceeding which means evidence is only presented by one side. Not only is the petitioner the only one present, the respondent is not even allowed at the hearing. There is a much stronger probability of satisfying a Preponderance of the Evidence when only one side is heard and thus a greater risk that an injustice could occur.

Following are some of the issues that were brought forward for discussion:

The current law fails to address mental health issues or allow any allocation of funds for treating mental illness.

Law enforcement officers will be put at increased risk when serving a notice to a respondent and attempting to confiscate their firearms.

If a family member has been issued an order, it impacts everyone in that residence that may also own firearms.

The Safety Clause contained in the bill means one cannot file a referendum or petition to get it on a ballot so it cannot be taken to a vote of the people.

Once the respondent is served and an Order is issued their name is entered into both the CCIC and NCIC databases.

There are many ‘holes’ in the bill and uncertainties of how some of the specific scenarios may play out in court.

Some felt the Sheriff would be forced to violate the oath that he swore to uphold.

Sheriff Armstrong stated that he and the Commissioners are working together and are in close agreement on how they ultimately want to see the law enforced. The law does not go into effect until January 1, 2020 and he was quite sure a lawsuit will be placed against this and undoubtedly will end up in the Colorado Supreme Court at some point. Until that time, the Sheriff’s Office will be working on developing policies, procedures, and training so they are adequately prepared by January 1st.

The meeting was ended with a thank you from Sheriff Armstrong to all that provided questions and feedback, and also stated “I assure you that we will do the right thing for the people of Gilpin County, I promise you that.”

END_OF_DOCUMENT_TOKEN_TO_BE_REPLACED

Benefitting the county, schools, and much more By Don Ireland   This year marks the 30th anniversary of casinos opening in the former little mining towns of Black Hawk, Central City and Cripple Creek, Colorado. In those early years, smoking was allowed inside ... END_OF_DOCUMENT_TOKEN_TO_BE_REPLACED

Benefitting the county, schools, and much more By Don Ireland   This year marks the 30th anniversary of casinos opening in the former little mining towns of Black Hawk, Central City and Cripple Creek, Colorado. In those early years, smoking was allowed inside ... END_OF_DOCUMENT_TOKEN_TO_BE_REPLACED