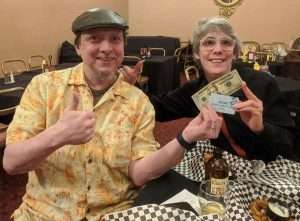 The winter months can be the hardest time to live here in Gilpin County; freezing temperatures, wind, feet(?) of snow, wind, lack of daylight, and wind, so when opportunities come about to hang out with friends enjoying a light-hearted competition with minimal cost, it lifts the spirit and helps the season to pass by swiftly. The good news is JKQ BBQ in Central City’s Teller House is sponsoring Trivia Night every Saturday evening at 6:30 pm. You can play solo or in a team to answer questions from diverse categories varying from “Where is the highest point in Colorado” to “On the television show ‘Friends,’ what is Chandler’s last name” to “Who is the first governor of the Colorado Territory?” Teams are awarded points for correct answers, team name creativity, and first to answer correctly on speed questions. Organizers of the event, bartender Rex and waitstaff extraordinaire Aspen, Aspen, and Cheyenne, aim to ensure participants (and watchers) have fun, so they keep the game moving while judging critically, but with grace. The team with the most points at the end of the night is awarded a JKQ gift card, so with an entry fee of any purchase (bar or food), it’s a win-win for customers and the restaurant.

The premier night, February 1, 2020, garnered five teams: Mid-County Minutiae Masters, Krazy Krejci’s, our Drinking Team has a Trivia Problem, Deal with It, and Older Than Dirt. The Krazy Krejci’s didn’t fare so well, although put in a fantastic effort in the final round, while the other four teams fiercely vied for first place. The Drinking Team was awarded two points for their creative name, but it was not enough to make the difference and the ultimate prize went to Deal with It who won by two points over Mid-County with Older Than Dirt coming in third. Deal with It was comprised of two casino dealers from the Grand Z that go by the names Patrick and Jane.

The Deal with It teams wants you to know that they will be back, so come on down to Central City on a Saturday night (6:30 pm) and form a team. It’s a great way to get through these months; a lot of fun while showing off your trivial smarts!

END_OF_DOCUMENT_TOKEN_TO_BE_REPLACED

Benefitting the county, schools, and much more By Don Ireland   This year marks the 30th anniversary of casinos opening in the former little mining towns of Black Hawk, Central City and Cripple Creek, Colorado. In those early years, smoking was allowed inside ... END_OF_DOCUMENT_TOKEN_TO_BE_REPLACED