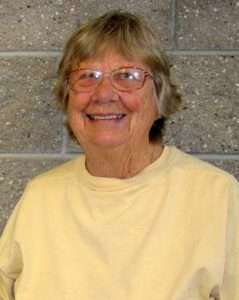 By Gilpin County Senior Living Board

The Gilpin County Senior Living Board of Directors would like to thank Sharon Perea for her immense contributions in founding and leading GCSL in their work toward building the first senior housing in Gilpin County. Sharon resigned as Board Chair at the end of August to pursue other interests indicating that she feels confident that the current Board will continue the momentum and work ahead.

Sharon shares the history of Senior Living with you. “In 2007 a small group of us were curious if people who lived in Gilpin County would wish to remain here in their later years. We created an informal survey and approached locals at the county fair. The results showed residents very favorable in having senior housing options. However, the group did not pursue the idea at that time.

In 2010 a Gilpin County Housing Needs Assessment study was completed for the Board of County Commissioners. It included a “Seniors” section explaining future various housing options which would be needed for seniors. The study results recommended a first phase of 15-30 Independent units (2010-2015) and up to 50 units by 2020.”

In 2011, Sharon was appointed by the Commissioners as the Gilpin County Representative to the Denver Regional Council of Governments’ Advisory Committee on Aging. As the Gilpin Senior representative and through becoming active in the local senior lunches and events, Sharon became aware of the importance of available local senior housing. Many seniors had no choice but to move out of the county due to having no housing options when their home was not “senior friendly” with stairs, snow shoveling, isolation, loss of partner with expenses now on one income, high home maintenance needs, no longer driving, etc.

In 2013 with the assistance of Mary Ellen Makosky, Senior Services Supervisor, a questionnaire was sent to 115 local seniors. Questions pertained to their desire to remain in Gilpin County even if no longer able to remain in their home. Would they consider independent housing? The response was overwhelmingly positive in remaining in “their” community and near their friends and senior services.

In 2013-14 Kay Johnson and Sharon began visiting Independent Senior Housing sites outside of the county to collect information and ideas on housing site models, prices, etc. In 2014 a group of interested local volunteers formed a committee and began planning the goals and steps to provide the option of affordable Independent Living for our local seniors in Gilpin County.

In early 2015 Gilpin County Senior Living was formed and received the 501(c) 3 non-profit status and several new board members joined our effort.

From January 2015 to the present, the Gilpin County Senior Living Board of Directors has directed their efforts toward the vision of providing affordable, independent living for our local seniors. They have worked closely with the Board of County Commissioners in pursuing the GCSL goal. Throughout these years the Gilpin County Commissioners have been strong supporters and in 2017 committed to helping us with a building site as well as other necessities in providing senior housing. They understand the need and desire of many local seniors wanting to remain in their community.

Over the years, Sharon brought together many people to help work toward the vision addressing a need in our county. Her ideas and energy on the Board will be missed. Sincere thanks for her tireless work from the Gilpin County Senior Living Board of Directors (Jeanne Nicholson, Rob Sawyer, Ardetta Robertson, Craig Holmes, Carol Snyder, Steve Boulter, Joe Marr, and Sandy Hollingsworth).