Serving for the sake of children 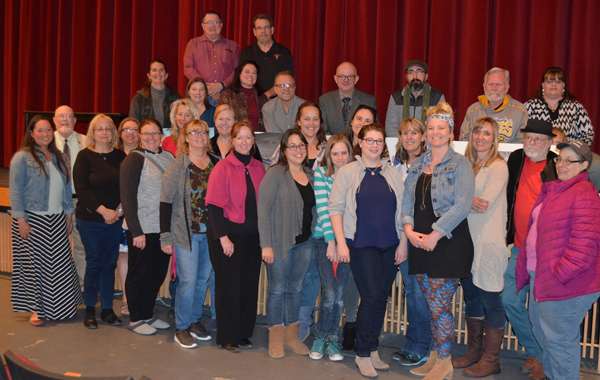 Gilpin County School held a reception on the evening of Thursday, April 28, to recognize the many volunteers who provided invaluable services to the students and staff this past school year.

“Thank you for your volunteerism,” he said. “We had well over 200 volunteers throughout the year helping in classrooms, with sports, and with various other activities.”

Leaders of the various organizations gave summaries of their groups’ activities and thanked numerous individuals. A list of the volunteers is included at the end of this article; all groups invite new volunteers.

“People are always asking me how much the Board members get paid,” Board of Education President Craig Holmes said. “The answer is, it’s a volunteer position.”

Praising all volunteers, he remarked, “I can’t think of a nobler cause than volunteering your time for the success of kids.”

Holmes mentioned an insert that appeared in last week’s edition of the Weekly Register-Call and in this week’s edition of The Mountain Ear newspapers. “Promises Made, Promises Kept” is a report to the public accounting for monies spent pursuant to promises that were made to the voters for approving a mill levy override in 2013. One highlight of the report, Holmes said, was Gilpin students’ composite ACT test score of 22.8; Colorado’s average is 20.6.

According to www.schooldigger.com, which ranks public school districts across the country, Gilpin is now ranked 14th out of 106 Colorado school districts, its highest ranking ever. Holmes credited the administration, teachers, and support staff for the progress made in the past few years.

A progress report on the campus site improvement plans followed. Excavation on an area 60 feet deep by 340 feet long will shortly begin for a new football field. The field, which should be ready two season from now, will be covered with Astroturf and be bordered by a running track. The road from the upper parking lot will be made safer with a more elongated slope, and a new staircase will be built across from the atrium. Paving and striping on the lower parking lot will begin on May 22, along with work on a new playground.

Chairperson Dick Vickery gave the District Accountability Committee (DAC) report. DACs are mandated by the Colorado legislature and made up of school administrators, teachers, parents, and community members. The DAC consults on nutrition and wellness, budget, the school improvement plan, and other matters.

Crystal Zeilbeck headed up the Montessori group. Its main purpose is to raise funds for materials for the Montessori classrooms, which are more expensive than traditional materials.

“We gave each class $500 to spend on materials or field trips,” Zeilbeck noted.

She announced the Montessori fundraising dinner and silent auction scheduled for May 5 at 6:00 p.m. in the school cafeteria and atrium. The theme for the evening is “Cinco de Mayo.”

Art instructor Curt Halsted heads the art department. He reported on the activities of the art and theatre programs, including the after-school Art Factory club on Tuesday evenings. Staff members and volunteers are welcomed to this popular program.

Halsted praised the progress of the theatre department, led by Hannah Raynes and Ryan Raynes.

“They took over a strong program. Students are becoming true performers,” he said. “The productions are growing in quality.”

Halsted said that the art and theatre programs could not function without the help of the many volunteers, concluding, “I have never seen a school with this level of volunteerism.”

Booster Club President Gigetta Nadeau expressed gratitude to multiple individuals, particularly those who played large roles. Lisa and Jack Kennedy ran concessions, and Lisa headed up the after-prom committee, which is one of the club’s biggest projects. Mary Lorenz served as treasurer, Nicki Johnson managed the Facebook page, Lisa Boulter provided a large selection of Eagle Wear, and a number of others helped with Homecoming.

Nadeau noted that Boosters supports the junior class and donates several thousand dollars each year for various programs. This past year, Boosters was able to raise and donate over $7,000.

The group recently provided two weeks’ worth of breakfasts to students during PARCC testing. Its members also provided dinners for student banquets throughout the year.

“You name it, Boosters does it. Working with this group has been one of the biggest pleasures I’ve ever had,” Nadeau said.

“The PTA is always there for teachers and students,” said spokesperson Jennifer Ferrante. She pointed out all the work done by Angela Webb and Mary Perkins, especially on the annual Halloween Carnival and Trick or Treat Street. PTA members also put on the Winter Holiday Shop and the Valentine’s Day ice cream social. They provided breakfasts during PARCC testing (“We served 900 meals this year!” Ferrante said) and will supply food and gifts for teachers during Teacher Appreciation Week.

“We buy gifts for the classrooms that the teachers put on their ‘wish lists’ at the Scholastic book fairs in the spring and fall,” she reported. “We put $900 worth of books back into the classrooms this year.”

END_OF_DOCUMENT_TOKEN_TO_BE_REPLACED

Where the dead get to tell their story By Jaclyn Schrock On Saturday, August 21, the Gilpin Historical Society held their annual Cemetery Crawl. Tickets allowed the shuttle of hundreds of guests from the Teller House parking lot to the Cemetery. Depending on v... END_OF_DOCUMENT_TOKEN_TO_BE_REPLACED

Benefitting the county, schools, and much more By Don Ireland   This year marks the 30th anniversary of casinos opening in the former little mining towns of Black Hawk, Central City and Cripple Creek, Colorado. In those early years, smoking was allowed inside ... END_OF_DOCUMENT_TOKEN_TO_BE_REPLACED