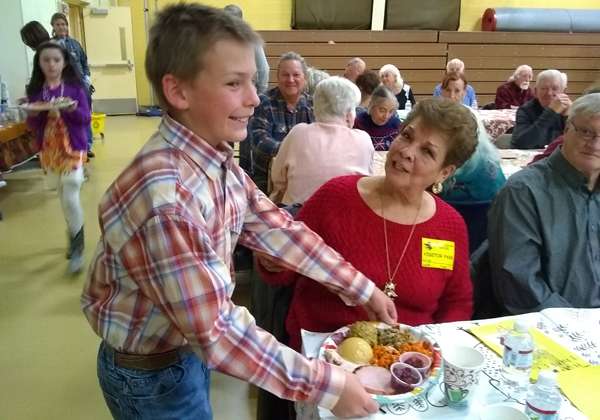 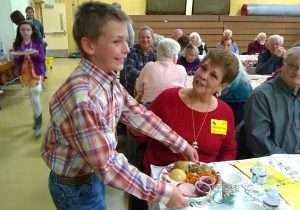 Gilpin County’s senior citizens were treated to extra-special service on Thursday, November 15, as they gathered at Gilpin County School for a hearty Thanksgiving meal. A smiling, grateful crowd of about 60 participants in the Gilpin Community Center’s senior program came for the well-loved tradition. Fifth graders from the traditional and Montessori classes held the doors open for their guests, escorted them down the hall to the old gym, served the meal, and cleaned up afterwards. Lively musical entertainment was provided by the school’s band and choir.

Ireland Simpson-Wilhelm, Lola Keller, Jadie DiMauro, Maddie Sutton, Paul Ferrante, Maddox Cooles, Roy Adler, and Devyn Bulger were the young servers this year. They were practicing the fine art of courteous service, and from all accounts did a fantastic job.

“The best part is the kids,” declared Donna Parman as she and her husband Bruce enjoyed the lunch among their friends. “This is so good, so special.”

Olivia Pohl called attention to a hand-made card she had found on her seat. A turkey adorned the cover, and on the inside, a sweet but slightly misspelled message read, “Thank you for being a part of our comootety.” Each diner received an original message.

Beth McChesney recalled past dinners, noting how the event has grown, and commented, “All the children are wonderful and want to please us.” She pointed out how much it meant to so many folks.

“A lot of us don’t have family around.”

The event was made possible by the efforts of many. Mary Ellen Makosky, director of the senior program, helped her group turn out for the meal. Food Service Director Jane Yerkman headed up the efficient and skilled kitchen staff, who prepared a sumptuous feast of turkey, ham, pumpkin pie, and numerous sides. Elementary Secretary Joni Schmidt coordinated the children’s efforts, while Elementary Principal Heather Huntoon graciously circulated among the guests with coffee refills. Tables were festive with harvest-themed tablecloths, paper plates, and cups. Teachers Vanessa Grenader and Jackie Walby also assisted. While the seniors enjoyed the food, Superintendent David MacKenzie welcomed the assembly and thanked them for coming.

The middle/high school band and choir, under the direction of Misty Ebers, performed several tunes for the listening pleasure of the audience. Christmas songs were interspersed with music from recent concerts. The musical program concluded with a sing-along to “Jingle Bells,” accompanied by the rhythmic ching-a-ring of sleigh bells.

After the kitchen staff had served the seniors, they geared up to feed the students. All told, over 400 meals were being served that day. The cooks certainly had a lot of “broth” to stir up, but they were able to take a quick break to receive the enthusiastic applause of the children and guests. Staff included Jane Yerkman, Arlene Garcia, Addy King, Lisa Kennedy, Cody Ramsey, and Abby Kennedy.

All too soon, the food, entertainment, and senior-student visiting were over. Pupils helped their visitors wrap leftover food in metal foil, cleared tables, and hauled their instruments back to the band room. Seniors said good-bye and thank-you and made their way to their cars.

The room was empty. Even so, the warm color of thanksgiving lingered, with its memory of shared smiles, hands clasped in fellowship, and the soft echo of voices young and old raised in song. Until next year… 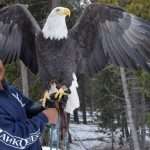