School Board learns about Internet safety and anti-bullying efforts 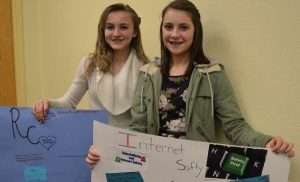 The Gilpin County Board of Education met on February 17, 2015. Members present were Brook Ramsey, Charlotte Taylor, Kersten Armstrong, and Craig Holmes (via telephone); Steve Boulter was late due to another engagement. Superintendent David MacKenzie, Elementary Principal Scott Eldred, and Secretary to the Board Robin Cortez were also present; Secondary Principal Alexis Donaldson was absent.

The Board welcomed Wendy Moore, the new nurse consultant. Moore fills the position being vacated by Gwen Schmalz, who is moving on to help with a family business. Moore has been with Children’s Hospital for the past six years, has worked as an emergency room nurse, and also has a teaching background. She has four of her own children and said she has always worked in pediatrics. She will be at the school from 9:00 a.m. to 3:00 p.m. on Mondays and will be working with nurse’s aide/health technician Connie Oliver, who is at the school daily.

The Board approved Robin Hoffman as a substitute bus driver.

MacKenzie noted that the PTA had provided a Valentine’s Day ice cream social for the elementary school on February 12.

Eldred commented, “It’s a new tradition to me. I thank the PTA. It was fun, and there was lots of sugar consumed!”

Eldred also reported that there is a student teacher in the third grade, Sarah Hirsch, who will be working under teacher Kellie Bayne. The student teacher is from Nederland and is studying through an on-line university.

The young people summarized a special Internet safety presentation that had been given at the school in January. Mariah told what she had learned about staying away from Internet predators, and Kasen added information about the importance of not talking to strangers on-line or meeting them personally. The girls commented on the danger of sending nude or partially nude photos of oneself over media, because the photos could be passed on to others.

“You can also get in trouble with the law and with your parents,” Mariah said, mentioning the possible embarrassment and loss of trust.

The students had organized their information on a colorful poster.

Mariah and Kasen also recounted the fall presentation of Rachel’s Challenge, showing the Board a Power Point program they had put together.

“The whole point is to try to get people to make the best of the world by helping and making friends with others,” Mariah remarked. She and Kasen told the Board about projects students are doing, such as “Notes of Kindness,” which are compliments written on Post-It notes and stuck to lockers; or envelopes with Valentine’s Day jokes and Dum Dum pops placed on lockers. The elementary school has linked paper chains with positive comments, and the middle and high schools have taken photos of people’s hands and written good thoughts on them to post on the walls.

Goodlett advised that the school’s Friends of Rachel Club has about 25 members in the middle school and high school. Kasen expressed the students’ approval of the club, because they can all be together without forming cliques.

Goodlett added that there was a contest during first semester to see which class could be the kindest to others; the upper Montessori class was judged the kindest.

“We are trying to stop bullying, and our school is becoming a better place,” the girls concluded.

The Board approved the memo from Business Manager Terry Scharg, who said that the 2015-16 budget process begins this month.

Scharg’s memo stated, “If the supplemental funding request [of the Colorado Department of Education] is … adopted by the legislature, Gilpin’s estimated PPOR for 2015-16 could increase to $8,827.07, or an estimated net change of $53.13 per pupil. If the supplemental funding request and the Governor’s request is approved for a one-time buy-down of $200 million of the negative factor, Gilpin’s estimated PPOR could increase to $9,111.02 or $282.94 per pupil.”

MacKenzie reported that the electronic marquee had been ordered and is expected to arrive in three or four weeks. He had talked with the custodial staff about getting Plexiglas reinforcement for the marquee to guard against wind damage. He also said that the wireless sign will have the capacity for either one long line of data or two shorter lines. Cortez will program the sign, and the goal is to rotate the message every couple of days.

MacKenzie said work continues on aligning curriculum with state standards, incorporating technology in teaching and learning, and frequent progress monitoring to help with remediation and enrichment.

Elementary teachers are reviewing textbooks from three different publishers for student use in literacy, including reading, writing, and communicating. The teachers may choose from the three publishers as a baseline resource.

Curriculum development for math and literacy is ongoing in the elementary school.

Staff members are preparing technology as they get ready to administer PARCC (Partnership for Assessment of Readiness for College and Careers) tests in March. The question, MacKenzie said, is, “Can we get everybody on-line at the same time?” He said that all computers will be on at the same time for a practice session, and all is prepared for the testing itself.

MacKenzie gave an update on repair to the wind damage the building sustained in January. “The state fire marshal will review the design for the replacement wall, because the wall serves as a fire wall,” he stated. The final wall design and the fire marshal’s review are both pending. When the design is approved, bid specifications will be advertised for submission. MacKenzie hopes that construction can begin during spring break.

MacKenzie said the school’s insurance company will likely cover the full amount of the damage, less the deductible. That will include the wall design, the marquee, and replacement of one set of bleachers.

Eldred said that Ellen Hunter, literacy specialist from the Colorado Department of Education, is meeting with the staff to support professional development in reading. “These are baby steps as we get more in line with student needs and Common Core,” Eldred noted. He has conducted mid-year meetings with the teachers and is scheduling formal observations for the second semester.

The SOAR student awards for December and January were held on February 2; Eldred thanked Boulter for attending the celebration.

Eldred and MacKenzie and the Montessori teachers will attend Montessori professional development on February 21 in Boulder.

A tentative schedule for PARCC testing has been set. Eldred stressed the need for cooperation of parents to have all children to school on time each day to avoid unnecessary noise and distractions in the hallways. The PTA will sponsor breakfast on the testing days.

Donaldson’s written report highlighted formative assessment training for the staff. Like the elementary school, the secondary school is preparing for the PARCC assessment.

Five students will attend the Gifted and Talented Legislative Day the week of February 23; two students have been selected to shadow local legislators for the day.

END_OF_DOCUMENT_TOKEN_TO_BE_REPLACED

Benefitting the county, schools, and much more By Don Ireland   This year marks the 30th anniversary of casinos opening in the former little mining towns of Black Hawk, Central City and Cripple Creek, Colorado. In those early years, smoking was allowed inside ... END_OF_DOCUMENT_TOKEN_TO_BE_REPLACED