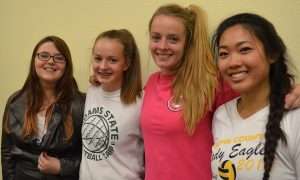 Recent athletic contests were mentioned: the high school football team’s home win on September 13 against West Grand, the middle school football’s 3-0 season, and the high school varsity volleyball team’s away victory against Nederland on September 13. Donaldson, who coaches the volleyball team, said she and the team appreciated the great support at the game. Middle school volleyball’s season began this week. There have been many students participating in cheerleading.

Secondary students Alyssa Chareunsouk, Delaney Lepro, Cicely Lepro, and Cheyenne Jackson were present to tell the board what they are learning so far this year. The girls are students in English teacher Jeff Schuessler’s class; he was also present. The students told what they are doing in class and how peer-monitoring, self-monitoring, and feedback are going.

Chareunsouk began by telling the Board about progress in AP (advanced placement) English. The class has been studying “Walden” by Henry David Thoreau, analyzing his work and taking quizzes twice weekly on literary terms. The students are incorporating what they are learning about his literary methods as they work on essays. As they evaluate their peers, they discuss how to improve their work and how to get the highest grade on their papers.

Delaney Lepro discussed the writing transitions and summaries. The students read each other’s papers and work on the logical flow of ideas as they transition from one topic to the next. “We break down each sentence,” she noted.

Cicely Lepro told of students analyzing stories, establishing the theme, and giving their opinions, using textual evidence to support their claims. “We keep folders to write down our goals and provide evidence of what we’re learning,” she said. “We work on revising and editing – not just on proofreading for grammar errors, but rethinking our papers.”

Cheyenne Jackson spoke of learning the meanings of words, including their roots and prefixes.

School counselor Kirsten Goodlett introduced Kalie Midcap, who is serving as a counseling intern on Mondays and Tuesdays. Midcap has also been approved as a substitute teacher on Wednesdays and Thursdays.

“I went to elementary and middle school here,” Midcap told the Board, noting that many changes had taken place since her Gilpin student days.

Ariel Planck, a Gilpin student who is president of the Elks Club’s youth organization, Antlers, requested that the Board consider allowing the Antlers to put on a 1.5K and 5K walk/run to raise awareness of bullying. Planck said the group would like to have publicity put up inside the school. She noted other programs that the school had supported, such as Safe2Tell and Rachel’s Challenge.

The event would be a “color run,” where colored corn starch is thrown at the runners as they pass each kilometer.

The Board said they would consider Planck’s request.

Business Manager Terry Scharg noted in her memo that she had received the preliminary gross assessed valuation for the current school year from the Gilpin County Assessor’s Office. The valuation is $291,877,830, which is $484,043 less than the previous year’s assessed valuation. “The value has decreased because Black Hawk is purchasing property and making it tax exempt,” Scharg said.

Cortez had sent an e-newsletter last month and will do so each month.

The “Alert Now” call system is being upgraded.

This week the Superintendent was hosting a Q&A for parents. He plans to do so once per quarter as part of the school’s communication plan.

Donaldson reported on the results of the first round of STAR (Standardized Testing and Reporting) tests. In math and reading, roughly half or slightly more than half of students in sixth through tenth grades tested at or above the 50th percentile, while the remainder tested below. Donaldson advised that the screening numbers had been raised, because they had not been thought to be high enough.

Holmes commented that reading for sixth and seventh graders is “our Achilles’ heel.” Donaldson said that the skills of those students falling below the 50th percentile were being addressed.

Donaldson gave special thanks to the Booster Club for running the Hospitality Suite at the Gilpin volleyball tournament over Labor Day, which was a 12-hour event.

Eldred also addressed the STAR testing data. He noticed a trend that upper grade level reading skills are not testing as high as the lower grades. If there is a basic skills hole, Eldred said, the student can’t compensate when the rigor increases. He noted that a guest speaker for an in-service day last week had focused on “root cause analysis,” finding the reason for problems in skills. Eldred said that students with deficits will get additional help in small group settings.

“It’s workable,” he assured. “There are other adults besides the teacher that are providing support. Classes of 24-26 students are not the norm here, but they are the norm elsewhere.”

Eldred mentioned the book fair being sponsored by the PTA this week, as well as the Trick or Treat Street event to be held on October 31 from 5 to 9 p.m.

On the first late-start Wednesday, teachers received an online webinar training on the implementation of Aimsweb, a new progress monitoring tool that will be used in conjunction with STAR assessments.

Patrick Linnehan, technology teacher, will sponsor this year’s “Super School News” candidates. Esmee Halsted and Hailey Stundon will work with Linnehan and Rocky Mountain PBS to produce a two-minute newscast that will be recorded on October 15 and broadcast on PBS shortly thereafter. It will be available online right after the taping. Taylor suggested putting a link to the newscast on the school’s website.

MacKenzie commended the language arts students for their presentation to the Board that evening.

MacKenzie and Cortez are putting together an application for volunteers for the Board’s review. MacKenzie said that the Colorado Association of School Boards does not have a specific policy on volunteering, nor did the other districts he had checked with.

Enrollment is now at 429 students; 384 is the projected funded count.

The next item in updating technology will be an active directory, where users will have access to email. A couple of wireless connector points are also needed to have full coverage. A video streaming difficulty with a Common Core content site has been remedied.

An emergency management plan is being worked on. MacKenzie advised that the School Resource Officer, Lee Ramsey, will present emergency procedures to the teachers his week, and added that each teacher will have a quick reference guide to use in case of emergency.

The next meeting will be October 6 at 7 p.m.

END_OF_DOCUMENT_TOKEN_TO_BE_REPLACED

Where the dead get to tell their story By Jaclyn Schrock On Saturday, August 21, the Gilpin Historical Society held their annual Cemetery Crawl. Tickets allowed the shuttle of hundreds of guests from the Teller House parking lot to the Cemetery. Depending on v... END_OF_DOCUMENT_TOKEN_TO_BE_REPLACED