School Board gets down to business for the 2017-18 year 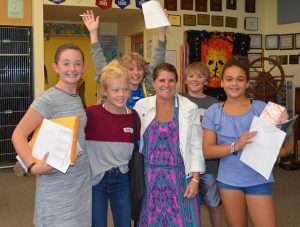 The Gilpin County Board of Education was back in session this week after a summer break. The Board met on Tuesday, August 15, at 7:00 p.m. All members were present: Craig Holmes, Brooke Ramsey, Charlotte Taylor, Kersten Armstrong, and Steve Boulter. Also present were Superintendent David MacKenzie, Secretary to the Board Joni Schmidt, Secondary Principal Alexis Donaldson, and Elementary Principal Heather Huntoon.

Principal Huntoon introduced Misty Ebers, who will teach elementary music and secondary choir and band. Ebers previously taught in the Brighton 27J District for 18 years. She mostly taught middle school, but also did some instruction in elementary and high school.

Ebers explained her two main goals: first, a personal goal to broaden her teaching to general music; and second, a goal to recruit students and build the program.

“I want to give the students any and all opportunities, including marching band, jazz band, and All-State for secondary students and bring back excitement in the elementary school. You guys WILL be supportive!” she cheerfully informed the chuckling Board members.

The Board approved the check vouchers, financial statement for July, and human resources report. Among the site improvement expenses were $39,853 paid on June 20 and again on August 2 to M&M Tank Coating Company, Inc. for work done on the water tanks and $259,600 on June 20 to Jim Noble, Inc. for excavating.

The Board will hold elections this year. Secretary to the Board Joni Schmidt was designated as the District’s November 7, 2017 Election Official. Taylor’s and Boulter’s seats will be up for election.

Superintendent MacKenzie informed the Board that he is completing a 40-page application for the 2017-2018 Every Student Succeeds Act Consolidated Program Grant. (Previously, this was known as “No Child Left Behind Act.”) He explained that Gilpin Elementary is a Title assisted school and gets some financial assistance for some programs.

Under Title I, $14,716 will be used for a reading interventionist for kindergarten through fifth grade students with identified reading deficiencies. Services will be provided in addition to classroom instruction.

Under Title II, $11,250 will be applied to professional learning to increase principal and teacher effectiveness.

Under Title IV, which is new, $9,417 will be allocated to professional learning tools for teachers relating to educational resources and technology.

Donaldson reported that the staff has been reviewing last year’s data, including PSAT and SAT scores, and all looks good so far. The first couple of days back at school had gone well, and there were lots of new students.

“We had a fun Back-to-School night,” she said. “We did things differently and didn’t corral everyone in the auditorium. We just sent everyone directly to their classrooms and did schedule changes with the Chromebooks.”

Fall sports are up and running, including football, volleyball, and cheer. A camp was held last week for middle school volleyball.

Plans are in place for grades one through twelve to go outside and view the solar eclipse during its peak time at around 11:45 on Monday, August 21. Protective eyewear has been obtained through NCAR (National Center for Atmospheric Research). Parents may opt their child out of the activity if they wish.

Huntoon concurred with Donaldson that student data looked good and the staff was happy with it so far. She said everyone had a great first day, and Back-to-School night went well. The children were excited and happy. The driveway change seemed to work well.

“We can’t wait for the playground to be finished,” she added.

MacKenzie gave an unofficial student count, saying that enrollment was uncertain yet. Based on the students who actually came to school this week, there were about 235 in the elementary, 130 in the middle school, and 120 in the high school. This is an increase of 25 to 30 students from last year.

“This is a testament to Alexis’ and Heather’s efforts and the publicity we have done,” Holmes said. “We’ve had several out-of-district open enrollments.”

MacKenzie updated the Board on the vacant receptionist’s position. “We have a number of applications and will be going through them soon and be ready to offer someone a position in the next few weeks.” A substitute is currently working the front desk.

The opening morning of school was different for the staff this school year, with a convocation. Jared Polis, a Democrat in the U.S. House of Representatives for Colorado’s second congressional district, spoke on “The Power of One.” His theme was that one never knows what kind of influence as a teacher, coach, etc. they will have on a student. Craig Holmes represented the Board of Education, speaking on the importance of one customer in his convenience store industry; he related that to the importance of one student and the influence that one person can have on a student. MacKenzie thanked the food and business services and BOCES (Board of Cooperative Educational Services), the Gilpin County Sheriff’s Office and other first responders, the transportation department, counselors, secretaries, and community.

MacKenzie then turned to state testing achievement. “We are at or above the state average on 15 of 20 tests. The tests are becoming what they should be: an opportunity to see whether the students are aligned with what they should know and be able to do.” He praised teachers, principals, and parents for their efforts and declared, “We’ll stay the course. It’s sustainability that is important and staying focused on professional development. We are turning a corner and seeing the fruits of our labors.”

He next reported on site improvement work, noting that a lot has been done in the past eight weeks. The playground is not done yet; MacKenzie said this could be blamed on the rains. He believed the construction should be done in a few days, but the fence still needs to be put in and the playground inspected by the Office of Fire Prevention and Control. Some mitigation had to be done because of erosion on the south side of the parking lot due to the monsoon rains. These have caused erosion and washout throughout the county.

“We’re all done up top. Look at the cliffs we created,” he added, referring to the excavation near the cabin and the bus barn. He stated that it’s time to look at next steps in this area.

Summer painting and cleaning was completed. 38 classrooms got some paint, with 20 of these being fully redone. All the floors were waxed.

Gilpin County Sheriff safety training was held in July. All deputies except one were trained in active shooter scenarios and became familiar with the school layout.

There are still a few details to work out with the new traffic set-up. Stop signs and informational signs should arrive and be installed in a few weeks.

The Weekly Register-Call ran MacKenzie’s article on the south parking lot in the August 4 and August 10 editions to make people aware of the traffic changes. MacKenzie’s article about student achievement on state assessments is in this week’s edition.

The wireless network was updated over the summer and access points improved and their number increased. The District is making an active effort to transition to being more on-line and as paperless as possible. The goal is to have registration be on-line.

The Board adjourned the regular session of the meeting and went into executive session regarding matters that may be subject to negotiation.

The next meeting is scheduled for Tuesday, September 5, at 7:00 p.m.

END_OF_DOCUMENT_TOKEN_TO_BE_REPLACED

Benefitting the county, schools, and much more By Don Ireland   This year marks the 30th anniversary of casinos opening in the former little mining towns of Black Hawk, Central City and Cripple Creek, Colorado. In those early years, smoking was allowed inside ... END_OF_DOCUMENT_TOKEN_TO_BE_REPLACED

Benefitting the county, schools, and much more By Don Ireland   This year marks the 30th anniversary of casinos opening in the former little mining towns of Black Hawk, Central City and Cripple Creek, Colorado. In those early years, smoking was allowed inside ... END_OF_DOCUMENT_TOKEN_TO_BE_REPLACED