School board approves preliminary budget for 2019-20 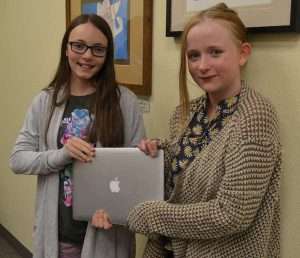 The Class of 2019 graduation ceremony was held on Saturday, May 18. The graduates received $244,700 in scholarships.

Stephen King represented Gilpin at the state track meet and won second place in the 300-meter hurdles. Boulter noted that the new track helped the middle and high teams make great gains. The middle school team had a great season and broke many records, with the eighth-grade girls winning the Frontier League. Fifth and sixth graders were first in the junior league.

April and May Artists

Art teacher Curt Halsted introduced April artist Ashyr Trumble. The fourth grader created an original dot painting of an Australian kangaroo. The project was integrated with history lessons on explorer James Cook and on the Aborigines.

First grader Otto Holland was honored for his painting of a black bear. The painting was also part of integrated studies in language arts and music. The elementary students had written poetry and created corresponding art, and the poetry was set to music for the spring arts program.

Seventh-grade students from Sam Wardell’s language arts class presented videos that they had produced on “The Keys to Success.” Linda Icenogle and Anna Thomason said the video project was an alternative to writing papers and giving speeches.

“We created the videos with guidelines on music and speech,” Anna said. “The technology helps us, because it is simpler and easier for students who find it difficult to give speeches.”

“We had to make sure we had enough words in our script and time the length,” Linda said.

The students were able to use Wii video, which the girls said gave them creative freedom.

Donaldson especially thanked the Booster Club for the countless hours they put in during the final month of school.

Sam Wardell organized a trip for students to see “The Diary of Ann Frank” at the Arvada Center.

Preparations are under way for the staff summer institute in Evergreen June 3-4.

Students, staff, and parents will volunteer for the Dirty 30 foot race in June for the benefit of the athletic department.

The week of May 6 was staff appreciation week, with treats and a Gilpin travel blanket provided by the District and the PTA.

The trout release will be May 28 at Mayhem Gulch Juniper Loop Trailhead.

Ten teachers will participate in the Science and Social Studies workshop at Gilpin June 5-6, when they will work on creating units that are standards aligned.

Ms. Ary will attend an intense Montessori training program this summer to prepare for the position of Montessori Primary teacher in Gilpin’s Choice Montessori Program.

The Board approved check vouchers for May and the preliminary June budget for 2019-20 and the revised adopted budget for 2018-19.

Business Manager Terry Scharg explained some significant changes to the June budget. General fund revenue increases totaled $421,007, including a state increase in kindergarten funding of $122,000; a reduction in the negative factor for a revenue increase of $122,827; and a SAFER grant for security equipment of $176,180. Scharg said the state plans to distribute 80 percent of the funding for full-day kindergarten in July and the balance in December.

Board member Swanson inquired about budgeting for soccer, and MacKenzie replied that he is waiting for an estimate of expenses from the Athletic Director. A supplement to the budget will be prepared at that time.

MacKenzie praised art and music teachers Curt Halsted and Randi Ebers, saying the spring arts programs were the best he had seen in six years and were a good example of teacher collaboration and cross-curricular delivery. He also appreciated Wardell’s work with his students in producing the “Keys to Success” videos.

MacKenzie expected the report to be in any day on the wastewater treatment plant project, which will include options to repair the plant so that it works better. The Board will have until June 30 to make its recommendations.

Contractors were out last week to re-measure for the atrium stairs project. The stairs will be built offsite and trucked in, and the project is estimated to be done around mid-June.

The District is ready to move forward on the school security disbursement grant and the vestibule project. MacKenzie has applied for a permit and believes the project will be done in the next 1 to 1-1/2 years.

Paper cards will no longer be used to communicate parents’ emergency contact information. Instead, parents will be asked to go into their portal on Infinite Campus on the school’s website and enter emergency contact information electronically. MacKenzie will send a dedicated email to parents with a link to a video on how to do this. The link will also be embedded on the school’s website. All registration will be done online for ongoing students.

Back-to-School Night in August will incorporate some changes, with secondary students coming in the afternoon to finish their electronic registration.

A lockout was done on May 20. The Gilpin County Sheriff’s Office responded within one minute, as did the school.

“We are always on lockout from 8:00 to 4:00,” MacKenzie said, “but yesterday’s lockout was done to heighten awareness. It lasted about ten minutes and showed that the system worked as it was supposed to. We debriefed afterward with the crisis response team.”

Colorado district superintendents will meet over the summer with safety personnel from the state. MacKenzie will report to the Board on the implications for Gilpin.

The Board eliminated its June 4 meeting, as there won’t be enough members for a quorum. It will convene again at its scheduled June 18 meeting. A public forum/proposed 2019-20 budget work session will begin at 6:30 p.m. in the school boardroom. The regular meeting is at 7:00 p.m.

END_OF_DOCUMENT_TOKEN_TO_BE_REPLACED

Benefitting the county, schools, and much more By Don Ireland   This year marks the 30th anniversary of casinos opening in the former little mining towns of Black Hawk, Central City and Cripple Creek, Colorado. In those early years, smoking was allowed inside ... END_OF_DOCUMENT_TOKEN_TO_BE_REPLACED